There are musicians whose talent is so versatile that trying to guess what they may come up with next is pretty much futile, and anything they get their hands on turns out rather brilliant. One of them is Joel Hoekstra. Known for his work with Whitesnake, Foreigner and Night Ranger, he also dabs into jazz/fusion, writes fantastic acoustic pieces, while also playing on no less than Broadway (‘Rock of Ages’), working with… Cher, providing online guitar lessons, writing a column for the Guitar World Magazine… and the list goes on.

We will soon have the pleasure of talking to Joel about all this, but in the meantime, let’s focus on his most recent work: the second album of his project Joel Hoekstra’s 13 called Running Games.

Those of you who follow Joel’s career will remember that in the first album Dying To Live, the vocal work was shared by Russell Allen and Jeff Scott Soto, two of the most powerful voices on the current progressive metal scene. This collaboration, as a matter of fact, is yet another piece of the puzzle called Joel Hoekstra: all three of them perform in the massive project TSO (Trans-Siberrian Orchestra).

This time around, the lead singer’s role in the album has been delegated to Sir Allen, while Soto is taking the back seat without which the whole project wouldn’t feel complete. The unity of their voices works perfectly, particularly good examples being the tracks ‘Heart Attack’ and ‘Fantasy’. The joined-up vocal work in songs like these, where there are no leading vocals per se, makes them sound particularly interesting, and a bit like Whitesnake’s type of music.

The end result of this collaborative effort is a project that is as much Joel’s as everyone else’s: each of the members of the band (if you could call it that) has left their own stamp, making sure they do so amazingly well. Which is hardly surprising, bearing in mind who they are: Russell Allen (lead vocals – Symphony X, Adrenaline Mob, TSO, Allen/Lande, Allen/Orson), Tony Franklin (bass – Whitesnake, Quiet Riot, The Firm), Vinny Appice (drums – Dio, Black Sabbath, Heaven & Hell), Derek Sherinian (keyboards – Dream Theater, Sons of Apollo, Black Country Communion), and last but not least — Jeff Scott Soto (backing vocals – SOTO, Sons of Apollo, Talisman, TSO, Journey, Yngwie Malmsteen). If this is not a supergroup, then what is!

Renowned for his virtuoso guitar skills, Hoekstra once again proves his point that for him it is all about melody and not so much about technique. He could have chosen to do elaborate long curvy solos – like many, but he didn’t. This is good old hearty melodic rock at its best. You may hear a hint of something to remind you of the old goldies: in the track ‘Fantasy’, for instance, there is a bit of a blues mood and riffs taking us back to the era of ‘Stormbringer’. Or you may spot a taste of Whitesnake (‘Heart Attack’). Just about enough to keep you guessing and interested. Or how about something more funky? Voila: ‘Reach The Sky’.

Joel’s play with musical styles and genres is endless. The opening track starts with a classical power/prog metal intro – so classical that you almost expect to hear Timo Tolkki to follow, wondering if you may have picked up in error one of Stratovarius’ old albums.

The glue that holds everything together is, of course, the good melody. Catchy tunes form the canvas underlining the entire album. The guitar work is, as expected, immaculate, in many different ways. There are some delicious solos and multi level guitars (‘Lonely Days’), brilliant lyrical guitar lines (‘Cried Enough For You’). There is also stuff that could be classified as mainstream, like the first track released ahead of the album, ‘Hard To Say Goodbye’, or ‘Lonely Days’: they have all the commercial potential of becoming hits.

A personal favourite in terms of composition is ‘Cried Enough For You’, with a romantic tune being promptly replaced by a steady heavier section, and frequently changing pace. This piece also evidences the versatility of Russell Allen’s vocal talent. In the ballad parts, he sounds just as he tends to in Symphony X, while the heavier episodes bring out another dimension of his voice: the one you will hear in his own projects like ‘Atomic Soul’. It is impossible to get enough of this voice. His style varies from song to song, showcasing vocal skills from all possible angles: from that angelic singing we associate with ‘Candlelight Fantasia’ (‘Running Games’), to his “proper” metal roaring known from Adrenaline Mob (‘Take What’s Mine’).

Two particularly beautiful songs are ‘How Do You’ and ‘Running Games’. Sir Allen’s high tones are delivered in his own unique way familiar from Symphony X’s masterpieces ‘Swan Song’ and ‘Without You’ (Underworld 2015).

The title song ends the album on a gentle note, as if taken from a fairy tale. The lyrical mix of cello, violin and percussion in the background calls for peace and serenity.

Nothing else to be said but thank you, Mr Hoekstra, and looking forward to interviewing you soon! 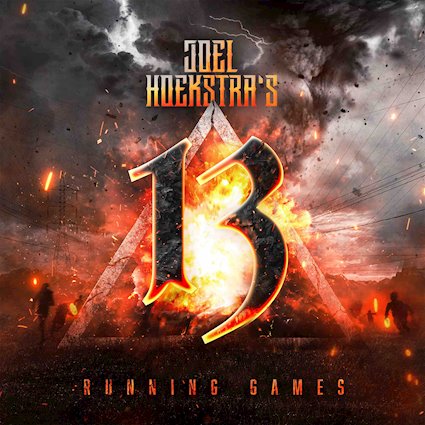