I know, I know. Another live Joe Bonamassa CD/DVD and this one is a double  header – it’s one of his themed show releases (the 3 kings – Freddie, Albert and B.B.) and an iconic venue (L.A’s beautiful Greek Theatre). And I know that there’s now an EU mountain of live JB albums but give this one a chance, it may well be his best yet.

So, at dusk on a balmy LA night, Joe and his 11-piece band step onstage (Bonamassa in his regulation suit ‘n shades) and launch into ‘See See Baby’. By song 3 of the 6 song Freddie King section they are fully warmed up, nay, smoking. The slow blues of ‘You’ve Got To Love Her With A Feeling’ is simply stunning – Bonamassa is becoming increasingly good at these, his solo building in power and emotion. Seriously – any doubters (of which, I admit, I was one) just watch this one song and believe!

Next up is the Albert King segment and no warm up is required – the band immediately nail that Stax sound that King (as the only blues artist on the label) patented. Interestingly (to guitar geeks) Joe plays this whole section on ‘Lucy’ – Albert King’s famous Flying V guitar – now owned, equally interestingly, by one Stephen Seagal. Go on, look up King on Google Images…there it is!

Robbie Krieger (he of The Doors) once said of this guitar, “…it was super-heavy Korina wood, and I think the neck was bowed a bit. It seemed like the strings were about a half inch off the neck! I said ‘how do you bend those heavy strings?’ His hands looked like hams!”. The guitar does indeed look intimidating, seemingly hewn from a particularly mighty oak. And all credit to Mr. B, he seems to wrestle Lucy into submission with ease…erm, so to speak. While the band cooks with that Southern soul sound Bonamassa wails away, his solo’s fluid and fiery, getting that big old King tone effortlessly. They lock into the huge groove of ‘Oh, Pretty Woman’ and then it’s time for the main event…

The B.B.King section. The King of the blues. Bonamassas hero, mentor and friend, gone a mere two months when this gig was played. Things immediately seem to step up another level. No way was Bonamassa going to tread water or fuck this up. The backing singers come into their own here, particularly Mahalia Barnes, while Joe absolutely hits that B.B. note. ‘Nobody Loves Me But My Mother’ is vintage, JB sounding like himself and B.B. For ‘Hummingbird’ he straps on a Strat – a guitar that always seems to bring out the best in him – for a stunning high point and epic finish to the main set.

Then it’s all over bar the encores – 3 songs. One signature tune each – ‘Hideaway’, ‘Born Under A Bad Sign’ and, obvs, ‘The Thrill Is Gone’. So, I guess the question is, do I need another live Bonamassa album in my life? I’m afraid the answer is yes. In fact, if you only actually need one then it should be this one, it’s damn near definitive ( until, fingers crossed, the tribute to Clapton, Beck, Page arrives?). The performance is incredible, the production is warm and on point and it is all absolutely beautifully filmed, it’s a sumptuous joy to watch. As ever, this will be released in multiple formats and variations – CD/DVD/Blu-Ray/ Vinyl etc. so choose your poison and enjoy an artist in his prime. 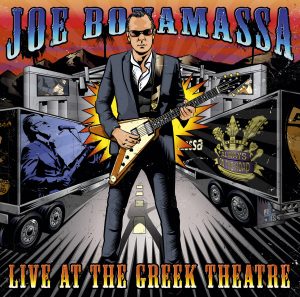