Joe Bonamassa. Small venue. Tribute to the mighty triumvirate of Clapton, Beck and Page. For any right-minded blues rock fan this is a no-brainer. It would take a certain kind of special to fuck this up. All Mr. B has to do is show up, plug in and steer clear of any radical barber shop quartet reworkings of beloved songs and job’s a good ‘un. But fear not, Bonamassa isn’t one for performing on cruise control, tonight he delivers – and then delivers more. Much more.

Bonamassa had already stated that this short run of shows may well be the last themed tribute shows he ever plays so excitement and anticipation were running high. On the dot of 8pm the man himself and his band saunter casually onstage and blast into ‘Becks Bolero’ – not the easiest song to play and it’s treated almost like a (thrilling) warm up. The sound system is incredible, almost painfully loud at times but always crystal clear, you don’t miss a note!

By the time they rip into Beck’s ‘Let Me Love You’, they’re smoking. The band dropping out while Joe plays a stunning, delicate, pin-drop solo before ramping it up again with ‘Spanish Boots’, a long standing live favourite. It’s interesting to note that all of Beck’s songs played tonight are from ‘Truth’ and ‘Beck Ola’. In fact, credit is due to Mr. B for the choice of songs tonight. He never plays it safe (which he could so easily have done) – there’s no ‘Stairway’, no ‘Crossroads’, instead we are treated to a fascinating mix of deep cuts and brave choices.

Next comes one of the evenings high points, an extraordinary, lacerating take on ‘Double Crossing Time’ from The Bluesbreakers legendary ‘Beano’ album – the album that gave birth to Clapton as ‘God’ and the blueprint for the modern guitar hero. Bonamassa nails it and then some. He really is growing into his bluesman status and his solo is a thing of firestorming, sublime beauty.

The intensity levels never drop. JoBo (sorry Joe) seems entirely comfortable with the Clapton songs – ‘Mainline Florida’ and ‘Pretending’ are played with affection and finesse. And as for Page? We are teased with a ‘Tea For One’ intro which leads into an uber bluesy ‘I Can’t Quit You Baby’ – again, the light/shade dynamics are staggering. The main set finishes with a hard rocking, kitchen sink version of ‘How Many More Times’, complete with a snippet of Free’s ‘The Hunter’, another atmospheric, spine-tingling solo and a frankly jaw-dropping drum solo from Anton Fig which backs up Joes claim that he is “pound for pound, the best drummer in the world”.

Indeed, Bonamassa is a chatty, amusing and endearing host throughout. At one point, as he straps on a Gibson 335, he tells us that it’s exactly the same vintage as the one used by Clapton for Cream’s 1968 farewell concert…a concert the young Master B watched on a Blockbuster video cassette rented by his Father. But mostly what he did was stand on that stage under a huge bank of lights and absolutely play his arse off for two straight hours. Even more so than his other tribute gigs, tonight was a guitar-fest and I can honestly say that I’ve never heard him play better. He is virtually peerless. Yes, his albums are good but seeing and hearing him wail away in the flesh is another thing entirely.

However, mention must be made of one factor that often gets overlooked amidst the six string pyrothechnics…his voice. As he nears 40 it has gained a touch more gravel and depth and, well, age. And like a fine whiskey, that’s a key ingredient. Actually, it’s vital for a bluesman – you’ve gotta have lived! Think about it, he’s covering Clapton, Rod Stewart and Robert Plant on this tour and he pulls it off with ease and class. There’s a genuine gravitas there now, you’re listening to the real thing – he was assured, relaxed, confident, authentic and cool.

And, after a flawless, career-best reading of ‘Sloe Gin’, it’s all over. Bonamassa and his A-list band (keyboardist Reese Wynans was in Double Trouble ferchrissakes, these dudes don’t lend their chops to just anyone) take a bow and wander off. For me, tonight was a high water mark for Bonamassa, his playing and singing are at an all-time high, it’ll be interesting to see what his next move is. You get the feeling that these shows were something that he needed to get out of his system. A doff of the hat, the acceptance of a torch passed down, a meeting of peers. “If these guys hadn’t have existed, I dunno”, he pondered at one point, “I’d have probably taken up tennis”. Thank fuck he didn’t. 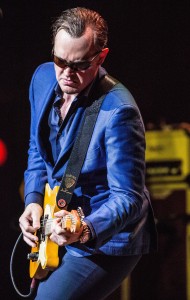 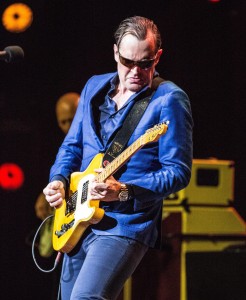