Left-handed acoustic guitarist Jon Allen ambles out on stage and offers us some half dozen self-penned numbers. There’s a certain unexpected calypso feel to some, soft rock others, easy-sided blues others. All pitch widely towards the mould established by the populist styles of Taylor, Simon et all back in the 70s, tip their hat to the metrosexualization of the new millennium but – on the evidence offered tonight – but to one side of the over-sharing branding tendencies of today’s pop market. He namedrops past passing involvement with Mark Knopfler, and for those who who’ve enjoyed his set, that there’s a back catalogue of five records.

His voice is a mellow rasp, the lines easily understood and appreciated (in part due to his diction, in part the town hall’s natural acoustics), on guitar he mainly plays chords. Notable tracks include ‘Bad Penny’, ‘I Hope You’re Happy Now’, whose themes express themselves in their titles, and the amusing spendthrift shopping tale of ‘Dead Man’s Suit’ whereupon he also donned a shoulder-braced harmonica and got the crowd to clap along. Indeed there’s much appreciative applause for his comfortable warm-up prior to the main event. 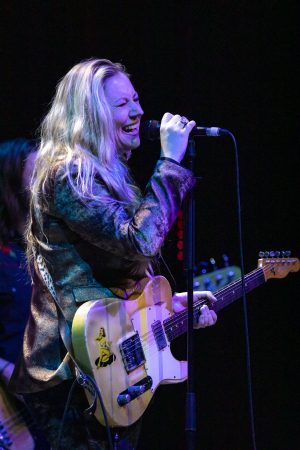 Some twenty minutes later, save for bass player Steve Lehane, this is a totally different line-up to the band who played with Joanne Shaw Taylor in Coventry, back in April. To a man they’re all dark haired and sporting facial hair of varying lengths, and her keyboard player’s got dreadlocks that nearly touch the floor. Ms Taylor walks on last, time away on US shores having not seen her eradicate a Midlands-borne accent. “Good evening, Birmingham, how’re yer doing?” she elicits but there’s no time for reply her guitar wails out and they’re straight into ‘Stop Messin’ Round’. It’s a hefty rock-bumping start, and following an organ solo she moves stage right, there to perch on the edge as she solos, her favourite position to do so this evening as we’ll find out, with less stomping about on stage but some careful consideration towards her actual guitar playing tonight.

‘I Want You To Love Me’ follows with a syncopated groove before the beat picks up a step, solos trickle out featuring pinched notes that add intensity. Past credentials established, she now entreats us to the first of several tracks from her new album, beginning with title track ‘Nobody’s Fool’ – Her suited second guitarist adds guitar licks, a piano tinkles teasingly throughout and between the cruising soft rock boogie of the number, we inevitably get another guitar solo, not that we’re complaining, though there’s no need to greet and ask us how we are so often, though you suspect this to be something of an attempt to overcome shyness, something that’s banished to the stage wings once she start playing. She gets us to give another round of applause to Jon Alllen, then relates how “wonderful it is to be back in Birmingham”, discussing the German Christmas market and how her niece and nephew are here with their parents (the row in front of me two seats along actually) and seeing her perform live for the first time ever. As such, they hopefully admire her heartfelt vocals on slow ballad ‘If You Gotta Make A Fool Of Somebody’ that follows next, and as for solos we get two, the latter featuring a healthy dose of vibrato as he works both the length of her guitar’s fretboard and the stage itself interacting with band members. 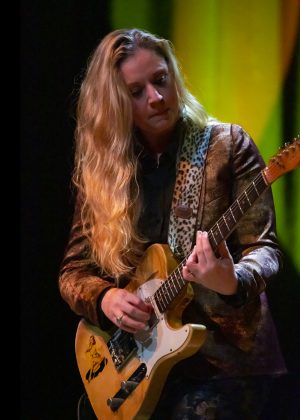 Drums set up the beat, steering us into some steady-riffed freaked-out blues, the emotional trigger continuing to be cocked and loaded lyrically as she covers Albert King’s ‘Can’t you See What You’re Doing To Me’ with her playing drenched in Kossoff like outpourings  – However, her actual playing style looks and sounds to be a little different tonight, there are little mannerisms noted from the way she’ll infrequently fret over the board with her right hand alongside playing notes with her left, more natural harmonics in evidence, and actual differing choices of phraseology, unexpected ones.

Taylor tells us she’s about to play another track from last year’s Blues album, with The Fabulous Thunderbirds ‘Two Time My Lovin’’, then much as she loves the actual song not to put up with such antic in real life, having told her sibling’s children to cover their ears as she swears.  It’s a fun-time shuffle rendition with the whole band coming in on vocals during the chorus, while the guitar lead work itself proves lyrical in approach.

There’s more of a country blues arrangement feel to tonight’s rendition of ‘Let Me Down Easy’, her second guitarist, Joe we believe, lays down broken chords over which Taylor’s voice emotes gracefully – Not unlike Christine McVie my scribbled notes read somewhat ominously as texts later in the night will inform us of her sad passing. A trickle of trebly notes issue out, their frequency increasing until they rain down furiously, the song morphing into the piano-led 12 bar boogie of ‘Three Time Loser’ the paces increases and the guitar solos become Stateside blues styled. ‘Dyin’ To Know’ opens with country picking veering into a fiery rage the way Rory Gallagher used to becoming something of an epic, then with a change of guitar there’s spaghetti western menace with 50s-styled baritone guitar licks and percussive chimes for ‘Bad Blood’.

Continuing with tracks from the more old-school pop-flavoured Nobody’s Fool album we get one of the tracks I was hoping she would play, the most delicious and infectious, sweet and hook laden ‘Won’t Be Fooled Again’, that I note for those six-string warriors out there she uses a capo around second fret on her telecaster for. While those of us simply besotted by the song may be interested that the female backing vocals on the studio version here being replaced by male harmony ones as Greek chorus are performed in brotherly protection to the wounds Taylor expresses herself. I have a notebook filled with four pages of gushing notes on this one, but you get the drift, and I can decipher what I scribble in the dark anyhow. 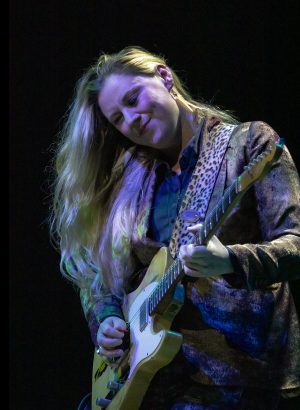 ‘Watch ‘Em Burn’ proves a guitar workout and a half, encompassing assorted styles of playing, large musical asides fast, slow, powerful and as tender as can be just like all those late 60s-early 70s guitar god live sides of vinyl a good proportion of this audience hold onto like holy grails. That this late in the night her drummer, a big beefy fellow, still has the power to suddenly throw some extra weight behind the number later in the proceedings pretty impressive too. The guitar heroics continue but in a different vein with ‘I’ve Been Loving You Too Long’, a big gospel ballad that takes on a bolero approach in its instrumental outreach section.

Drums shuffle, bass sets the tempo bopping into playful melody and funky chords more Hendrix influenced rather than Niles Rogers despite this being another big chunk of pop hooks with ‘Just Another Word’. With organ wrapping us in a warm blanket of sound on this cold evening, there are creative melodies aplenty on guitar, and deep resonant backing harmonies. The chilled loving vibes continue with her strapping on an acoustic, relating how her mother passed away some ten years ago her finding she still thinks of her whenever she needs advice and we’re played another new album track in ‘Fade Away’, featuring some very pretty piano along the way.

Armed with white telecaster once more, and the return of the rhythm section who’d left the stage during the previous number, we get yet another sensually infectious new number in ‘Runaway’ that becomes increasingly like some lost late 80s Snuffy Walden TV theme each time I hear it. Live it may be a heavier take but that’s not a problem, though the gorgeously trippy guitar solo needn’t have ended so soon.

Band introductions are made, but typically I can’t hear them clearly, thus possibly Joe was on guitar, Eric on drums, another Joe or Jez on keyboards and definitely Steve on bass. Either way, talented guys. She also lists old venues like the Adam & Eve and Fiddle & Bone where she started off playing, thanking those who’ve been supportive of her career. But now, as organ rears into life, the breaks are off and we get steamy blues rock with some hearty AOR moments with ‘Bad Love’ – Folk are singing along, the music wild, wiry but oh so tight; Taylor solos the overall effect undulating with sound, her organist reciprocates and together they race towards an epic finish line that’s bold, powerful and heart-pounding. The audience beside me agree all standing to applaud as the band exit stage right.

Returning to encore, Taylor expresses how pleased she is to be able to get out and play live after covid’s worldwide shake-up, and thanks everyone for their support tonight.  Finger picked notes increase in intensity, her voice dusky and deep, the rhythm kicking in for ‘Going Home’ – It’s not so much a Southern rock rendition as a tour of the south’s assorted musical influences, with some spiky Texan blues standing up to be counted with plenty of left-hand hammer-ons and ragged squeals of delight on guitar. As if anyone needed reminding of who the lady is, Joanne Shaw Taylor sends the crowd home with The Dirty Truth’s ‘Mud, Honey’, unrepentantly heavy-riffed for most of its duration, its brief more reflective section but a boxer’s feign before a knockout crescendo is reached.