Joanna Connor is a graduate of the Sister Rosetta Tharp school of the blues. Electric, bristling with attitude, amp-punishingly loud and ready to rumble, and with her latest release ‘4801 South Indiana Avenue’ that, dear reader, is what you get. Mississippi acoustic blues is all well and good buddy but now, now we’re in Chicago and, to misquote David Mamet, this is the Chicago way.

Connor has been plying her slide guitar for quite a while now. Starting on the brilliant Blind Pig record label, she has recorded an impressive…well, I’ve lost count of the number of albums she’s recorded but it’s a lot. This, however, could be the one that finally propels her into the public eye. ‘4801…’ is her first album for Joe Bonamassa’s KTBA record label and it sees Bonamassa and Josh Smith handling production duties as well as contributing guitar and backing vocals throughout. To get that authentic Chicago feel Bonamassa insisted on a effects pedal ban and brought his enviable collection of vintage guitars and amps to the sessions.

So, yeah, to JB’s credit he has gone all out to capture that earthy, electric, direct urban Chicago feel – there’s no polished commerciality here. Songs were recorded live with a 3-take maximum. It’s well produced, make no mistake, Bonamassa has proved himself to be a fine producer of late, but this album is as raw as all fuck (and praise be to the ghost of John Lee Hooker for that).

What we get is blues. Loud, guitar based blues – with added stellar keyboards, courtesy of Bonamassa (and Stevie Ray Vaughan) sideman Reese Wynans. And that’s pretty much it. There’s boogie, there’s 12 bar blues, and there’s a dash of BB King. But when it’s done this well what else do you need?

Things get off to a suitably monolithic start. The drums are appropriately basic, coming, as they do, from the Mo Tucker school of rhythm. There are large concrete slabs of blues being laid down, topped by nasty, scratchy Elmore James solos. Musicians have to be very good indeed to play with this thrilling lack of sophistication.

A bell tolls on the intro to ‘Bad News’, heralding 6 and a half minutes of prime ‘feel bad’ blues. Connors guitar howls and weeps and her vocals are gritty and world worn – there’s depth and experience here, a life lived. Again, credit goes to Mr. Bonamassa who apparently worked hard with Connor on her vocal performance throughout, pushing her further than she’d gone in the pas

A horn section then appears for a couple of songs and this is where the BB effect is most keenly felt. ‘For The Love Of A Man’ shakes it’s tailfeather while Connor’s slide shimmies seductively around the band. These tracks have a totally authentic retro feel, sounding like a pair of long lost deep cuts, played on scratchy vinyl.

And then it’s time to roadhouse again. The grooves return. Several tracks sound like extended jams rather than actual songs but then a lot of the best blues did. There are some big ole’ hunks of brute minimalism on display here. Songs drop out to a whisper and then roar back, accelerating to their finish lines. It sounds like all concerned were having a ball, finesse has been flung casually out of the window, sacrificed at the altar of foundation-rattling boogie.

We end with the slight curveball of ‘It’s My Time’. We hear background chatter, a caveman beat until Connor’s voice literally rises above the din to give us a moody spoken word affirmation. Her slide guitar slices through the atmosphere, dangerous and diamond-sharp. “I’m not doing this for fortune or fame, I just want people to remember my name”. With this album, I think they just might. It may indeed be Connor’s time – we’re not quite in March yet and already we have a contender for blues album of the year.

This is street corner fare. It lives on Maxwell Street, scrapping for it’s dues like the hoodrat it is. It also gives Bonamassa the opportunity to play the kind of no-frills blues he rarely gets a chance to go near – you get the feeling he’s enjoying his holiday on the bad side of town. But let’s not take anything away from Joanna Connor – this is her album, she’s all over this. Her guitar roars above the fray and her vocals have never been better. It’s the classiest, nastiest slab of ground zero blues you’re likely to hear this year.

Joanna Connor’s album “4801 South Indiana Avenue” is released by KTBA Records and can be ordered from www.jbonamassa.com/albums/2021/joannaconnor/4801

Released on 26 February 2021 on KTBA Records 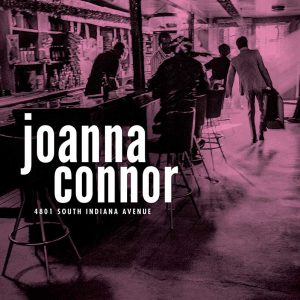