I’m sitting halfway up the NEC watching a middle-aged Jeff Beck racing round the stage with his guitar swung over his head like a whippersnapper one minute, then standing still under a spotlight making his six-string cry out in sorrowful torment the next. She-who-must-obeyed is not pleased. His recent Flash album has impressed her, and she’s come here to see the Yank who sings on the album, not a guitar god. Many years later, Hall will indeed play live with Beck, but only in the USA. His homeland is where he’s made his bones, this here Mr. Jimmy Hall.

Singer, harmonica and saxophonist with Wet Willie, a laid back and funky Southern rock band who scored chart hits over the Atlantic with singles like ‘Keep On Smilin’, Hall has also had a solo career and this latest release has him appearing with Joe Bonamassa in a co-producer role, under the guitarist’s KBTA record label.

With a big fun-time drumbeat leading the way, and a loan of the guitar riff to ‘Milk Cow Blues’ Jimmy Hall delivers a first-person narrative to a certain someone who’s walked into his life and caused him to be ‘Jumpin’ For Joy’ on the album’s opening number. Dipped in some Cajun pepper with the salty breeze of New Orleans in the air, this is a light-hearted bop of a number, wherein Hall’s lips blow out a harmonica solo and Joe Bonamassa take a few bars for himself.

Things get a little more serious, while slowing the groove down for the early evening funk of ‘Risin’ Up’; guitars blowing sassy and free, Hall’s voice echoing with manly soul, preaching how he’s “going down to the river’s edge”, aided and ably abetted by female backing.

Dedicated to lifelong friend Greg Allman, ‘Dream Release’ is a curious yet strident beast. Musically veering between some Wrecking Crew styled horn-rimmed ballad and Derek & The Dominoes chord chopping, at times it’s easy listening music with the odd jingle-jangle affair and takes a few listens to appreciate. The lyrics are what draw you in, talking fondly of times gone by and how such bonds remain with his voice veering between a gentle croon and wide-arched bellow.

Featuring Josh Smith on some mean guitar for ‘Girl’s Got Sugar,’ AC/DC fans might raise an eyebrow to its similarities with ‘Girl’s got Rhythm’ but delivered with more than a handful of bold and brassy boogie here. Reese Wynans delivers some fine piano and there’s a pretty neat hook line with every double entendre or thoughtful observation Hall delivers vocally.

Title track ‘Ready Now’ features Warren Haynes and is an empowered Southern rock anthem, singing of past misdeeds and redemption found. Caressing country, blues, rock and gospel during the number, Haynes’ slide work soars in reflective harmony alongside Hall’s rich voice, ensuring it’s something of a centre piece for the album. That’s if it were not for ‘Holding On For Dear Love’ that sees us in the bosom of the soul-fuelled funk Wet Willie delivered so well. The female harmony chorus vocals an excellent decision to add on this one, while Bonamassa steps out of his comfort zone stylistically for a brief, but most tasty, solo.

The slow blues of ‘A Long Goodbye’ may be more Bonamassa’s modus operandi but it’s the warmth delivery of this break-up number that really sets the emotions running. Downbeat honking blues follows with ‘Will You Still Be Here’, there are some crazy guitar lines whizzing round as is a sweetly blown chirping harmonica, but none grandstand in the way of Hall delivering some fine lines sung with proud but gentle emotive force. This is old school, baked well.

Acoustic guitars picks out the melody for ‘Without Your Love’ another effortlessly sung impassioned number, that tips its hat to country rock with a little AOR in its catchy but subtle dramatics. Jared James Nichols guests on the brief but fitting guitar solo for this one.

Percussion stirs up an offbeat rhythm, organ a little ska-like, Hall’s voice sounds a little like the late BB. King on this one, not least when he hums out a “hmmm” with backing vocals coming on like The Staple Singers. Had The Wailers been brought up by the bayou instead of residing in Trench town, they may well have sounded like ‘Love For It’.

From the opening bars you know ‘Eyes In The Back Of Your Head’ is going to be a little bit special. A little echo on his voice, Hall recites a moral tale, noting: “This whole world is mean as a snake, boy” A gently picked acoustic, some haunting harmonica and a lonesome but full-on voice is all this needs to be a nigh-on perfect coda to Ready Now.

Jimmy Hall’s is a voice that rarely goes for the jugular. It’s relaxed and confident, and on this album willing to tell you about life’s experiences – or possibly ones made up if they spin a good yarn – and share a moral or two without the need for preaching.

The album itself is laid back, rarely profound but often worldly wise in its lyrics; sit back, appreciate the mellow soothing power of Jimmy Hall’s voice, listen to good times of the supporting music, pour yourself a stiff drink, and smile. Stirred never shaken, sometimes the world isn’t so bad. 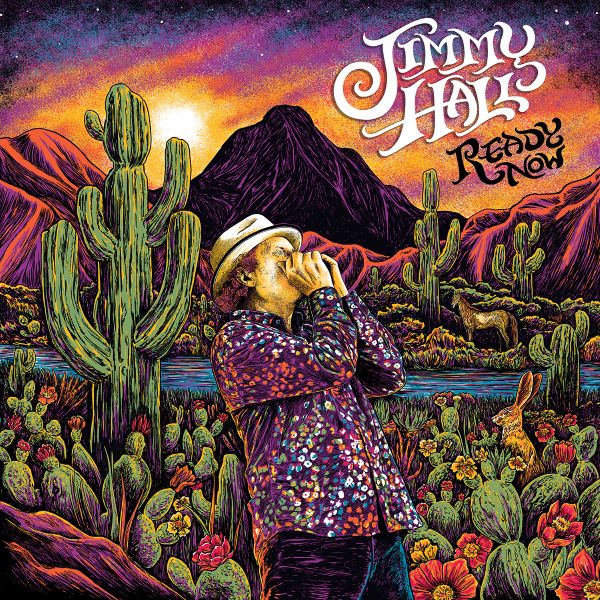