One down, Two to go…

Reviewed by Brian McGowan and ressued by, yes, you guessed it, Rock Candy Records, in August 2017.

For all its face value rebellion, Eighties’ LA Glam/Sleaze Rock had its own strict conventions and a uniformity of sound that defined the genre. If your music fell outside the envelope, you’d find your band enjoying only a minority interest.

Jetboy operated in that Sunset Strip netherworld. Their sound, much of it an unlikely marriage of jangling seventies hard rock and shouty punk, often in collision with a Stonesy shuffle, attracted a devoted fanbase. Eventually it also attracted the right A&R men and they signed to Elektra, later moving to MCA before the launch of the debut.

But Feel The Shake was damned from the moment it was released simply because the band’s sound cut across too many musical boundaries. It couldn’t be pinned down, categorised, pigeonholed. Critics don’t like that, and often, neither does the record buying public. 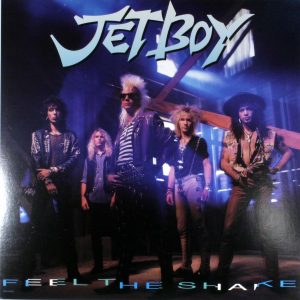