Given this is a reissue from 1987, it would be easy to refer to Jeff Paris in the past tense. But his talent and resilience have endured… more later. Paris is a multi-instrumentalist and a prolific songwriter, whose first taste of success came with the material he had been writing for R&B artists such as Tower Of Power and Jeffrey Osborne. He was later to experience a Damascene moment reading a magazine piece, centred on Steve (Apple) Wozniak’s 1985 US Festival. The review revealed that the AOR content of this outdoor festival accounted for 2 of the weekend’s 3 day duration, such was the growing popularity of the genre. It was a truly dramatic transformation. Paris sharpened his song writing pen and shaped it in the image of Melodic Hard Rock, eventually, if not immediately crafting some of the key songs of the decade.

His first two albums rose without trace. Race To Paradise (1985) stiffed, despite some isolated oases of critical acclaim. Wired Up (1987), again assiduously avoided commercial success, but came to define his musical direction, and even if there weren’t any real surprises, the recording retains the awkward, jubilant AOR sparkle of the debut, combined with the classic song structures of his earlier work. Producer, Tony (AC/DC/Cheap Trick/Motorhead) Platt gets the album off to a fiery start on ‘Saturday Nite’, adopting the brash, heavily accessorised swagger that characterised the eighties.

Paris was never the most willing of frontmen, though you could never tell from Wired Up, His performance usually resisted Platt’s musical incitement to bombast, but Bob (Aerosmith/ Crue/ Buble) Rock’s hard’n’heavy mix often saw Paris’s voice swell and soar into an impassioned cry from the heart, as on ‘Trial By Fire’ and ‘Charmed Life’. There’s a lot to like here. Paris and bands like Alias and Drive She Said often jockeyed for position in AOR’s equivalent of the Football League Championship, aiming for that elusive breakthrough into the Premier League. A few hit singles aside, it never happened.

But even now, you can feel the heat emanating from Paris’s burning ambition and blazing talent. The sheer class of a great songwriter and performer comes shining through. The remastering helps greatly, bringing depth and clarity to the lurching keyboard punch of ‘I Can’t Let It Go’ and excising the baggage from ‘Cryin’, leaving behind a taut, wiry rock anthem, a zeitgeist-capturing precursor to ‘Lucky This Time’, the hit he was later to write for Mr Big. A year on, fledgling all girl rock band, Vixen, picked up 3 songs from Wired Up for their self-titled debut. Their cover of ‘Cryin’ gave them Billboard Top Forty exposure, and with it, gave Paris the recognition he deserved. 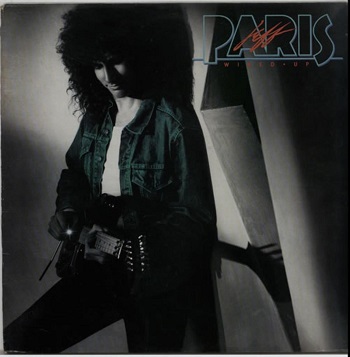 p.s. nowadays, Paris writes and performs with Delta Blues artist, Keb Mo’, and does a bit of ‘song whispering’ on the side.