Recorded last year at the iconic Hollywood Bowl, this straightforwardly shot release captures the magical evening when Jeff Beck, aided and abetted by assorted guests, convened to celebrate 50 years of making music. Always a lone gunslinger, flitting from project to project, genre to collaborator, Beck’s career has always felt a little disjointed, lacking the band cohesion of Page or the continuity of style of Clapton.

Which here allows Beck to present an (almost) chronological overview of his back pages, bringing on bandmates past and present to help him tell his story. Vocalist Jimmy Hall (of Wet Willie… no sniggering at the back) steps up to lead us through a batch of faithful, succinct Yardbirds hits, Beck playing with an easy, casual fire. From there we’re into The Jeff Beck Group – ‘Beck’s Bolero’ is stunning, its namesake beginning to warm up. Indeed, he sends quite extraordinary sounds spiralling up and around the Bowl – and guitar fanatics take note here – all on the one guitar. Beck, more than any other guitarist, plays the GUITAR – not the pedals! No trickery, it’s all done with his fingers, the tone and volume buttons and the whammy bar.

But it’s with the appearance of Jan Hammer (he of The Mahavishnu Orchestra and ‘Miami Vice’ theme fame) that the evening really takes off. They roar and wail through a powerhouse mini set of jazz rock fusion culled from his ‘Blow By Blow’ and ‘Wired’ albums. As great as his band is, he now has an equally brilliant foil to bounce off. They’re clearly having a ball, pushing each other skyward. They’re virtually ignoring everyone else on the stage, beaming, playing to each other, egging each other on to ever more audacious highwire acts – it’s a thrilling 5 song blast breathtaking musicianship.

Off goes Jan and on comes the blues. Jeff is joined by Beth Hart for a husky, soulful, ‘I’d Rather Go Blind’, and Buddy Guy for the 6-string summit that is ‘Let Me Love You’ – Buddy quickly realising he won’t be able to blow Beck off the stage as he did with The Stones in ‘Shine A Light’, so he switches tactics, opting instead to relax and enjoy trading solos. Musical soulmate Billy F. Gibbons steps up next for a raw, cool groove through ZZ Top’s ‘Rough Boy’.

Steven Tyler bounds, spins and swirls onstage for a wild, turbo-charged ‘Train Kept’ A-Rollin’ and then we’re into a brace of killer covers – Beck’s now standard, guitar shred, firework display, all singin’, all dancin’, bells and whistles (and feedback) take on The Beatles ‘Day In The Life’, and a final, powerful, bittersweet version of ‘Purple Rain’, for which everyone comes back onstage for the big finish, Beck bringing the song home with an outstanding solo.

This is a blast. Great set list, great guests, great atmosphere and a frankly jaw-dropping display from arguably our finest, most unconventional and ever dazzling guitarist. And no ‘Hi Ho Silver Lining’! 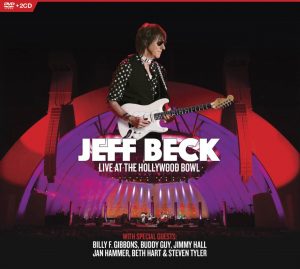