Jean Beauvoir‘s history – success with punk rock pioneers, the Plasmatics, and further success as producer of The Ramones – didn’t lend itself easily to Melodic Rock. Big surprise then in 1993, when he formed Crown Of Thorns with friend Mikki (Shalamar) Free, and released the self titled debut. It created huge interest among aficionados, and led to a string of album releases over the next 15 years, none of which really matched up.

The bulk of this raft of remasters comes from the COT debut, and adds a handful of snapshots from previous lives – solo stuff used on movie soundtracks, and some proto COT material from his prior rock band, Voodoo X.

Sadly, no place for the magnificent ‘Are You Ready’, but four tracks that formed the nucleus of the debut are here: the Kiss/funk of ‘Hike It Up’, the wiry, metallised ‘Secret Jesus’ and ‘Standing on the Corner For Ya’ . . . it’s given a dreamy, hypnotic feel on this re-recorded version, created by the addition of the sweet, softly swaying sound of a gospel choir.

The fourth, ‘Dying For Love’ is the jewel in the…er, crown. A tantalising, tentative guitar and keyboard intro seems incongruous in the album’s melodic hard rock setting, but when it suddenly spirals up into a propulsive riff, the result is hair-raising, and the song lifts off. Superb.

Looking back, those glimpses of the past . . . ‘Feel The Heat’ from Beauvoir’s solo album Drums Along The Mohawk (1986) and the trio of tracks, ‘The Awakening’, ‘Winterland’ and ‘Voodoo Queen’, from Voodoo X’s 1989 album, were clear signposts. Beauvoir was shifting his musical weight onto AOR ground, cultivating it with funky grooves and metallised riffs. As it turned out, the direction of travel was obvious.

For anyone whose interest has been piqued, the music of Jean Beauvoir starts here. 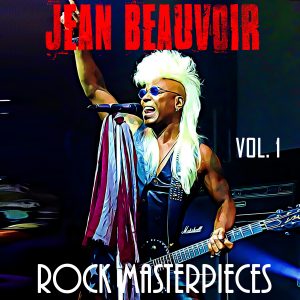