On stage a mean looking four-piece with shaggy manes peeking down from the sides of long brimmed hats look like they’ve just walked off the set of an apocalyptic western while singing that “Love don’t come ‘round here no more”. No kidding.  The music on stage is deep, focussed and bleeding with a Southern Gothic rock bent and The Robin’s invested in a backdrop screen featuring computer-generated animated imagery on a loop that works in effective juxtaposition.

Next song up ‘Testify’ is more riff based, to be followed by a new single, ‘Shine On’. It’s at this point, with the guy at the mic  talking that I realise this isn’t some previously unannounced act flown in from deepest Louisiana but British, and as a quick search round the internet will later discover are from nearby Derby.

They’re good, but if they announced who they were it must’ve been before I walked in. Maybe they’ve brought fans with them, there’s a healthy crowd and they applaud appreciatively. Trekking over to the merchandise stand later I find out they’re called These Wicked Rivers. It suits them to a tee and they’re worth checking out further.

They’re also more varied than one might expect, the frontman pouring out an organ-like effect as he strums chords on his guitar, in some dark gospel mood that all becomes strangely seductive as the rest of the band weave themselves into the mix enveloping a smorgasbord of sound, then briefly include a few lines from Neil Young’s ‘Hey Hey, My My’ before ending with a wail of screaming guitars.

But a short while longer a drum roll draws our attention to another squealing guitar and a back-bone bending ‘Mr Big Shot’ as Collateral proceed to work the stage. Yes, they all look like a lot of us think we did some 20 years or more back but they’re living the dream today, and their task tonight will be in winning over a Black Country crowd that’s seen it, done it and worn out the t-shirt. This is all before singer Angelo Tristan takes the stage, a cross between Freddie Mercury and Dave Lee Roth, or Justin Hawkins if you will.

He calls on the gathering before him to raise their hands. The response is one of “impress me” and few respond. Ignoring this they’re straight into ‘Promiseland’, harmony vocals warming the sides of a chugging riff before falling aside to let a fine guitar solo rip through.

Announcing that their self-titled debut album’s just hit the top 100 rock chart, Tristan straps on an acoustic and declares they’re about to play their last single, ‘Merry Go Round’. Whether it’s because they recognise the song, or they’re more secure in themselves that the singer won’t be jogging round the stage, the audience visibly becomes slightly more animated. The song comes across well, so too further pyrotechnics from lead guitarist Todd Winger.

‘Going With The Wind’ is next, more Americana but the drums beat down hard even as the vocals pitch higher. Collateral are playing a set-list pretty similar to one I caught them live with a year back, except a little tighter with assured confidence the right side of not being over-cocky. 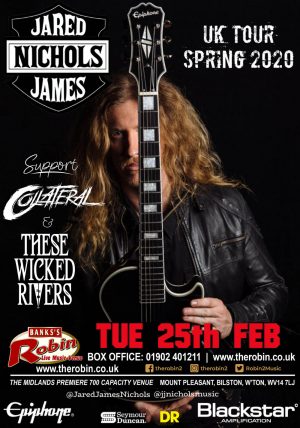 By now they’re all working the stage and deliver ‘I Did It For Love’. A little too late for the MTV viewers who’d have lapped it up in times gone by, but the performance here now has the crowd’s attention. ‘Midnight Cowboy’ even more so, and from this vantage point my eyes are diverted from the stage towards the rears of dancing females (momentarily only, obviously). If this was the weekend, they’d be line dancing down the length of The Robin. By the end of the number, hands previously dismissive are now raised in the air clapping along.

Having got their attention, Collateral leave them with something to remember as more guitar fireworks pile up and they surge with a Deep Purple style onslaught rush to end the night with ‘Lullaby’ – All “Whoah-whoa” war cry harmonies and an empowering lust-driven lead vocal before Tristan calls out “Are you with me out there?” “Yeah!” comes the reply and the kind of audience singalong you wouldn’t have bet your shirt on half hour ago ensues. The roar that sees them leave the stage ensures no such problems will ensue next time they play this way.

Dotted around the audience are members of Piston and Wolf Jaw (formerly The Bad Flowers) and more beer is bought at the bar, but as the Pat Travers Band’s ‘Snortin’ Whisky’ blasts out over the PA there’s a call to arms as we collectively unshed the years, and we remind ourselves why we wore our double denim and leather with pride. Up on stage our hoary memories manifest themselves into reality in the form of Jared James Nichols – A living breathing guitar hero styled in the old school manner.

A lion’s mane of hair swings free over a tattooed-biceped figure that tells you it works out and between it a smile that promises a good time. The Wisconsin-born Nichols straps on his guitar and says “Let’s rock and roll, baby!” Chugging power chords and screeching vocals follow for ‘Last Chance’ then it’s straight into the strutting riff of ‘Don’t Be Scared’ that moves at a faster pace than the recorded version.

Plectrum-free he strikes chords with the right hand of his thumb, fingers for single notes; pinched and sustained, with the occasional guitar lead whipped across the strings for effect. He works the stage; a foot on monitor to solo, a visit to amp to illicit feedback.

“Damn it’s good to be back!” he declares before he ploughs into the deep distorted blues rock of ‘End Of Time’. Nichols’ songs don’t outstay their welcome, but it’s true there’s a formula he can overplay one song after another live. However, tonight he introduces a new song called ‘You Threw Me To The Wolves’ and it shows his growth as a writer. Drums beat down, there’s a turnaround guitar motif with country picking flavour that builds momentum, pouring out into heavy melodic overdrive. Lyrically too, he’s distinct with his vocals here and the unfolding song-story draws you in. It moves into something with a mid-west Bad Co brogue to it, and a solo that begins with a variation on the vocal melody before returning home. Frankly, he could have played the song longer, extemporising even a little more. After all, if something’s good enough we have the attention span.

Striking a wild cave man pose centre stage his guitar wails through ‘Honey Forgive Me’ incorporating a slowed down heavy rock Jeff Beck style take on The Allman Brothers’ ‘Jessica’.  His left-hand proceeds to play over the top of the fretboard, then dips up, down and all around for effect as he launches into the distinctive boogie riff of ‘Baby Can You Feel It?’ Cue cowbell, some audience participation singing along, a change of pace musically and a good time had by all.

He may look like the guy old Ted Nugent dreams was staring back at him in the mirror, and there’s a guy been calling out for ‘Stranglehold’ all night, but this more Pat Travers style number elicits a warmer crowd reaction. He favours a power trio format like them too, the US version as pioneered by Blue Cheer and Grand Funk.

‘The Gun’ rocks out next, followed by more entertaining boogie with  ‘Now Or Never’, then Nicols informs us that Wolf Jaw will be supporting him on his European tour and introduces Tom Leighton from that band, who joins him on stage to play guitar and they proceed to perform a cover of Black Sabbath’s ‘N.I.B.’ Leighton tends not to move stage front and that’s a shame. Save for Nichols’ own flamboyant arena rock gestures, and the animated screen show still playing in the background, there’s very little visually going on stage, with drummer Dennis Holms stuck behind his kit and what looks to be the latest in a line of bass players looking cool but barely moving.

More doom and gloom follow this time with an American Gothic theme for ‘Nails In My Coffin’. Moments of quiet introspection against heavier onslaughts of guitar gives it a more epic feel, rather than just the verse/chorus/solo routine. The heavy blues of ‘Hardwired For Love’ is next concluding with an ever speeding guitar solo as his foot rests on the monitor building into great waves of noise as ‘Playin’ For Keeps’ shakes and thunders with its  own solo incorporates ‘Day Tripper’ and ‘The William Tell Overture’ before the rhythm section join in for ‘War Pigs’.

“We’ve got one more for ya!” he calls out, pumping his first in the air as Holms’ cowbell strikes out once more, the familiar tickety-tackety rhythm informing us that Nichols’ cover of Mountain’s ‘Mississippi Queen’ is going to be ringing in our heads all the way home. It bumps and grinds in all the right place, and the guitarist is keen to whip his guitar some more before launching into a lead break full of feedback. There’s a brief drum solo before power chords detonate and that’s it, save for a show photo and a “See ya later” for the meet and greet later.