So, that difficult second album syndrome. Someone, apparently, has forgotten to include Jared James Nichols in the memo, either that or he just doesn’t care. Any wobbles or worries have been swept aside and blasted away in a storm of dirty riffs and out-there solo’s.

There’s no prevarication. No overthinking. No concept albums or radical changes of direction. James and his band (Erik Sandim on bass and Dennis Holm on drums) have clearly just rolled into a room, plugged in and jammed. Loudly. And that’s the joy of this album – it’s heavy, loose, and as much fun as a Motley Crue aftershow party.

Indeed, 80’s hair rock is clearly a touchstone here, or at least the good aspects of it. Its sense of fun, enjoyment and unselfconscious desire to simply rock out. Opener, ‘Last Chance’ in particular, blasts off (after a brief Eddie Van Halen squiggle) and roars and wails like ‘Slave’ era Skid Row. And rock this most assuredly is, there’s nary a whiff of blues. But fear not, there will be.

A shade of indigo begins to swirl in around the Bon Jovi chantalong chorus of ‘The Gun’, courtesy of some seriously greasy slide guitar and an echoey, trippy finish. As far as this album goes, it’s an epic – one of only two songs to edge over the three minute mark.

And this may well be the album’s weak point – the songs, as much as they provide instant gratification – are a tad ill-formed. Jammed and committed instantly to tape. There’s a slight lack of complexity and polish. Riff follows solo follows riff…and that’s pretty much it. Several songs fade out, often a sign of no clear plan of how to actually finish the song, and to fade out a guitarist as good as Nichols in full flight is somewhat misguided.

However, that minor quibble aside, this album is a winner. Wild, heavy and carefree. Production duties are handled by Tony (son of Joe) Perry…and it shows. ‘Don’t Be Scared’, possibly the album’s heaviest moment, even boasts a talk-box riff amid the Alice In Chains brooding melody. We also get Stax style funk. laid back, gritty, southern rock and powerful Chicago blues shuffles.

Guitars and amps are pushed to their limits, distortion is always at the edge of the horizon. ‘Run’ grooves and shimmies soulfully like a very heavy Free while ‘Keep Your Light On Mama’ rocks it’s three loud chords in a very 70’s style – Mountain and Ted Nugent would have happily sold their souls for a riff this good.

Short. loose, fast, heavy and fun. Nichols album should see him roughhouse his way up the ranks of the current blues rock hierarchy and earn him a new legion of scruffy haired new fans. These songs will shine when they hit the road. 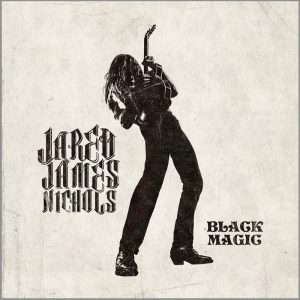