Formed in New York in 1984, the original incarnation of Jack Starr’s Burning Starr only lasted for five years, and if any band was born in the wrong era, it was surely this combo. Too hard (and talented) for the prevailing glam scene, yet too melodic for the thrashers, they were ill at ease in a decade that often valued style over substance. However, since their reformation in 2004, time has finally caught up with them and they’ve hit a rich vein of form. Latest album, Souls Of The Innocent, carries on the good work of previous studio outing and with new vocalist Alexx Panza at the hem, it seems the sky’s the limit.

Jack Starr’s Burning Starr have been in constant evolution (as all good bands should) and, while there’s been no radical change in sound, they’ve matured into a rather tasty power metal outfit. To symbolise this, introduction ‘The Ascension’, is suitably grandiose and sets things up nicely for opener ‘Demons Behind Me’. With a sublime riff that’ll snare you immediately, Burning Starr reel the listener in and, a fish with hook in mouth, you’ve no option but to resist to its pull. I’m definitely picking up a classic Helloween/Grave Digger vibe and ‘Demons Behind Me’ encapsulates all that’s good about ballsy metal, from the operatic vocals to the thunderous drums via the electrified guitars and chuggy bass, this track, as is the whole album, a celebration of metal, and you’re all invited to worship at the altar of Burning Starr.

Having played with some notable musicians in a long and illustrious career, you have to admire Jack Starr’s musical magnetism. He’s pulled some of the biggest names into his orbit, and while this could have resulted in a rampant ego, he’s level-headed enough to take his place within Burning Starr. This has allowed ex-Walpurgis Night and current Hitten singer Alexx Panza to make his mark, and he’s certainly put his stamp on the Heaven & Hell flavoured ‘I Am The Sinner’. A voice of several octaves, Alexx can get low down and bluesy (‘River Of Blood’) or flighty and angelic, as on the soaring title track. Former Pentagram bassist Ned Meloni and ex-Manowar drummer Kenny “Rhino” Earl make for a formidable rhythm section and they turn ‘Winds Of War’ into a swirling maelstrom. Of course, there’s plenty of fireworks from Mr Starr, but he seems content on making this album a collaborative effort.

Souls Of The Innocent is built for the long haul and, with no signs of flagging, the aptly titled ‘All Out War’ puts its foot firmly on the accelerator, and holds it there for four-and-a-half windswept minutes. Likewise, the penultimate ‘Where Eagles Fly’ has a frisky gallop (one that’d make Steve Harris proud) and it beats a steady path from speaker to speaker. The atmospheric ‘When Evil Calls’ ensures the album ends on a rather ominous tone; a snaking solo from Jack Starr is tethered by Meloni’s bassline while Rhino’s drums fall like sheeting rain. Over this, Alexx floats majestically, a falcon caught on the wind, his soaring vocals making for an evocative listen, and one that will haunt you long after the disc’s stopped spinning.

With plenty of miles under their belt, you could forgive Jack Starr’s Burning Starr for settling into the comfort of the “heritage” circuit. Yet, Souls Of The Innocent has a vitality which marks them as totally relevant and renders them leaders, not followers. 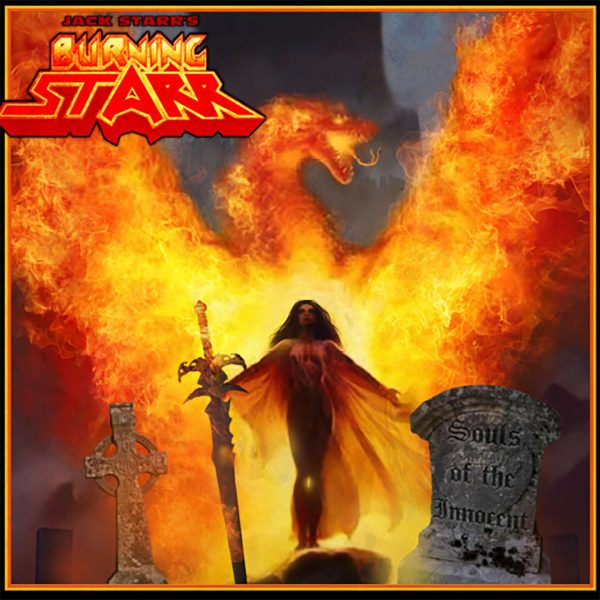