Having played on the first two (and best) Virgin Steele albums, guitarist Jack Steele’s legacy was always going to be secure. However, after leaving that band he formed the equally influential (and modestly titled) Jack Starr’s Burning Starr, releasing a series of albums that would go on to define the 1980s (and beyond). Collecting tracks from the most pivotal and important stages of Jack Starr’s career Eternal Starr: The Burning Starr Anthology is a compilation that honours one of metal’s greatest (but oft overlooked) guitarists.

Sometimes music is all about timing. An album will drop at just the right moment and define a generation, and Burning Starr’s debut full-length, Rock The American Way perfectly encapsulated the spirit of ‘85. A quartet of tracks from that record open this first disc, and ‘Fight The Thunder’ makes for a raucous introduction. Burning Starr deliver a sound that’s hard, yet accessible, and despite the screaming guitars and pounding drums, it remains catchy as hell. Originally released on an indie label (Passport) Rock The American Way was given a warm, luxurious production and along with the band’s melodic sensibility, placed them somewhere between Dokken and the Scorpions. The lyrics to songs such as ‘Heat Of The Night’ haven’t aged that well, but they were delivered with such conviction by Frank Vestry that they sound convincing, nonetheless. This was a solid start that found Jack Starr burning brightly.

When No Turning Back! hit the streets the following year, Burning Starr had undergone a radical change in personnel with only Jack remaining from the previous release. While some bands play it safe on their sophomore record, Burning Starr took a different route, and this is a much heavier affair. The four tracks presented here have a definite European feel, in a power metal/NWOBHM way, and feature plenty of frenetic fretwork fireworks from Jack Starr, and it’s easy to hear why the album got a glowing review from the metal bible, Kerrang!. More line-up changes accompanied Blaze Of Glory, but Jack was wise to hang onto vocalist Mike Tirelli and Blaze became one of 1987’s key releases. It pushes all the needles firmly into the red and continues in much the same vein as its predecessor, but finds the musical pendulum swinging back towards a more Americanised sound. Titles such as ‘Overdrive’ and ‘Stand Up And Fight’ give a good indication of the sound contained within, and if anyone asked you what was so great about ‘80s metal, I suggest you spin Blaze Of Glory.

Jack Starr’s Burning Starr were a constantly evolving beast, yet they always stayed true to their core metallic sound, and their eponymously titled fourth album found them moving in a slightly more commercial direction. The tolling cowbell, crystalline guitar solos and operatic vocals all scream “1989” (which, of course, is a good thing) and those with a penchant for the likes of Poison, Trixter and Warrant will find a spiritual home in tracks such as ‘Fool For Love’. Two years later Mike and Jack reconvened under the name Strider (presented here as The Strider Project) and got low down and dirty with some of the best blues/groove metal known to man. It flew defiantly in the face of grunge and alternative metal, which makes its charms all the sweeter. The four tracks here find Mike in fine voice, while Jack’s guitar has never sounded crisper and cleaner, and these songs will certainly whet your appetite and have you searching for the full album.

Fast forward a decade and Jack formed Guardians Of The Flame, a traditional metal outfit who took their name from the second Virgin Steele album. In many ways it found Jack returning to his roots yet upgrading his sound for the new millennium. The four tracks from Under A Savage Sky are the heaviest on this set (thus far) and the operatic opening ‘O Fortuna’ (from Carmina Burana) perfectly sets the scene. Aside from Jack Starr, the band featured ex-members of The Rods and Pentagram and, as you’d expect from such pedigree, the sound they produced veered towards the heavier side of metal, and tracks such as ‘Masters Of Fate’ could easily swing with Manowar. While many artists tend to mellow with age, Jack Starr has gone in the other direction, and the cuts from Under A Savage Sky still sound fresh and vital over two decades later.

2011 found Jack Starr releasing the excellent Land Of The Dead album, and by the time this opus rolled round, Todd Michael Hall had replaced Schmoulik Avigal on vocals (although this change occurred in 2003) and this constant injection of fresh blood seems to have constantly revitalised the band. The title track is evidence of this, and as soon as that opening riff kicks in, it’s time to grab your air guitar, ‘cos you know you are in for some good music. Continuing in the vein of Savage Sky, this album is much in the power metal style (with “power” being the optimum word) and each of the five songs contained here congeal into a musical steamroller that crushes all in their path. While it is true you can’t judge a book by a cover, the sleeve which housed Land Of The Dead, featuring a muscular dude with axe held aloft is pretty indicative of the sound contained with.

Three live tracks are culled from 2018’s Keep The Metal Burning…Live In Germany album, and they show why Burning Starr are such an intriguing live proposition with ‘The Flame That Never Dies’ licking at the listener’s ears, and ‘The Reaper’ further drawing comparisons of Manowar. “Bang your head and raise your fist/toast the spirit of ‘86” is sung by way of introduction to ‘Spirit of ‘86’ (the first of four unreleased bonus tracks), and never in the annals of heavy metal have truer words been uttered. This is metal, pure and unadulterated, and is played for no other reason that is sounds absolutely marvellous. A raw version of ‘Der Klang Der Liebe’ brings this collection full circle, and it’ll have you pressing ‘play’ at its conclusion.

37 tracks spanning over three decades, this anthology not only charts the rise and fall (and rise) of heavy metal, but one of the genres most inspirational and talented guitarists. A fitting tribute to the man and his music.

* Land Of The Dead

** Keep The Metal Burning…Live In Germany 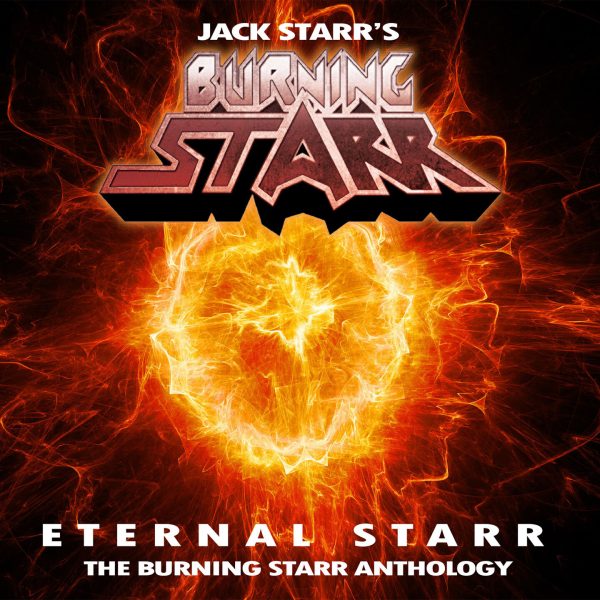