Following the release in 2008 of the reformed It Bites first album for almost 19 years, it took the band another 4 years to come up with their most ambitious project to date. The line up of original members John Beck (Keyboards) and Bob Dalton (Drums) along with John Mitchell (Arena/Lonely Robot/Kino) who had recorded The Tall Ships album with them and new recruit Lee Pomeroy (ELO/Archive/Steve Hackett) returned to the studio to record Map Of The Past a concept album inspired by old family photographs, some of which can be seen inside the cover of the album. It speaks of going back through your past and putting things right and covers the hazy world of nostalgia and seeing it rose tinted lenses.

Whereas on the previous album where the band had nurtured the It Bites sound in the writing process, here they gave Mitchell free rein to develop their style. Beck and Dalton were left to inject the band’s signature keyboard and drum sound within this framework and the results are stunning, especially on this John Mitchell remastered version where, instead of repressing the It Bites elements supplied by the pair, they seem to have been given more space to breathe. This is a concept, but not in the cinematic sense like Marillion’s Brave where a complete journey is told from start to finish, but more akin to Dark Side Of The Moon with a thread and themes which run throughout. This pulls together all of the best parts of the latest line up and presents It Bites to a new audience.

Scanning through the wartime radiogram, the listener eventually finds Beck’s lone accordion accompanying John Mitchell’s voice on ‘Man In The Photograph’ until Dalton’s marching drums join the fray to deepen the sound. Sooner than expected ‘Wallflower’ slams in with it’s orchestral keys and the chorus repeating the title. The lyrics tell the tale of a girl who is not all she seems to be and contains one of Beck’s top solos with a pounding drum accompaniment. The title track ‘Map Of The Past’ is as classic era It Bites as you will find here and is all keyboard and harmonies but with a kick of guitar solo at it’s midpoint and conclusion. After that duo the pace drops for ‘Clocks’ part lullaby part nursery rhyme with its funfair carousel and circular strings and its feeling of waiting and hoping in vain. Defending the flag but not quite knowing what you are fighting for is the question posed in ‘Flag’ and although the intro once again harks back to the earlier era it quickly ups the games with the dense multi layered sound. ‘Big Machine’ shows the direction Mitchell would go onto with his Lonely Robot project with massive choruses and heavy guitar riffs. Very mechanical and forward looking in comparison to the rest of the album along with its big chorus you get an even bigger solo from Beck followed by a rapturous solo from Mitchell.

Next we start a three song run which marks the heart of the concept. ‘Cartoon Graveyard’ was the lead single from the album and after the musical box intro it bounces along on the theme of being yourself and not following the crowd. You think that it ends on a church organ but it is in fact the introduction to ‘Send No Flowers’ which opens with full orchestral pomp leading to piano, voice and distant harmonies quite West End musical with the almost spoken lyrics and leading almost seamlessly into ‘Meadow And The Stream’ with a drop of Queen guitar and Tommy style mid section showing additional musical elements. The dreamscape lyrics tell tales of those we miss but heeds the age old warning of “be careful what you wish for…” before returning to the musical box from beginning of ‘Cartoon Graveyard’. ‘The Last Escape’ returns to piano and voice saying a farewell to those you need to leave behind and speaks of coming to terms with living with their memory.

Outro ‘Exit Song’ reprises the scanning radio this time finding a news broadcast overlaid by acoustic guitar to share just four lines before saying “Goodbye”. As with the previous The Tall Ships reissue we get two bonus tracks ‘Lighthouse’ was the B-side to the digital single ‘Cartoon Graveyard’ and ‘Come On’ was added to the original Japanese version of the album. Both are great quality songs but do not really fit the overall themes of the album so I think the listener should take them separately from the main album.

Once the band had toured the album the plan was to return to the studio to record another but with Mitchell’s heavy work schedule producing and writing for other bands so far that has not happened. John Mitchell did go even further down the concept route following Map Of The Past producing a trilogy of albums for his Lonely Robot project. Both Beck and Mitchell also went on to work with ex-Marillion vocalist Fish either in his live or studio bands over the last few years as well as in 2018 resurrecting Kino with Craig Blundell on drums to release the Radio Voltaire album. Whether It Bites ever return to the studio remains to be seen but with Map Of The Past they certainly reached a new but very different high point. The remastered album is available on either expanded CD or Vinyl depending on which takes your fancy. 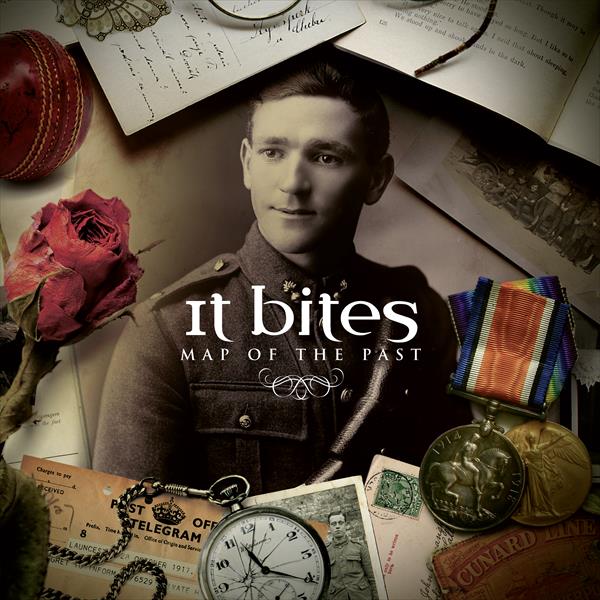