With more than a few releases from Iron Bonehead Productions reviewed previously, four more releases are being given the once-over.If you want to find out more about Iron Bonehead Productions, you can pay a visit to their website, take a listen over at their Soundcloud page, or get up-to-date info on their Facebook page. In the meantime, you can read the lot or click the band names below to go directly to their review:

Expect grimness and gruesomeness and maybe some grisliness too…

The nameless/faceless members of New Zealand’s Verberis bring their devastating death metal to us in swathes of reverberating destruction and plague-infested atmospherics. Opening with haunting chants, with ‘The Primordial Rift’ come the first barrage of down-tuned distorted riffs, cavernous vocals, and drum assaults with only the briefest of respites scattered across the foul miasmic landscapes. With ‘Sepulchural Slumber’ the mist thickens, the pollutants intensify, and the atmospherics deepen, a trait that continues into ‘Fangs of Pazuzu’ and ‘Kaliginous Ascent’, both of which match death metal savagery with disconcerting soundscapes. 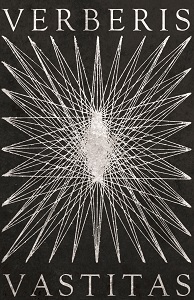 While the four tracks are intense, bear their own distinctive sound, and demonstrate a band capable of bashing out monstrous grooves as they are suffocating atmospheres, the murky production lets it down. Enveloped in – almost consumed by – such a dense and bottom-heavy sound means that a lot of the intricate details and nuances that Verberis have arduously carved into this very impressive debut are almost lost. But given the quality of the music on offer, Verberis are a band to keep an eye on.

Infernal Curse – The End Upon Us

Argentina’s Infernal Curse have been spewing their black/death barbaric bestiality into the world since 2008, and with two demos, two EPs, and a full-length in 2012, now they bring us another EP enticingly entitled The End Upon Us. And if this is anything to go by, those earlier works are more than worth digging up.

Opening with the title track, atop the chainsaw-rusted riffing and gut-grinding drums, Nocturnal’s vocals resound amid layers of echo and reverb to create a sound that is dense and demonic, the divebomb atmospherics of the frenzied lead guitar intensifying the viscous and vicious nature of the beast. And with both ‘Lascivious Malevolence’ and ‘Waters Of Phlegethon’ further fuelling the fire, the smoke from the abyss whence their chaotic and cutting wrath emanates thickens and consumes without discrimination or mercy. And while Peru’s Hadez are given the Infernal Curse treatment with a cover of ‘La Diosa Del Averno’ from their 1988 debut demo, this EP is good enough without it. The riffs, the musicianship, and the songwriting are all there but even though the reverb-drenched vocals that dominate over the music do this EP little favour, it’s still a monstrous piece of work. 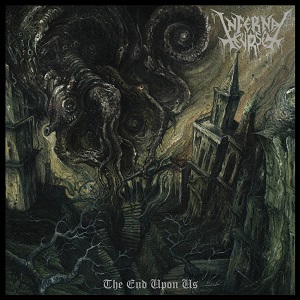 With a demo and a split with Sweden’s Inisans to their names already, drummer/bassist John Whiplash and vocalist/guitarist Gui Haunting’s death metal project Skelethal have delivered a mini LP entitled Deathmanicvs Revelation. Yep, the riffs are gruesome, the drums battering, the vocals rough and ragged, and the structures, though straightforward, have enough variety to keep them interesting. But as grim as it is old school, bearing distinct Swedish influences (early Entombed in particular), and like the title implies (with its obligatory ‘v’ instead of a ‘u’, of course), this is old school death metal worship by the numbers. A pretty fair introduction to the band that’s well-written and well-executed, Skelethal do an impressive job of maintaining the genre’s traditions but with more and more of this stuff appearing almost daily, this is another one for the pile. 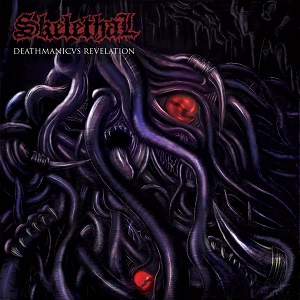 What to expect of a band with an EP called Penis Metal in its armoury? That Chile’s Hades Archer packs just five tracks into their eleven minutes of this split says it all. No gags, no gimmicks, this is raw black metal at its most unforgiving. Of the five tracks, while the seventy-eight-second ‘Portals’ is the most intense, with a simple yet savagely melodic riff repeated throughout, the barbarous vocals and the chaotic lead work flesh out this fetid corpse, it’s the one minute ‘The Ascension’ – the first thirty seconds a surge of filth and fury, the latter half a demonic voice – that perhaps captures the band at its most concise. Throbbing with depravity, filthy, deranged, and perverse, Circus of Abominations is all-too frequently one-dimensional to make it stand out as anything other than competent. 5 out 10

Also from Chile, a quick blast through Slaughtbbath’s back catalogue shows a band with an ear for unremitting brutality, a penchant for blast beats and trem-picked riffs, and a focus that needs little in the way of refinement. And with three tracks in thirteen minutes, Antichristos Thanatos gives that formula further reign. ‘The Grand Dialogue’ opens proceedings, its trem-picked and blast-beaten fury only temporarily yielding for the distorted bass to make its presence felt in a short, down-tempo respite before ferocity dominates and spills over into the malevolence of both ‘Mortal Paradigma’ and ‘Black Revelation Of Death’. Like Hades Archer’s half of this split, it’s brutal and ruthless throughout but the repetitive riffing can become tedious and the tracks occasionally blur into one. But with filthy yet clear production, the sharp musical and technical ability of Slaughtbbath is given enough presence to maintain the mystical aura of the band and its occult leanings. 7 out of 10 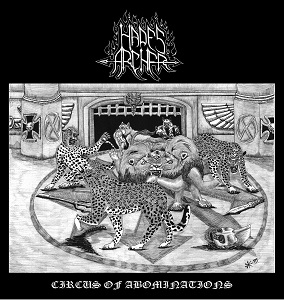 Side A: Hades Archer – Circus Of Abominations 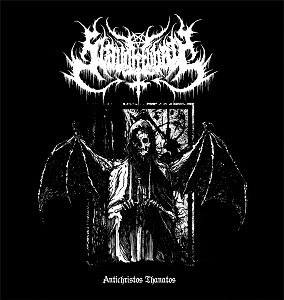 Side B: Slaughtbbath – Antichristos Thanatos