Iron Bonehead Productions is a favourite in these ‘ere pages (click here for a list of reviews) and so today we give a few more releases a damned good thrashing! Should you dare, you can read the lot or click the band names to go straight to their review:

If you want to find out more about Iron Bonehead, you can pay a visit to their website, take a listen over at their Soundcloud page, or get up-to-date info on their Facebook page.

With their debut EP Rún Af Inn Auðr appearing only a few months ago, Gnosis of the Witch have wasted no time in bringing more of their dark Thursian worship to the underworld with their second EP, Dauðr Burðr Þrysvar. With black metal bands delving deep into the occult and the mystical for their expression, it’s a challenge for any to distinguish themselves amongst the horde, regardless of the variation, the originality, or the uniqueness of whatever supernatural source they represent, but Gnosis of the Witch have delivered one hideously malformed monster of an EP that sets them far and wide from the hellion-honouring horde.

After almost four minutes of the eerie ambience of ‘Ek Bjóða Inn’ to warn us of the presence of those from the other side, the sounds of dark devotion enter. Bleeding black metal majesty through its born-of-fire riffs, devastating drums, and a harsh inhuman vocal, the unremitting aggression is compounded by synth sounds that subtly swirl through the mystical, almost psychedelic atmospherics that both enhance and deepen this harrowing experience. Pulling all kinds of fire down from the hellish sky above us, they cast us deep into the abyss whence their lords of darkness dwell for a harrowing and curiously cathartic experience. Thus we find ourselves in the heart of darkness where we are to remain until the band is done with us, then, and only then, will we be allowed to beg to be returned.

Cemetery Fog – Towards The Gates

First released in December 2013 and re-released through Iron Bonehead in March 2014, Cemetery Fog’s third demo Shadows from The Cemetery was nothing special (reviewed here) so suffice it to say I wasn’t expecting much from Towards The Gates. Press play and the reverb-drenched piano of the drearily-titled ‘Intro’ begins and this is close to being committed to the flames (well, switched off). But then ‘Withered Dreams Of Death’ stomps in with its size 9 doom metal boots and low-slung organ to smash those low expectations to smithereens.

As crushing as it is heavy and mournful, ‘Embrace Of The Darkness’ maintains the mini LP’s momentum, the track developing into an arpeggiated mid-section that flows into an impressively elaborate and atmospheric second half. The doom in full flow, the aptly-titled ‘Shadow Of Her Tomb’ is another impressive piece, yet as with the other two tracks is let down by a few passages that could have done with more work. And with a brief but good ‘Outro’ to close the journey towards the gates, it appears that Cemetery Fog have matured significantly these past eight or so months. As good as this is, their next release should be something really worth getting our filthy mitts on.

When you eventually make your way through the lo-fi-with-added-lo-fi production, what awaits you is a bunch of violent riffs, manic lead noises, almost-there-but-not-quite drums, clattering cymbals and rabidly barked vocals somehow slammed together into six tracks that reek of black metal bile. But even though it sounds sloppier than a gang bang in a pig sty, there’s an unfeasibly intense level of savagery at the heart of this bestial, blasphemous, and raw mini album. If you’re one of this that loves listening to Darkthrone on cassette on top of a mountain in winter, then this is right up yours. I dunno, maybe this defiance of “modern production standards” of which they boast sounds even better in those helmets… 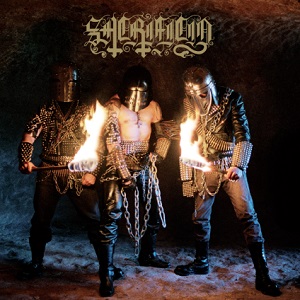