As Prog bills go, especially for venues the size of the Robin, this was a pretty attractive one, with one of IO Earth’s rare UK outings prior to their appearance at this year’s Cruise To the Edge, supported by the rather wonderful Solstice, who are always worth seeing.

There was a bit of a surprise when Solstice entered the stage as lead vocalist Emma Brown wasn’t among their numbers, instead we had Sian McGill lining up behind the mic. It’s not a permanent change, afterwards Andy Glass explained that Emma was away and Sian had stepped in for this and a few other gigs. As the opening song, ‘Morning Light’ unfolded, Sian’s voice gave the band a markedly different sound, being deeper, giving the band an almost Gothic element,  compared to Emma’s slightly more straightforward, rockier voice. Different, but still Solstice, with Andy Glass’ fluid and expressive guitar and the wonderful violin of Jenny Newman giving them their distinctive sound.

‘Morning Light’ was followed by ‘Keepers’, from the most recent album, as the band mixed  older songs, including some that hadn’t been played for a while, with newer material. There was a bit of a hiccup in the central acapella section of ‘Flight’, which we can put down to the limited rehearsal time with the new singer, but she was obviously finding her feet quickly, as seen by the superb job she did  on the opening sequence of ‘West Wind’.  ‘Cheyenne’, ‘Pathways’  and ‘Sacred Run’ finished the set, with the finishing song featuring some terrific violin playing, even by Jenny Newman’s high standards. The band don’t play live very often, which is a real shame, as they’re always enjoyable, always deliver some fine music and always create a good atmosphere when they’re on stage. 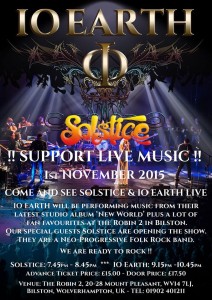 The general impression is that IO Earth don’t play that often in the UK either, mostly saving themselves for their annual gig in The Robin or for specials like their showcase at the Crescent Theatre in Birmingham last March. This gig partly acted as a warm up for their appearance at the forthcoming Cruise to the Edge, and also to continue the promotion of their recent New World album. There have been a couple of changes since I last had the chance to see the band, the first noticeable one being the addition of Jeff King on violin and guitar. Two rock bands with violins on the same bill must be something of a rarity, I would think. The violin gives the band an extra dimension to be sure, and adds to the impression that there is no limit to the band’s ambition and imagination. Both the opening numbers had an eastern influence, whether from the Middle East or the Russian steppes, which was interesting to hear, and vocalist Linda Odinsen seems to have a lot more to do in the band’s current repertoire, which can only be a good thing, as she’s a very accomplished singer and an equally effective stage presence.

Most of the set came from the new album, although there were very welcome dips into older material including the excellent ‘Smokey Wood’, a showcase for sax player Luke Shingler, where his sax weaves around a subtly infectious riff from Dave Cureton. Sometimes the band’s ambition can go a little awry, as in ‘Fade To Grey’, where a technical problem meant that the band had to stop and restart the song, and even after the restart there still seemed to be a problem, and in ‘Insomnia’, where Linda Odinson explores the more operatic reaches of her vocal range, in a song that seems perfectly good enough without such embellishments. However, these hiccups are more than offset by appreciation of the ways the band are willing to go in different directions, such as the added heaviness in songs like ‘Colours’ and ‘Redemption’, where a the gentle piano and violin intro contrasts almost rudely with one of the heaviest riffs in the band’s entire set.

There was a bit of an odd ending to the main set, when some of the band waved to the crowd and left the stage, while others just stood and waited for the others to return for the inevitable encore, which added to the continuing underlying feeling that the band really needed this warm up before going on the Cruise. Overall this was an enjoyable evening in The Robin; it’s always a pleasure to see Solstice and it’s equally fascinating to see where Dave Cureton and Co will go next on their musical journey and the different moods they can create. For both bands, it’s the case that it’s always good to hear you play, we just wish we could do it more often.