WMN – until recently known to the world as WOMEN – are about to have their album re-released through DIE DAS DER (available here). So MR took it upon themselves to pin the duo up against the wall and demand answers to some very polite questions about such things as the album, the band and its history, ideal performance spaces, and the simultaneously creatrive and destructive effects of beer and partying…

Thank you very much for taking time out for this interview and congratulations on the re-release of your self-titled album via DIE DAS DER on the 8th of February. So, why self-titled?

Gareth (Drums): Thank you. So yeah, why not? When we initially self released this record last May we had recently enforced a name change because we wanted to be like all those cool bands that don’t use vowels anymore, haha tongue in cheek much, but yeah, WMN, we just wanted to hit that point home. That and the fact we couldn’t really be arsed naming it anything else.

When writing the material for the album, did you have an idea of how you wanted it to sound, or did each of the tracks and the whole thing take shape as it was being developed?

G: Most of it was already pre-formed, but a lot developed in the studio with Jimm Zorn at the old Black Country Recording Co. He really shifted our focus and it ended up sounding much more horrible than we could ever have hoped for.

J: I definitely didn’t have an idea, personally. All of the songs, apart from the final track “FRWLL”, are old or at least based on old ideas. It was like a creative purge for me as a guitar player, the riffs and the songs had been bothering me for years and they needed to be recorded and moved on from.

How long have you been working on the material? And what changes has it gone through during that time?

G: Most of it was written over the course of about a year, some of it wasn’t. Everything has changed. We’re always changing the songs. Some of them don’t sound the same week on week. Keeps it fresh. We like to keep listeners on their toes.

J: I’d say about 3-4 years. One or two of them could have ended up on the previous records. And yeah, we’re constantly changing it up. I suppose it’d be an issue if we were a massive stadium band but no-one other than us ever hears it so we aren’t bothered! Haha! We just enjoy it for what it is.

Can you tell us about the themes on the album and where you took inspiration from?

G: The usual… death and destruction. Haha. The never-ending mortal anxiety attached to existing in this endless stream of shit we call life. Probably. I don’t tend to write lyrical content in the first person either, but some of it will be from personal experience. You can make your own minds up.

J: We tend to be on a totally different page lyrically. I like metaphors, and combining personal experiences with weird stuff about space or mythology or something. A good example of that would be “52 Years An Imbecile”. For me, that title is about those old, right wing idiots you see in pubs, forlornly staring into a drink, angry at everything. Lyrically it’s on a different planet, but it’s all open to interpretation.

Can you give us some background on the band, how you formed, and what it was that drew you together to make music under the name WMN?

G: We’ve been playing together for over seven years now and I don’t think we know how to stop. I can’t even remember how or why we started this, I just turned up one day haha, but we do have a mutual appreciation for the two most important things in life – riffs and volume – so that’s a plus.

J: Yep, seven years of going nowhere! We’ve been in various bands over the years, nothing of any note where I’m concerned, but Gaz has been around. Me and our old guitarist Ron had been trying to put a band together for years before we met Gaz. We just couldn’t find a drummer who we gelled with, someone who liked to jam, and chat nonsense about bands and not take it too seriously. We had instant creative chemistry from the off, and we got on pretty good, so it just worked.  (For us anyway, still haven’t got anywhere!)

How has the band developed over the years?

G: We started out quite like that second hour of a party, everyone’s starting to hit the dancefloor, and someone has already accidentally smashed a glass, and now we’re six hours and 12 pints in, pissed up, and face down in the bushes outside…

J: I don’t know, it’s difficult to think about for me. Like how do you effectively evaluate your own creative output? The band is just us, but at the same time you call yourselves a “band” and assign something , a name or whatever – in this case WMN – to it and that becomes a separate entity. You start to think to yourself, what does WMN sound like now? Does this riff sound like a WMN riff? And of course it does. Because WMN is us, so whatever we play is what WMN sounds like. Pretty deep huh? We’ve developed as people, so the music has developed too. I think we’re tighter as musicians now, and on occasion can be pretty formidable live. We’re still here which is a feat in itself. There’s been tons of local bands that have come and gone, bands that we’ve played with or shared lock ups with – but we’re still here. I like that about us.

WMN used to be a trio, yes? Does the duo “format” work better for you now?

G: We used to be a trio called Women. We changed our name slightly to not just differentiate ourselves from that old Canadian band, but also because we felt we were a different entity as a duo. We still play some old stuff live and we’re essentially just a new version of that band. We’re enjoying our ‘less is more’ approach, and we got plenty of good reactions last year so we like to think it’s working yeah.

J: I guess so. Maybe? I’ve been told that we’ve somehow managed to get heavier despite losing a member. Jury’s still out for me. It does change your perception in a live setting though. It’s like I’m up against the wall, with no one to fall back on if I get something wrong. Not in a bad way, I like it. It’s like we’re outnumbered, we’re the underdogs.

Is there a musical vision or concept for the band? And if so, how do you seek to capture that in music?

G: Literally none whatsoever. I love all those prog bands with concepts and massive lyrical storylines, but that’s not us. We just like to play hard, and play loud. Or failing that, just be really unsettling and horrible.

J: Yeah, none. It’s all kind of accidental. For instance, our cover art will just be picked at random. I’m a visual artist and illustrator outside of the band, so normally it’s just something I’ve worked up or found from years ago and decided to use. We used a drawing done by one of my partners mom’s foster kids on the last release too, because drawings by five year olds are just ace.

G: We’re both a massive fan of Melvins – the whole back catalogue, from the stupid unintelligible nonsense and the doom epics, to the silly pop songs and the ripping bangers they’ve put out over the years. It’s all brilliant.

J: Noise rock in general. There’s been a lovely resurgence of that the last few years and we’ve assimilated it accordingly. Melvins have had a perpetual influence on my guitar playing and riff writing. The most recent Whores record “Gold”, and their old stuff too. Part Chimp “IV” and Pissed Jeans “Why Love Now” both had an impact on some of the tracks.

G: Yeah, Whores. Everything they do is actual solid gold. If you’re a fan of any of these bands you can listen to us and know immediately how it’s impacted on our material.

What does the act of making music mean to WMN?

G: It’s just something we like to do. Nothing more to it really.

J: Yeah it’s fun. It’s a place for me to rip off my favourite riffs and an excuse to get out the house.

Early days I know as the album is still relatively new, but what does the future hold for WMN? Is there more music in the works?

J: Now that I’m free from the old riffs I’m positively bursting with new ones!

G: Yeah, there’s always more in the works. We’re always doing something new, week in, week out. We spent the majority of 2018 writing brand new stuff, and testing it live, then changing it all, writing even newer stuff, changing everything again. We were probably halfway towards a new record when the studio fire happened in November. We don’t really need to talk about all that, it was a major setback to the band, sure, but we’re still here, and thanks to the kindness of just about everyone we hold dear we’re steadily building up our gear again, slowly putting the practice in again, and we’ll be back on it in no time.

J: We have a few things in the works for 2019, but nothing to share as yet. I became a father in November and we planned a break from shows anyway but we didn’t expect to lose our rehearsal space. The intention was to knuckle down, get some good jams in and take our time writing (for once!) We’re slowly getting back on it now, everyone’s been so lovely in the wake of the fire.

G: We’ll be lending our support to the DIE DAS DER benefit show for Black Country Recording Company on Saturday 9th February, at Muthers Studio in Birmingham, where we will be selling the new remastered WMN record on the merch, so come down and support a worthy cause and pick up a copy while you’re at it!

What would be the ideal setting for a WMN performance?

G: A dirty cramped horrible little lockup show, everyone locked in, crawling the walls, no escape.

J: Late at night, when everyone is plenty drunk at a party. Our music is made to get f**ked up to. Either that or Wembley stadium. 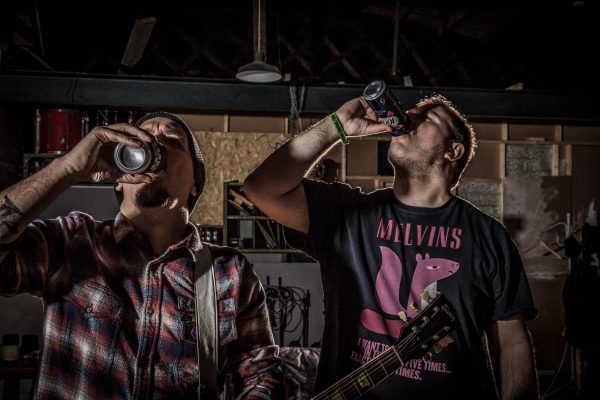