“The Faith & Patience’ is another level for us visually and sonically.”

Electric River have been on the scene for a few years now. How do you feel the band has changed in that time?

We’ve evolved a lot in terms of sound and we’re really proud to have done that in as much of a natural way as possible. Aside from that, we’re still very much the same kids that met all those years ago in the garage- only with a slightly better alcohol tolerance level.

You’ve built up a following the old fashioned way by gigging relentlessly but the buzz around Electric River has been growing of late, have you noticed an increase in your crowd because of this?

Definitely. What’s also nice is that we’re a band that is starting to attract people across a range of genres, backgrounds and ages which we’re all for. We want to be a band that’s inclusive of everyone.

‘The Faith & Patience’ is technically your third album but the other two have all but vanished off the face of the Earth (and by Earth I mean Internet, obviously). Are you trying to distance yourself from your earlier efforts?

Technically it’s our 2nd! Everything else we’ve done has only appeared on a load of EPs, but yes, in some ways there is an element of distancing ourselves. We’re still really proud of our first album as we were so young and achieved a lot on our own merit, but ‘The Faith & Patience’ is another level for us visually and sonically. It’s like starting a new relationship . We wanted to present ourselves properly and not have an ex still knocking about on the scene.

Would it be fair to say that Electric River have found their sound now or can we expect some surprises in the future?

We’ve definitely found a sound we’re comfortable with, that feels completely integral but as we’ve always evolved, we see no reason to stop now. In fact the very last song on our album was arranged and produced in a way that may offer us the opportunity to do just that on our next record – without causing a shock to anyone’s system.

All the songs on ‘The Faith & Patience’ seem tailor made for a good old singalong, is that something you consciously go for does it something comes naturally when writing the songs?

We never preconceive those kind of moments. If people feel they want to sing a long, then we’re honoured, but we also respect the fact that a lot of people like going to gigs just to listen. When we wrote the album – we weren’t exactly playing to big crowds, so the whole singalong thing was never on our minds. If it is gonna happen, it is gonna happen.

Recording for the album started in early 2013 – why has it taken so long to come out?

The recording and production of the record didn’t take long at all. It was everything else.

Because we did the whole project independently, we had to take full control over things like artwork and music videos (amongst other things). Needless to say we were out of our depth and very often broke, but knew what we were going for and just wouldn’t allow the project to fall short of what we had in mind. We then had to find a label willing to put the record out, which began the entirely separate process of an album campaign and building that buzz you referred to earlier.

You’ve been compared to people like Bruce Springsteen and The Gaslight Anthem. How do you feel about these comparisons?

We’ll take that. In turn, both of them have influenced some of our favourite bands so we can’t complain despite it being an entirely American line up.

‘Keep The Engine Burning’ is an ode to Wilko Johnson, can you tell us more about that and also some of the inspirations for the other songs on ‘The Faith & Patience’?

Engine is probably the most positive song on the record and is a celebration of life during the darkest of times. Wilko’s story is incredible- a guy fighting terminal cancer that flies this inspiring and positive flag about having never felt so alive. It’s a strange irony and we all know someone affected by the big C so when we were writing the song it really struck a chord.

Other topics that spring to mind on the record centres around ‘growing up,’ life’s hardships, love (and loss).

We wanted the album to be written from a more internal place so that our lyrics in particular were as integral as possible and so other people could connect with the songs in their own personal ways.

This last year has been a pretty busy one for Electric River, what have been the highlights?

Putting out the album is definitely up there, along with some headline festival appearances and of course touring with Lit.

What’s next for Electric River?

We’re currently in the middle of working on some more music vids and getting the word out to a wider audience hopefully with a big fat tour later this year. We’re also really looking forward to playing a few more festivals and have just started work on a follow up album. 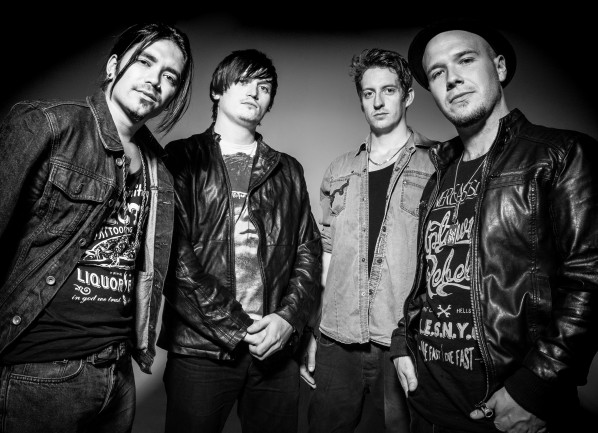