“…the Black Metal “movement” has become so watered-down, compromised, and essentially toothless.”

It’s been almost exactly three years since the release of your first full-length, Edictvm DCLXVI. Musically speaking, how have the band developed since that album?

We are continually evolving. It isn’t so much a conscious choice as it is a compulsion, I believe. As far as our sound goes, we have drifted into a more violent and chaotic realm, in contrast to the epic and grandiose tendencies of our first album. Also, Edictvm DCLXVI was written and recorded entirely by myself and N. Vathron. Afterwards, with the addition of Profana on drums, it has shifted the dynamic of our material somewhat. That said, we haven’t lost touch with what Wormreich truly is.

What was it that you wanted to achieve with Wormcult Revelations? (reviewed here) 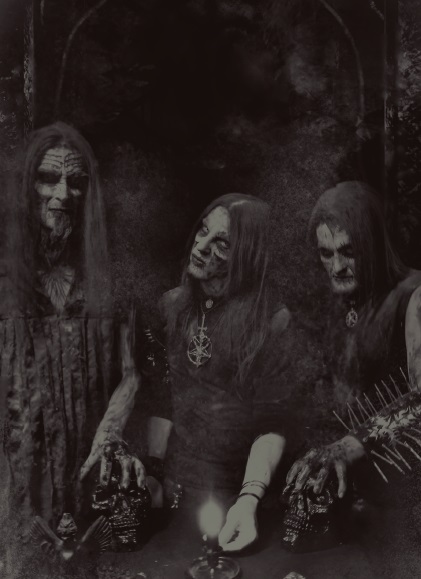 We wanted to create something with true integrity, a monument to our own interpretations of what Black Metal and Satan are to us. We aren’t out to reinvent the wheel. We know what resonates with us, and that is what we want to hear. Wormcult… is also intended as the precursor to our next full-length, III: Vril.

How long were you working on material for Wormcult Revelations? Was there material in the works during the writing of Edictvm DCLXVI?

The material actually came together fairly quickly, over the course of a month and a half or so. Of course, there were a few ideas that we had been working on prior to that, but nothing concrete.

When writing for Wormcult Revelations, did you have an idea of how you wanted it to sound or did each of the tracks and the whole thing take shape as it was being developed?

I had an overall impression that Wormcult needed a very religious and ritualistic atmosphere. That aside, we simply went with our instincts musically and allowed it to develop naturally, without forcing anything.

What are the lyrical themes on Wormcult Revelations and what inspired them?

The themes are deeply personal, and somewhat abstract, but they all derive from my own interaction with Satanic thought and ideology. The lyrics themselves are a stream-of-consciousness conveyance of images and visions in regard to those concepts.

On Wormcult Revelations there are four ‘Revelations’. Can you tell us about these, what they’re about, and how they relate to each other?

The ‘Revelations’ are visions that came together through our own realization that we had committed ourselves to walking the path of no return. There came a great sense of certainty and clarity of purpose through this realization. It was really very liberating to experience, and thus the concept of having these as ‘Revelations’ seemed only fitting. In relation to each other, they are interconnected through theme as well as essence.

What inspired the band to take on this four-part composition? And how did it evolve?

The creation and evolution of this entire release came about so naturally that we have honestly never taken the time to question why it ended up in four parts. We had no intention to create a multi-part concept record; all I can say is that it simply felt right. The decision was made before we had even truly thought about how this release was going to play out, overall. I suppose when events unfold in such a way, it is best not to take it for granted and ask ‘why’ too much. We can only hope that the creative process on subsequent releases goes over so smoothly, but we are realists, so we shall see. We are just grateful for things to have happened the way that they did this time around.

What role do the two ambient/atmospheric instrumentals play in Wormcult Revelations?

The two ambient pieces, ‘Shaare-Maveth’ and ‘Codex Lvciferivm’, were composed by N. Vathron almost on a whim. It seemed appropriate to allow some space between the main musical pieces, and it is also an homage to our ambient influences. That influence also played a large part on our first album.

Who designed the artwork for Wormcult Revelations? What was it about their work that drew you to him/her?

For this release we enlisted the services of a Brazilian artist by the name of Rafael Tavares. He has done work for the likes of Immolation and Blood Red Throne, along with our labelmates Azaghal and Killgasm. There was little question after we had encountered his work that he was the right person for the task. He demonstrates a very astute understanding of occult imagery and aesthetics.

How much direction did you give him in its creation?

We simply provided Rafael with a general description of what we were aiming for. We had full confidence in his abilities and we allowed him to take it in his own direction. We were not disappointed in the least.

Why choose to work with Moribund Records for the release of Wormcult Revelations?

Not only were we fans of Moribund’s roster (past and present), but our drummer had a good working relationship with the label through his previous band Blood Stained Dusk. When presented with our work, they had taken a keen interest in the project and were very enthusiastic about what we were doing.

Is there a theme, a concept, or a philosophy that underpins Wormreich’s music?

Only Chaos and Satan. They are the most important facets of what we do and who we are. Individually, we all possess our own philosophies and points of view, but we are intrinsically connected through these two main factors.

Are there any influences outside of music for Wormreich (literature, art, etc.)?

Occultism and religion in general, violence, history, the inevitable self-destruction of humanity, etc.

What does the act of creating music mean to Wormreich, individually and collectively?

Creating music is an absolute necessity for all of us. It is a cathartic compulsion, and is perhaps the most honest thing that we could be doing in this world.

The band emerged from America’s Bible belt. How does a band like Wormreich exist in such an environment?

Because we must. Though the facade of the self-righteous, God-fearing South has shown many cracks over the years, it is still a very potent force. In many ways, it is this antagonism towards that which surrounds us that is quite inspiring. Since its controversial beginnings, Black Metal has weathered many storms and has come to be regarded as an art form in its own right.

Given that little has changed in western culture – for example, Christianity still holds power over many, and capitalism and the lure of its commodified lifestyle reigns supreme – has black metal become a cultural necessity?

I wouldn’t know if it is culturally necessary as a counterpoint to any one thing, especially now that the majority of the Black Metal “movement” has become so watered-down, compromised, and essentially toothless. At the same time, I believe that the essence of Black Metal has remained pure and will continue to persist for a long time to come.

What does the future hold for Wormreich? Is there more material in the works? An album?

This is only the beginning for us. As I mentioned earlier, we are working on another full-length, titled III: Vril. For that we will likely be in the studio late this year or in early 2015. In the meantime, we have a few splits in the works, and we are also in talks to have our first album reissued later on in 2014.

We currently have several U.S. festival dates scheduled so far this year. Overall, the plan is to begin touring before too long. One of our major goals is to cross the Atlantic and begin appearing in Europe, both on the mainland and in the U.K. As to when that will happen is really anyone’s guess at the moment.

Only that we appreciate the support. Hails! 666.