“Our expressions are too big of a bite for some beings. They choke on it until their heads become blue and purple. And when they lie on the ground and their eyesight gets blurry they eventually puke the mess out again and cover their faces with their own sticky inability to digest something solid.” 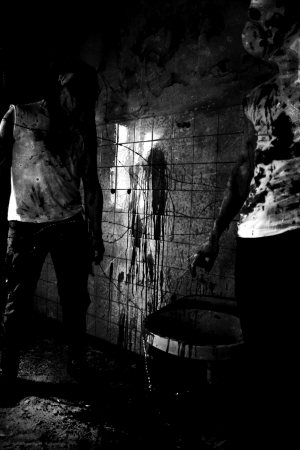 Jason: Hi. Thanks for taking time out for this interview and congratulations on Vertilger; it’s a fantastic piece of work (reviewed here). It’s been three years since Psychohygiene was released. For you, how have the band and its music developed in that time?

VFDU: Every moment is a ripening process which is experienced by individuals and also by band-organisms. Until the organism is overripe – and thus rotting is the last consequence. A ripening of undeterred impetuses, confusions, conceptions and the skills to transfer these things into music. This was happening after Psychohygiene. The result is known as Vertilger. When will the rotting of VFdU start? We will see.

Jason: Psychohygiene was quite the achievement, musically and conceptually. What was it that you wanted to achieve with Vertilger?

VFDU: We wanted to take away the tensions, the pressures, the strains in our heads…setting our personal shit into tunes…the images and thoughts of our brains…

VFDU: It is influenced by the natural principle of life. When we began to feel it – then this principle was not only able to preserve our lifeforms but also to punish us. The basis of vital existence is aggressiveness. We all have to exploit foreign substances to survive and to (pro)create. The tree is like the cockroach. The cockroach is like the wolf.

Jason: Can you tell us about the album title, its significance and how it relates to the music?

VFDU: Vertilger, exterminator, the one who exploits. The Vertilger can be found in the first cell as well as in the most complex organisms. It is living in a baffling sauce where destruction and creation is. Overcharging and burdering. Hard to understand – maybe as hard as the musical synonymous?

Jason: Can you tell us about the artwork? Does it relate to the music and the album concept?

VFDU: Of course there is a relation to the rest. There is an own preparation for every song which can give a hint of the meaning. The photo in the middle of the booklet shows us as beings who bleed and exploited the past years for making this music.

We planned and prepared the most part of the installations by ourselves. The guy (L.V.) who was responsible for the artwork of Psychohygiene combined the photos to the result.

Jason: The outline of the concept describes the “comprehension of the obliteration” as the “initial point for the musical and lyrical abstractions” for the album. Could you elaborate on this notion of obliteration as fetish, as a means of expression for the “inferior human being which is not able to realize the meaninglessness of existence”?

VFDU: There is an ichneumon fly which lays its eggs into a grub. Its breed will hatch out and feed on the organism of the grub. The breed kills while it is growing. The new lifeform can only exist by killing another existence. The human fetus sucks its mother, swallows the foreign nutrients while it is growing. The mother is killing other masses. Exploitation. Hence the fetus can exist.

Is there a fetish noticeable? We don’t think so. There is only a principle of life. The idea of living within a fetish is connected with the project.

But both notions are mainly not noticed by the mass of human beings.

And in the depth of existence there is no greater meaning. Only principles and purposes.

Jason: Vom Fetisch der Unbeirrtheit’s sound is very unorthodox, the structure of your albums and the individual tracks follow very unpredictable routes. How do you approach composition? Do you have an idea of how you want the songs and your albums to sound or do they take shape as they are being developed?

VFDU: They take shape in our brains before we know anything about it. Whatever. Then we try to dissect the brain into an idea.

VFDU: It starts with a pressure in the brain. Confused about a state of being. Then a letter. Then a note.

VFDU: We don’t live in a vacuum. But we will not name any bands here. Jason: Whatever has been conventionally understood as “music” – its structures, its content, its syntax – are completely abandoned, obliterated even, in your works. Is true expression rendered impossible by adherence to such things as style, genre, or what have come to be considered “conventions” of music?

VFDU: There is no obligation to search for new structures and sounds. But if this search is directly given by the structures of your brain then you have to follow this path.

Jason: What does the future hold for Vom Fetisch der Unbeirrtheit? More destruction? Is there more music in the pipeline?

VFDU: No specific music by now. But weird thoughts of course and maybe we will express it in musical tones again.

Jason: Will Vom Fetisch der Unbeirrtheit be playing in support of the album? If so, will we be seeing you in the UK?

Jason: What would be your ideal venue or setting for a performance of Vertilger?

VFDU: In the belly of a fat and pregnant woman. The fetus listens to the tones, dances, laughs, cries and swallows foreign nutrients.

VFDU: Some people think that we are trying hard to be different. That our lyrics don’t make sense. That our music contains no structure. Those people think in categories that we devoured a long time ago.

Our expressions are too big of a bite for some beings. They choke on it until their heads become blue and purple. And when they lie on the ground and their eyesight gets blurry they eventually puke the mess out again and cover their faces with their own sticky inability to digest something solid.

And when they lie on ground we are in our small chamber for bleeding new tunes again.