“I’ve got a cross-trainer for sale pretty cheap. Hardly used.”

To begin, can you tell us about the band history, how you formed and what it was that drew you together to form Ultimate Grand Supreme?

Benjamin: We all met through musician classified ads, so the story of getting together is a bit dull in that respect. My motive for forming the band was that I’d spent since 2001 doing a band called Mitch & Murray. The label we were on folded and the last line-up of the band broke up so I was left in limbo as to whether to carry on or start something new. I put an ad out asking for anyone who wanted to experiment with noise and texture rather than writing songs, and Dave answered. Lee joined after our original drummer dropped out.

Dave: Me and Ben originally met when we both placed adverts for musicians to form a band at around the same time. I’d previously had some bad experiences trying to meet musicians to start a band. A fair few of them were loons. I remember Ben mentioned careering by PiL along with bands like the Birthday Party. I was pretty happy to start making music with him there and then. We held auditions for other members for a time. A little while later we met Lee in a pub and we clicked. It helped that he had the same interests music-wise, and that he was an all-round nice chap.

Lee: As it happens, I’m actually the second drummer of UGS. Ben and Dave already had done a couple of gigs with another Drummer, but he left the band and they were looking for another just as my last band was breaking up. Similar music interests sealed the deal I guess.

Who are the band’s influences and how do they inform your sound?

Benjamin: We originally bonded over a mutual love of The Birthday Party and Shellac, I think. Bits of Sonic Youth and Fugazi too. It was mostly to do with finding joy in dissonance and unpleasant sounds and a reckless abandon towards melody and structure. I think Lee brought out our collective interest in Krautrock too – people like Can and Neu! – due to his style of drumming. It all adds up to us looking at our instruments less as things to produce melody and harmony and more things to make noises with. A guitar is a much underused percussion instrument.

Dave: As a band we met through our combined love of noisy guitar music. Kraut/Post rock as well as nastier stuff like Jesus Lizard and Shellac. The fact that I loved the process of working with Synths, loops and effects sent us off in a slightly different direction. I was fascinated with the idea of creating noise with electronic instruments.

Lee: For me personally; mostly Krautrock, some of the No Wave era too. There’s a natural compulsion for me to play in that style of repeating rhythms and building up on them.

Your bio states that you produce semi-improvised noise rock based on extended jams tied together into a set of noise and texture. How does this begin? Do you prepare ideas for rehearsal beforehand?

Benjamin: We rarely prepare anything before coming in, beyond some weird loops that Dave has produced sometimes. We walk in, set up, and at some point someone will start doing something while they’re waiting- like making a noise or playing a little riff. Then we all join in and that might last up to 30 minutes. Usually the first two thirds of a rehearsal will be us flitting from improvised jam to improvised jam. Then we realise we should rehearse something else.

Dave: I have been known to turn up at rehearsal with some sort of section or loop that I’ve messed around with at home. On occasion I’ve grabbed Ben and Lees attention and after experimenting for a few rehearsals they have become mainstays, sounding nothing like what I would have had in mind when I was originally messing around with them at home.

Lee: I don’t think we’ve ever prepared ideas really. Most of the time one of us will just throw something out and if the other two of us hear something in it then we’ll throw something back. It’s what pretentious people would call “an organic process” I guess.

How do you decide what stays and what gets discarded?

Benjamin: I’m not sure we do, they just drift away. We tend to just naturally come back to some things and forget others. Almost everything we do is recorded on this little handheld Boss recorder I have so sometimes we revisit things from months back, but usually the rule is that if we’re still playing it then it’s a keeper. If we forgot about it then it couldn’t have excited us too much.

Dave: When basing songs on extended jams I think it is important to have some quality control. We have recently binned about 8 tracks on the basis that we didn’t feel inspired to play them any longer, or we hadn’t returned to them for weeks. Normally if we all feel a jam is strong enough to return to it’s because it sounds exciting, we enjoy playing it, or in some cases because its more challenging for us to recreate.

Lee: I think it depends on if we feel that the song has potential to develop into something more than what it started as. And if we enjoy playing too.

Benjamin: We’re not a jam band in the sense of extended solos or anything like that. I hate to sound pretentious, but we’re probably more akin to some sort of jazz thing where we just play and see what happens. We know roughly how things go and we know roughly how long they should last, but as a lot of it is done by manipulations of sounds with the odd improvisation, we just see where it goes. But for all that, we’re quite listenable. We’re certainly not conducting helicopters or playing pianos with screwdrivers.

Dave: All of our live sets have had a path to them. We know where we will start, and where we will finish. We have never said we are going to play this section 5 times or anything like that. We try to keep builds natural and listen out for the other band members prompts that it’s time to move onto the next thing. We do have to have an estimate of how long a song will last to make playing a 30 minute set viable.

Lee: We always make a set list of the songs we want to do and then decide which order would be best to play them in. We always try to end with something quite visceral. I can’t answer the other question I’m sorry to say. I’ve never really put a definite time/space limit to any of our songs. We just all seem to know when one should end

When jamming, what cues are you looking for? What are you listening for from each other? And how does it affect your responses?

Benjamin: Oddly, I’m not sure we are. We’re very unprofessional when it comes to technical ability. If someone asks me what I’m doing I couldn’t tell them, which is what I think we like. Everything’s a bit visceral rather than calculated (which is what I’d missed from my own music for a while). I usually hook onto what sort of feel Dave is producing and whether I need to underpin it or overlay it. With Lee I’m normally sussing if I can do something percussive with him or whether he’s just nailing it all down. We’re not trained or anything. I did a few months of a BTEC in Popular Music once but it hasn’t served me well personally.

Dave: As far as I’m concerned, sometimes it’s just about providing some kind of bass drone, background noise, or repeated sequence. It’s nice to let Ben and Lee mutate their sound while I provide some kind of backdrop or driving force.

Lee: When I’m listening to what Ben or Dave are doing, especially if it’s the first time, I just try focusing on the root punctuations and tempo of what it is there playing and try to fit something into that. When it becomes instinctive, I try seeing what else I can add too into it or what the song would be if we veered off in this direction or that direction. 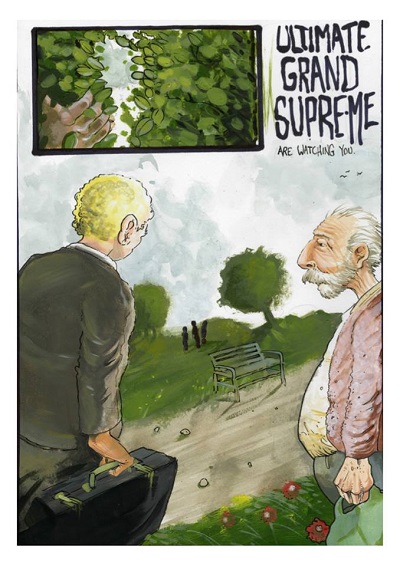 I see that some of your previous performances have used members of the audience as additional musicians. Risky? Or do these performances open up new avenues of creativity?

Benjamin: I think the biggest risk would be getting some Joe Satriani type who wants to fret wank and then hand over a solo to me. We actually just wanted people to get up and do whatever they wanted. The whole idea was experimental in the sense of “we have no idea how this will go”, rather than a conceptual piece. You haven’t lived until you’ve used a BD101 delay pedal to manipulate a military kazoo played by a 61 year old man. We’d happily do it again. In fact we’ve often talked about how to incorporate it more. We’d hate it to be a gimmick or a party piece, but setting up a night where it’s a discrete set is something we’ll do again.

Dave: We did have some fantastic vocal rhythm from one guest that did interest us. We have always wanted to play around with vocal rhythms and noise but haven’t quite fathomed the right outlet yet. So it was interesting to see that. We also had one guy on a kazoo through a delay pedal which speaks for itself.

Lee: We Have?? I couldn’t say. I’ve never been privy to that experience.

Your Bandcamp page has four tracks on it at the moment. Are there more in development?

Benjamin: Definitely, but we’re not sure when. Money and time are factors here, but we’re gigging as regularly as we can. We’re planning on putting some downloadable stuff on Bandcamp, maybe a couple of CDs.

Dave: Well the four tracks are currently previews from live recording at our practice room. In all honesty they were used with the intention of giving people an idea of who/what would be playing live. We also put out a video of us playing one of our songs live at rehearsal room. A Tribute to Bjorn Again.

Any plans for an EP or an album?

Benjamin: Definitely again. We’re actually setting up our own label once there’s a reason to (not much point when there’s only a handful of people to flog vinyl to). That’s all underway in one sense. Maybe sales of the CD and any download contributions will go towards funding it, like a modern day Fugazi.

Dave: We are working on a final list of the key songs that we want to record for an E.P. Then it is just when time and money allows, hopefully later this year

Do you have any live shows coming up?

Benjamin: We’re planning on putting on our own night again soon. We did a show around Christmas where we got the Courtesy Group headlining- which was an honour for us- so something like that will be coming up. Other than that, we’re playing in Manchester on 17 August and we’ve just confirmed that we’re at El Ghost Fest at Muthers in Birmingham on 28 June

Dave: Manchester in August. We are hoping to play local again in the coming months. We have put on successful gigs in the past by just booking the bands we wanted to see. 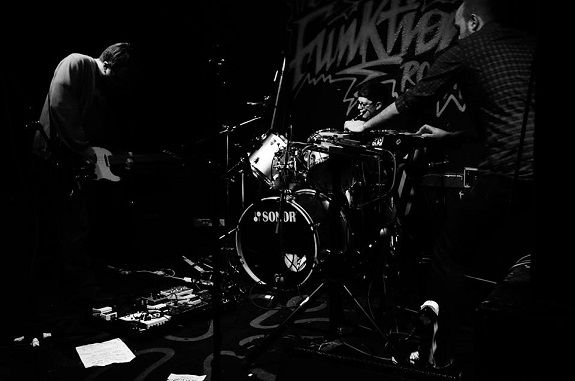