For 20 years, Netherland’s black ‘n rollers Heretic have, in their words, made no compromises, produced no pretentious bullshit, just spilled out pure filth and 1 July 2016 sees their fifth album Underdogs of the Underworld released. Here, drummer Tom Auf Der Axe talks to MR’s Jason Guest about the album, the band, their evolution in their 20-year career and their fantasy show…

Hi Tom. Thank you very much for taking time out for this interview and congratulations on Underdogs of the Underworld.

Your fifth album since 1999, what did you want to achieve with this album?

This is my first full-length with Heretic and to me this is a landmark for where we are now. I started in 2014 and all kinds of cool stuff happened. After the Alive Under Satan EP we started writing new songs and all the hits are on this album. We wanted to achieve maximum party in front of the stage and full-on entertainment on stage when playing these songs.

What kind of progress or development does the album mark since 2013’s Angelcunts and Devilcocks?

Well, according to Thomas Goat and Tony Hellfire the band is finally where it should be people-wise and this record is a real team-effort. Thomas had some riffs and ideas and we arranged everything together. Before we entered the studio, we had already done demos for all songs and we even played some of the songs live to see how the audience responded. To me this album sounds like a genuine organic rock n’ roll record and that is exactly the way I like it!

What are the themes on the album? And where did inspiration come from?

We thought of Mad Max, we were playing with characters on some kind of wasteland. Generally speaking sex and the devil are our main inspirations lyrically. Great subjects for songs. In addition, we are inspired by all kinds of music. Of course Venom, Motörhead and the Misfits are amongst them, but also a lot of other stuff. The main goal was to make a black metal punk magnum opus. I guess we’ll always be four extremely hot studs in a sleazy punked up black metal band because that works perfectly fine for us!

Yes, we did demos for almost all the songs so we could fine-tune them. We were really prepared when we entered the studio, we all knew exactly what to do and recorded the album in just four days. Our producer/engineer knew how we wanted to sound so the whole process went very smooth. We recorded the album in the basement of the legendary Dynamo club, in the centre of our hometown Eindhoven. In between sessions we would be hanging out in a local bar or restaurant. We had a great time and I think you can hear it.

Well, if you ask me it doesn’t really. Heretic still is about catchy songs, but the sound of the band evolved during those years. From black metal to black metal with a lot of influences. We don’t limit ourselves in any way; we’ll do anything we like. You know, 20 years is a long time. We are planning to celebrate the anniversary with something really special later this year.

There have been a few line-up changes in the band over the years with bassist Jimmy Blitzer and drummer Tom Auf Der Axe joining in 2014. What have they brought the band and its music?

We have a very fine line-up. It’s like chemistry or magic if you will, I can’t really describe it. From what I’ve heard from Thomas and Tony, Jimmy and I gave Heretic a second youth. To me it feels really good to play and party together. Besides playing the music we love, we’re supposed to have some fun right? 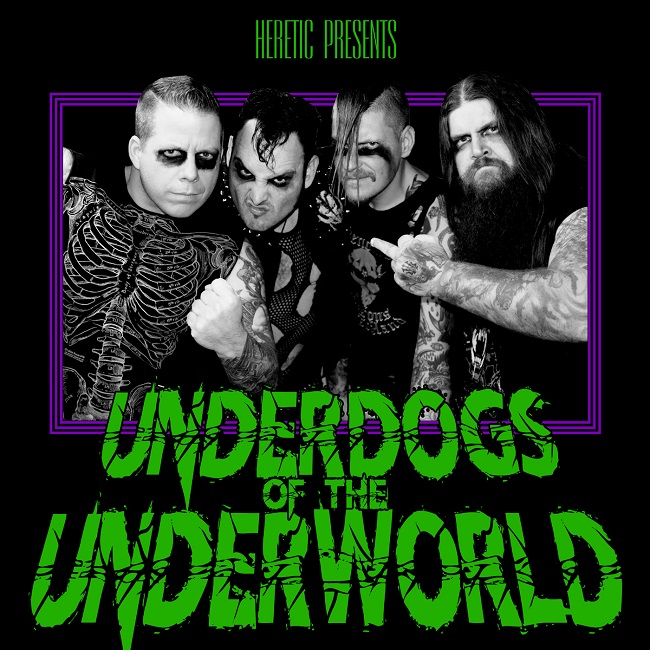 Over the years, Heretic’s sound has transformed from black metal to a more Venom, Motörhead and punk-influenced style. Why this change?

I think it just happened. I’ve only been in this band for 2.5 years now, and it feels like 30 years… no, just kidding. Anyway, I can imagine it’s hard to be playing the same thing for 20 years. The older you get, the more open-minded you become. We still listen to Venom, but nowadays we also listen to Engelbert Humperdinck and the Dixie Chicks. I’m a huge Motörhead fan myself by the way…

What does the act of making music mean to Heretic?

We like to have a good time playing music and we like to entertain. We have some drinks while doing so, sometimes one too many. We’re basically the same as the people that listen to our records and come to our shows. We like music as much as them except we get invited to play our music on stage, which is great. I like to beat the shit out of my drums and have a good time with my band and our fans.

What, if anything, are you looking to capture when making music for Heretic?

Energy. And we project it on our audience. That whole process and feeling are the best in the world, to see people go crazy on the songs the four of us created. It’s like sex, and that’s pretty awesome too now isn’t it?

We’re planning some release shows after the summer and there are some plans to do a tour in the beginning of 2017. We’ll see what comes our way, we’re not really a band that can play 3 shows every weekend because of families, businesses etc. The UK is definitely on our wishlist!

What would be the ideal setting for a Heretic performance?

The ideal setting would be for us to be received backstage by 8 topless 18-year old women: 2 with red hair, 3 blondes and 3 women with black hair. They feed us fresh grapes while they keep us cool with palm tree leaves. In between the grapes we like to eat French cheese and we really like the sight of a couple of midgets (or little people) with sombreros filled with nacho chips walking around. Just for snacking you know. Tony likes a good rum, Thomas and Jim like gin-tonic and I like a little single malt whisky, but not too much before the show. Well, after we’ve enjoyed some of the good things in life, we’ll enter the stage and play our set for a delirious crowd.

But sometimes that is beyond the possibilities, so we are also cool with just a stage, some cases of beer and people rocking out, drinking and shaking their booties. Party till puke!

What does the future hold for Heretic? Is there more music in the works?

We’re writing new songs, we’re in a really productive vibe lately. When you have inspiration, you should use it, not? So I guess you’ll hear from us in the near future.

Every hole is a goal! 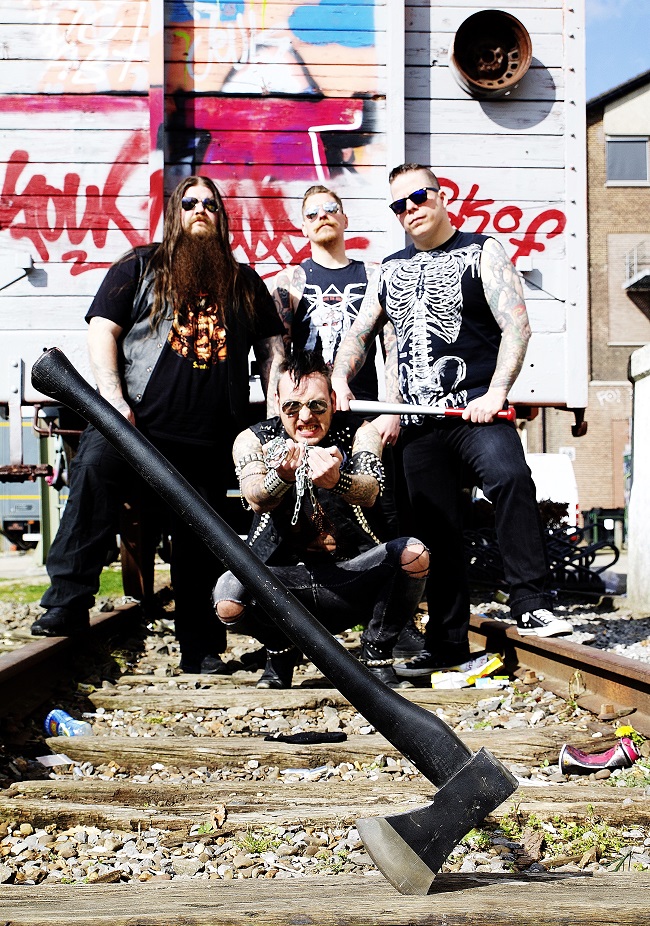