What’s in the name Prog, eh?

There have been a couple of changes with the band since we last spoke (the July 2015 interview is here). First, vocalist and band-founder Jane has left the band. What prompted her departure?

It was a very much a creative decision! Jane was there at the start and was the main lyricist for the band on the Transcendence EP. We had to make the decision as we were pulling the music into very different areas and it was necessary for the future direction of the band.

What effect has her departure had on the band and its music?

A number of things changed immediately. Obviously we became a three piece and with that came extra responsibilities for all of us, especially Alistair stepping up to handle lead vocals. It also sped up the creative process massively. In a sense we felt very energised especially as we had only about a month to record the debut album after we made the announcement of Jane’s departure.

Alistair has taken over on vocals, and is doing a great job I have to say. Did you try out any other vocalists or was the decision already made for him to take over?

Well thank you! We sat down and had a long chat about it and we did consider the options. Ultimately though, Sam and I felt that Alistair had a great voice which could propel and it was also high pitched which enabled us to provide a certain amount of continuation from what Jane did.

The other change is, of course, the band name. Why change from Progoctopus to Oktopus?

What’s in the name Prog, eh?! Well, quite a lot. So much so in that we felt it was too limiting and it was quite stigmatising! Oktopus is far more in keeping with who we are.

Does the new name mark a new beginning for the band?

In many respects yes! With the lineup changes and the sense of invigoration we got from that, we feel that we are just getting started! We’re even more excited for you to hear what is about to come next.

What was it what you wanted to achieve with the album?

Yep, the album turned out really well! We gave ourselves a definitive period of time to bring everything together and had a great time recording with Joe and Rob at Aubitt Studios in Southampton. With their pedigree and enthusiasm, we were in safe hands to ensure everything we wanted came out in the recording. The sound on the recording is how we sound live!

For World’s Apart, it’s very much the latter. We were working on material as we went along. That said we did have a pretty definitive idea of how we wanted the album to sound.

Everything came together super quickly, in some respects, because it had to. Some of the songs like Eyes Open and Worlds Apart were reworked from versions we had done with Jane! Then songs like Minotaur and The Hand on Your Shoulder were arranged in about a four to six week period before recording. In fact, we had the album recorded, mixed, pressed and released in around a month.

What kind of progression does it mark since last year’s EP?

The songs are so much more cohesive yet also more ambitious and adventurous at the same time. It has been well noted but there is a definitive move towards incorporating our jazz and fusion influences.

How did Oktopus approach composition for the album? Do you write individually, collaborate or jam ideas out?

The creative process is a mix! Sometimes it’s a riff or a movement and we’ll jam it out and then develop from there. At other times, one of us might come up with a large part of a song written and we’ll arrange from there. We’re comfortable working remotely together where we will share files on Slack and piece things together online before coming together to rehearse collectively.

What are the lyrical themes across the album? And where did inspiration come from?

World’s Apart is a partly fictional song about when your loved one is living several thousand miles away from you and the tensions that might cause. The Hand on Your Shoulder is a haunting tale of a slightly disturbed man who is stalked by his own alter ego. Minotaur is inspired by a piece of artwork reflecting on the Greek Tragedy. 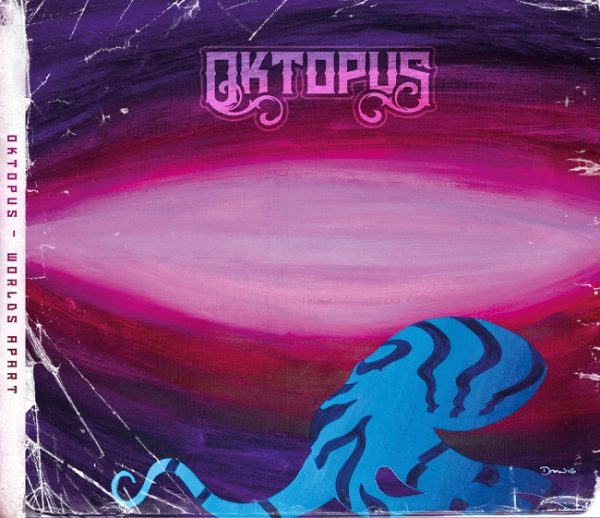 The artwork reflects our sense of adventure and we can go absolutely anywhere we like with it! The album’s title World’s Apart fits the theme.

Who’s the artist? And why choose to work with them?

The cover art is by a talented young artist called David Walker. Alistair brought him on board. He had a great idea and we let him follow it through. The CD layout and design was by John Williamson.

Relatively little. Sure, we gave a little bit of input and feedback as well as some wording, but we trust these guys. They’re amazingly talented and we want to give them the outlet to showcase their talents.

Any plans for shows in support of Worlds Apart?

Yep. In fact, we recently supported District 97 and The Dave Kerzner Band on their UK tour and we have a number of shows lined up including some shows with the great IO Earth. Many more gigs are in the works.

What would be the ideal setting for an Oktopus performance?

Somewhere where the stage, the sound, the vibes and audience are in complete harmony.

What does the future hold for Oktopus? Is there more music in the works?

We’ve already started on the next album! It’s going to be very ambitious. I shall say no more!