I am going to make a small vat of soup…

MR’s Dan Perks sat down with rising local talent Thrones. Vocalist Tom Wasteney and Lead Guitarist Lewis Hopper took the time to give us an insight into the band.

Tom: I’m good thanks! It’s my day off so I am going to make a small vat of soup.

Soup and vocals? You’re a Multi-talented chap then Tom! For those readers that may not have heard of Thrones yet, can you tell us a bit about the how the band started and what influences inspired you?

Lewis: This one’s all yours Tom….

Tom: Basically, I met Oli (Bull, Drummer) through a friend and we clicked pretty quickly so in the heat of the moment we said “Shit, we should start a band!” It was more pub talk than anything but the idea was there. About a year later I set out to gather people to jam with. After talking to a bunch of people that didn’t really fit the kind of profile I was looking for a few names started floating my way. Beasley (Andrew, Guitarist) was uncertain at first because he hadn’t played for so long but he was enthusiastic as fuck. I met Lewis through a mutual friend and sort of bullied him into coming along a little bit (haha). Oli said his friend George was keen to be our bass player and then our full lineup was born.

Lewis: Individually we are all inspired by such a variety of bands but musically we are inspired by While She Sleeps, The Ghost Inside, Acres and Burning Down Alaska. I would say those are the main ones, I could go on forever with the others!

Your first track from Thrones got released mid April, what made you choose ‘Cities Burn’ as your first release?

Tom: Since we started Thrones we’ve written so many songs that we decided weren’t up to the standard we wanted to put out. It’s been a lot of trial and error. Cities Burn was the first song we finished as a band that I think we were all truly happy with so it seemed like the natural step was to take that to Steel City as our debut track.

The track was recorded at Steel City studios in Sheffield, how was it working with the guys up there?

Tom: It was an experience that brought us down to earth I think. Going from whipping through our demos in a budget studio to working in a studio of that calibre was an experience! It was really beneficial because we had the opportunity to really analyse what we’d written. Also, having an outside influence who could give us their critiques was beyond useful! Phil’s a fucking dude.

Lewis: Amazing and surreal. Recording in a studio where some of our favourite bands have also recorded was pretty mind blowing. Phil was amazing. His critique and advice was exactly what we needed to push ourselves even more. It’s such a great environment to work in and we can’t wait to go back and record the rest of the EP at the end of July.

It was announced that you will be taking band photographer extraordinaire Jenny McCord with you on your next trip to the studio, how did that come about?

Tom: Jenny is someone I’d met about a year ago when Thrones was in its early days. I floated the idea of eventually doing some photos for us, and she really liked the concept of following a band from the very start of their…career path I guess you’d call it? Over the past year we’ve built a pretty good friendship and she’s really enthusiastic about our music and what we’re doing. I showed her the song when it was finished and she basically told me she was coming along to shoot with us at our next session. She’s really passionate about music and she’s a great positive person to be around too. 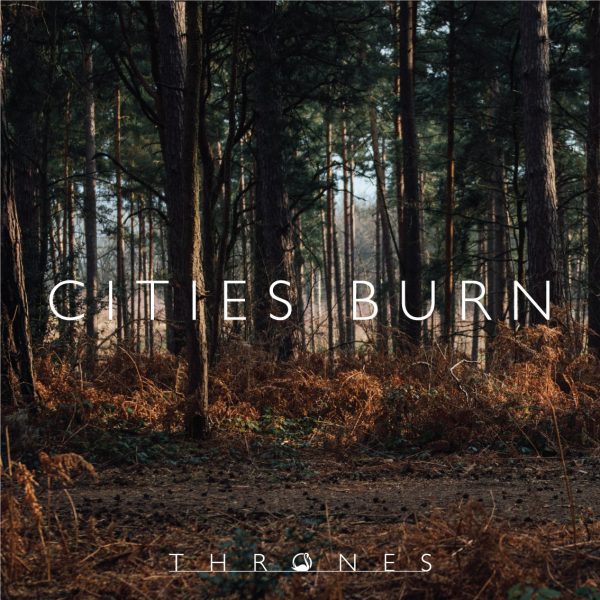 ‘Cities Burn’ seems to be picking up a lot of attention with numerous radio plays and media focus, how has this reaction been for you guys?

Lewis: It’s been overwhelming. Starting out as 5 guys who just enjoy playing music to having our track being played on Kerrang Radio and BBC Introducing is pretty surreal. We never imagined anything like this but all our hard work over the last year writing the EP seems to be paying off.

Tom: We’ve sent the track out to anyone and everyone we could think of that might want to listen to it. The response we’ve had so far is amazing! People that don’t normally appreciate heavy music have found elements in the song that they enjoyed. Getting played by Alex Baker was insane though, I think we were all pretty speechless!

It was announced on Facebook last week that you are back to Steel City studio’s in July to record the band’s first EP, can you tell us a little more about what we can expect from the EP?

Tom: A lot of the songs sound pretty bleak on first listen, but in reality the kind of unifying “vibe” is a positive one. The whole idea of distance is that feeling of isolation everyone goes through at some point in their lives. You feel like you’re basically alone in the world. But the message is a positive one. By all means people can help you, but you don’t need to rely on them to do what you want to do or be what you want to be. Musically the EP is almost a battle between our heavy influences and some really pretty melodic sections. There’s quite a bit of variety and we think that we have 5 songs that can appeal to a much wider audience.

Lewis: Musically the EP contains all of our inspirations as a band. I believe we have found a sound that has combined our ambient influences with our heavy ones. The songwriting has been really natural, which in my opinion is where the best tracks come from as opposed to writing something really forced. I couldn’t be more proud of the songs we have written and definitely think these 5 tracks are the best possible way to show the world what we are all about.

What plans have you guys got for live shows this year?

Lewis: We currently have no plans for live shows. We are fully focussed on the EP at the moment, so as soon as the EP is finished we will be putting it out there as much as we can and will be looking to get on as many shows as possible.

Tom: To be honest I don’t think we’ve thought a whole lot about shows yet. The primary focus for the past year has been writing the EP and making it the best representation we could make of Thrones. There are a few things floating around at the moment but you’ll have to wait and see.

Could one of those things be METAL2THEMASSES?

Sounds like a busy year so far for thrones, Thanks for taking to the time to talk to us and is there anything else you would like to say to the Midlandsrocks.co.uk readers?

Thanks a lot man, it’s been a pleasure. Our debut EP Distance is due for release in August 2015, although a date has not been specified yet you will be able to purchase it through our Facebook or Bandcamp page. If you haven’t already please check us out over at our Facebook page. You can also listen and download our track ‘Cities Burn’ for free on our Bandcamp page.

Shortly after this interview Thrones announced they will play METAL2THEMASSES at the Zombie Hut in Corby on 29 May 2015.