London based metallers The Defiled are back with a vengeance with new album Daggers. Jack Arkell spoke to the band’s keyboard and synthesizer player The AvD about their tour with Motionless in White, the song that he wants the world to hear and the Pledge Music campaign to release the record.

Sitting on the balcony of the deserted main room at the Birmingham Academy, The AvD speaks with an eloquence and articulation that isn’t expected from most young musicians.

The Defiled have joined forces with Motionless in White for a string of UK tour dates, selling out most major cities. It is a tour that The AvD has relished his band’s role in. ‘We’ve been having the best crowd reaction we’ve ever had. Motionless in White are such a cool group of guys, and have a similar ethos and ethic in what they’re doing to us. It’s nice to be playing with a band that is doing a similar thing to what we are; usually we just get lumped in with bands that have such different fan bases. But we’ve had crowdsurfing and circle pits, the kids have been crazy.’

The London based band deserves such a positive reaction, having just released Daggers, their second full-length album. Their electronic-infused sound marks a new direction for the band, and has spawned a number of great reviews in the music press. ‘I didn’t think the reaction to the album would be this big, to be honest. I’ve looked at what some people have been saying about it, and even those who were like “it’s not really my thing, but if you were to pick up an album like this it should be this one”, we’ve had such a great response.’ But the keyboardist is adamant that the band chose to create such a record on their own terms. ‘It’s probably a more accepted sound amongst the metal community nowadays, but when we started doing it, it was uncool. Now it’s cool again. The only advice I’d give anyone when writing music is don’t sit around and think what is cool at the moment, because by the time you’re at the stage where you’ll be someone, it will all have changed anyway.’

The album was released through Pledge Music, a fan-funded campaign that allowed the band to record their LP before the record labels got their chance to jump on board. The AvD explained that this was because ‘you record the album and whoever’s interested will buy into it, so that gives you a more mutual standing with the record label because they’ve bought into what you’ve done, they can’t really tell you what to do. I’d definitely recommend it to any band.’ He denied that the help from their following put more pressure on them to make a record for their fans. ‘If anything, (2011’s debut album) Grave Times was more to impress people, we don’t give a fuck anymore what people think of us. I’m putting myself out there, you’ve got to love it or leave it, you can’t pretend to be something else. This album represents us as human beings more than anything else I’ve ever done in my life. It’s very honest, a heart on a plate record.’ 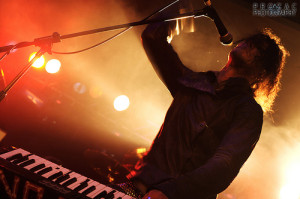 And even though Daggers has only just been released, the band couldn’t be happier starting a new touring cycle. The AvD said ‘I like touring because it fills up your life with experience. You see the world whilst playing the music you love, I can’t think of anything better. You’ll have fights and disagreements with other band members but you’ve got to remember that you’re with a bunch of mates touring around, seeing sights and playing awesome gigs every night. I love touring; it’s what I want to do, all the time.’

But, if The AvD had to select one of his band’s songs for the whole world to hear, which one would he opt for? ‘I’d definitely have to go for “Five Minutes”. It’s about losing someone really close to you, something everyone has to deal with. It was exactly what I felt when I was writing it, and even if you don’t get it now, one day you will lose someone and it will make sense to you.’

Quite where The Defiled will go off the back of their fresh, vital sounding sophomore album is unclear, but one thing is for certain: Not many bands are pushing the boundaries to such great effect, and their fan base can only carry on growing for that reason.

‘Daggers’ is out now through Nuclear Blast Records via Amazon.