“We want to grab people’s attention”

On the cusp of their debut EP release, Peter Keevil spoke with Rich & Robyn of Stone Broken about their approach to hitting the ground running.

Hi, thanks for taking time out to speak with us. You are fairly new on the scene, so please give us a brief history of your band.

We formed in 2013, Rich and Robyn had been in bands together before, so too had Kieron and Chris, so it was super easy to gel really quickly and get to know each other both personally and musically. A lot of 2013 was spent finding and fine tuning our sound behind closed doors before we started working on putting the EP together.

I love the fact that you have prioritised the recording of an EP so soon after forming, most bands would go the path of gigging first and then perhaps recording some months after, so what brought that about?

Well we really wanted to hit the ground running, usually when a band starts gigging, the first thing people will ask is “Do you guys have a CD? Where can I listen to your music?”, so we wanted to be able to give them an answer, or at least something to look forward to.

You have your debut EP The Crow Flies, out real soon (exclusive premiere on Midlands Rocks Weds 8th Oct at 7pm), so how did you go about choosing the songs for it?

We set out to create a 5 track ‘showcase’ which would introduce people to who we are and what we are about, we wanted to grab people’s attention. Each song had to have something about it, whether it be a solid groove or a catchy chorus, so that people can really get into them, if a song didn’t tick those boxes, we put it to one side…it was more a process of elimination I suppose.

You are a new band, so how do you approach song-writing?

There are two ways of writing that work for us, the first is sitting down together with an acoustic guitar, it doesn’t feel as though we are forcing anything out that way. The other way we seem to write songs is actually by accident, we will be tuning up and a song will just kind of happen. Once the skeleton of a song is down Rich will usually start working on lyrics, then we demo the songs and more often than not we will then sit down and find ways to improve them!

What were the key factors behind using Romesh Dodangoda as producer and what did he bring to the table?

We were all fans of his work and always had him in mind from the very beginning, he has produced some huge bands and emerging artists, there doesn’t seem to be a project that he has worked on that doesn’t sound great. He really pushed us to get that extra 10% that made all the difference. He really got what we wanted to do with the record and he got stuck in creatively to bring the whole thing together.

How has the EP turned out for you? Does it sound how you had it in your head or was it all a path of discovery?

We are stoked with how the EP turned out, we went in to the studio with a sound that we wanted to achieve and Romesh bought it to life and took it to the next level!

As well as investing in an EP you have also released official videos (see ‘Let Me Go’ above), which to me shows a real intent on how you wish the public to see you. Was that a conscious plan?

Yeah, I mean, we have the mentality that if you don’t take yourself seriously, you can’t expect anyone else to either. We have tried to put quality first so that we make a good first impression. We spend quite a lot of time looking into what seems to really work and what has the biggest impact and try our hardest to make that happen.

You appear to be picking up a number of live support slots within the West Midlands area, what is the plan on the live front over the coming months?

We have a few dates coming up around the West Midlands which will pretty much take us in to the new year. Next year we would like to push out further and start picking up support slots in places outside of the West Midlands and maybe try and get a few festival slots if we’re lucky.

What would you like fans who attend your shows to take away from that experience?

What we would really like is for fans to walk out at the end of the night singing our songs and to feel like they want to see more of Stone Broken.

Ok, so we have covered off the basic PR questions, let get a little deeper… 

Who is the most vain in Stone Broken?

If this is measured by the amount of ‘selfies’ it has to be Kieron, hands down! If it’s the amount of time in front of a mirror….Robyn.

Who needs a little more guidance when it comes to personal hygiene?

That’s a tough one, I think we are the only band who have a bottle of hand sanitizer in our rehearsal room! But, if we have to choose, it would probably be Kieron, he didn’t wash his hair the whole time we were recording the EP!

Who is the most rock n roll?

Kieron! He likes to get naked when he drinks…I mean in public too!…it’s only a matter of time before he is arrested for indecent exposure!

Who is the most popular with your fans?

Rich probably, he gets recognised the most and tends to have the most people speak to him after we have played.

Who snores the loudest?

Who is the last to stump up when it’s their turn to buy a round?

We were only speaking about this the other day, it’s usually Chris, actually, I don’t think he has ever bought a full round.

Thanks for your time, what message would you like to pass on to Midlands Rocks readers?

It’s been our pleasure!

Our message to the readers would be, thanks to everyone who has come along to one of our shows and supported us so far, this is just the beginning and we have so much more that we want you to see. If you are new to us, we hope to see you at a show real soon, we love meeting you guys! Keep music live!” 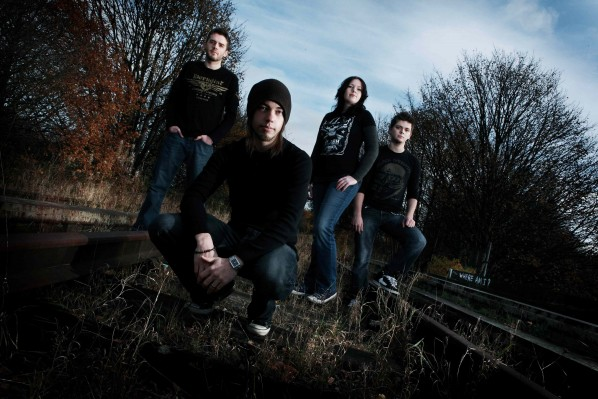