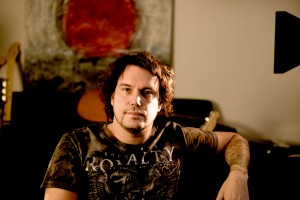 You have been absent from the melodic rock scene for quite some time now, was there a reason for this and what brought you back to the biz with Revolution Road?

In 2011 Manfred Mann flew me to London for 2 weeks to rehearse the Earth Band Show. He wanted me to be a stand in singer in the Earth Band in case something happened. Unfortunately that hasn’t happened yet.

For a while I did not believe in CDs and in Record Companies! I thought downloading was the thing but you don’t get so much back from that.

I’ve also been building up my studio and been looking for the perfect sound and finding the right equipment & players. That takes time.

Alessandro Del Vecchio (Ale) & Gregor Klee the owner of the record company, Avenue of Allies, came up with the idea for Revolution Road.. Apparently they have been missing my voice… I haven’t released a CD since 2007 and that was with Razorback. I was very flattered when I heard that they would like to have me on a new album. Ale contacted me and sent some songs of his & he asked if I wanted to sing them and release a CD. I thought the songs where very good so I decided to give it a shot. I threw in a 4-5 of my own songs to make the album more me.

Alessandro Del Vecchio is a respected and ultra busy song writer / producer. What was it like working and writing with him?

It’s been great! He gave me the artistic freedom to do what I wanted on this album. He seems to be a man with many talents. Ale has done a fantastic job! It’s hard to bring & keep a band together… but he seems to be a man who gets the job done, with a lot of drive & energy… That’s a good thing.

Has the Revolution Road album turned out as you hoped and are you proud of your performance?

It turned out a bit better actually. Ha!

I`m just happy that quite a few great musicians’ friends helped out in the process. All the guys in the band are very good musicians and song writers… and I think Ale and the others’ song writing and my song writing blend very well together.. Unfortunately we haven’t sat down in a room to write a song together yet. I mean I live in Stockholm and Ale lives in Milan. But the internet makes the world a lot smaller these days.

I´ve worked close with Thomas Jakobsson, Marcus JidellI & Stefan Jonsson, who played on the  demo version of my songs for this album. I guess Alessandro did the same with the rest of guys in the band. My vocals and some instruments were recorded in my studio in Stockholm the rest were done in Italy. Ale and I decided to keep some solos and rhythm guitars that Marcus Jidell and my fellow SIP colleagues Mr Jonsson & Mr Jakobsson laid down on the original versions to get the SIP vibe.

Can you tell us about a few of the songs on the album and any interesting stories behind the songs?

“Ain`t gonna give my heart away” is a song that Alessandro wrote and I think you can feel his Italian blood on it. Ale also brought in Alex Beyrodt (Voodoo Circle, Sinner, Primal Fear) and he does a fantastic guitar solo on it. It turned out absolutely great!

“Pretending Hearts” is about being single & confused… Me and my mate Thomas Jakobsson (Snakes In Paradise guitarist) wrote the lyrics on that song together – we were both single at the time. After some very wet weeks of being in bars, clubs in Stockholm, chasing after the perfect woman… I tell you it’s hard to keep up with him. He drinks like Keith Richards & Ron Wood together. Anyway, we always ended up with some women. And the quality of them wasn’t always high. It’s about that situation when you have a terrible hangover and you don’t know who’s beside you, and you have to be polite and make a conversation, even though you both know it’s not going to last. But after a couple of drinks you desperately start to call that woman again!?

“Balloon” was originally it was meant for “Company of Snakes”.  Bernie Marsden, Micky Moody and I wrote songs together in CoS. And that song was planned to be on the album after “Burst The Bubble”. But the band turned into “M3-Classic Whitesnake” and unfortunately M3 broke up before we had a chance to record a new album with original material. That’s a shame; it was a killer band…

Are there any plans for Revolution Road to perform live, especially here in the UK?

I would love to play in the UK again. I have some many great memories from England. It would be cool to also hook up with old my mates and fans from UK again, it’s been awhile. I guess we have to see how it goes with the sales and the interest from people. But it would be fun to do some shows with this project. Perhaps in Italy, Venice, Milano, would be cool places to go. So far the response has been very good.

I’ve heard rumours that Snakes In Paradise may be working on new material? Is there any truth to these stories?

We`ll see, never say never. SIP has taken a life of its own. We seem to be bigger now, then when we were together. Ha! It has turned into a cult. I guess a lot of the SIP songs stood the test of time. TJ & I still write together from time to time. But sometimes it’s hard for me to identify with music I wrote 20 years ago.

Besides Alessandro are there any other musicians or songwriters you would love to work with?

What are your plans now? Will you continue to create new music or do you plan to return to a quiet life outside of music?

Thanks for taking time to talk with Midlands Rocks, Stefan

Woody, thanks a lot for your questions. It’s nice to see that there seems to be quite a bit of interest in our music. Hope your readers like the Revolution Road album and I’m looking forward to see you somewhere along the road. Keep well!