In 2013, Poland’s Blaze of Perdition’s tour bus crashed, leaving vocalist Sonneillon and drummer Vizun seriously injured – the former temporarily in a coma – and taking the life of bassist Ikaroz, aka 23. Overcoming tragedy, the band returned to the studio to complete work on their magnificent third album, Near Death Revelations released on 26 June 2015. Here, Sonneillon talks with MR’s Jason Guest about the album, its themes and artwork, the band’s progress since their early days, and the meaning of music…

Thank you very much for taking time out for this interview and congratulations on Near Death Revelations. Before we begin, my condolences on the sad loss of 23 and I hope all is as well as it can be in the Blaze of Perdition camp.

Following the accident and the tragic loss of 23, was retiring the band considered? What was it that kept the band going?

Guys were probably thinking about that when we still weren’t sure if I can make it, but everything became clear later. I wanted to continue from the day one and here we are.

The album title is clearly a reference to the accident and its aftermath. Did the writing of the album help with dealing with the experience?

Yeah, it was a catharsis, to finish this album after everything that happened. I could collect all the feelings, thoughts and memories and make use of them while writing the lyrics. It was a very cleansing and refreshing experience.

What are the “revelations” referred to in the title?

To put it simple, they are the collection of reflections and thoughts on life and death after the events, and the word “revelations” has two meanings there. Bluntly speaking, it was used ironically, as I obviously didn’t have any great revelations to share with the world, but on the other hand it really has changed the way I look on some things in my life and surely made me more introspective & focused on my inner demons. So, ironically, it is a kind of my own small revelation whether I like it or not.

From what I’ve read elsewhere, most of the music was ready in 2013 but the album title and the lyrics were completed afterwards. Were there any significant changes made to the music to align it with the new ideas?

The song structures weren’t changed, but we added some more layers to them to outline the atmosphere even more.

What kind of progression does it mark for the band since 2011’s The Hierophant?

It’s hard to rate your own work, but if I can be any judge, I’d say the album is more consistent both musically and lyrically wise. It has very monolithic structure that wasn’t so uniformed on our previous album. It’s a long & more complex story where each chapter resonates with others, instead of just a couple of songs. 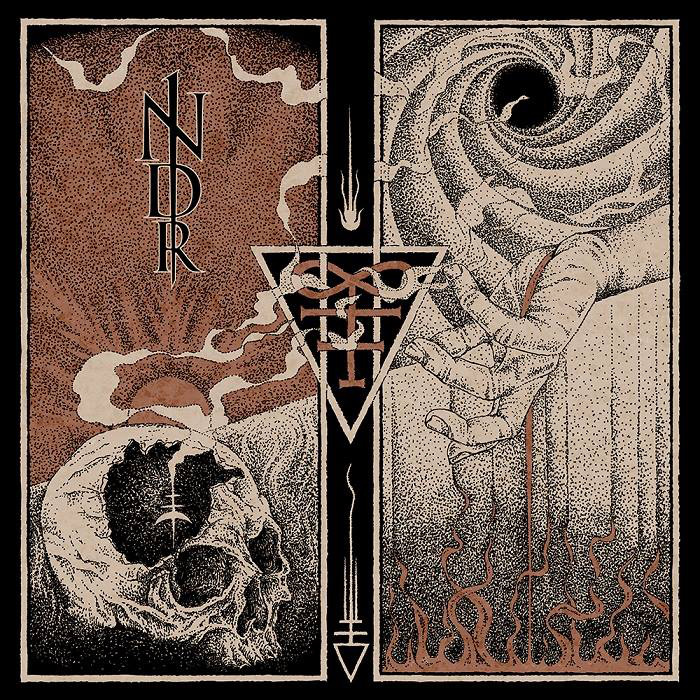 Can you tell us about the artwork and the symbolism within it and how it relates to the music?

I had no active impact on the form of the artwork. We’re friends with the artist behind it (Mentalporn) and he was with us on this unlucky trip to Austria, so I just provided him with lyrics so he could grasp the atmosphere and told him to draw, he knew what to do. The result is great, so I guess we’ll work with him again someday.

This is your first release through Agonia Records. Why did you choose to work with them for Near Death Revelations? And do you plan to stay with them for future releases?

Their offer was the best we had, so it was an easy choice. The deal was inked for two albums, so we’re not going anywhere else at the moment.

Near Death Revelations is set for a cassette and a vinyl release. Why have you chosen to release them in these formats?

As far as I know Agonia always releases both CD & LP editions. The MC was an idea of Krzysiek of Arachnophobia and we just agreed, we know each other very well, so there was no reason to refuse.

I wasn’t a part of Perdition, but I was more or less close to the band almost from day one. Beginnings were more spontaneous, raw and with less serious attitude, as they always are. The band has matured over time and become something more than just few guys making noise. That’s when the changes in line-up and the name became necessary and BoP was born.

Yes, as is any form of art. Everything that stimulates the mind enough and inspires to dig deeper in ourselves has the power to cross any borders of thoughts and beliefs.

What does the act of making music mean to Blaze of Perdition?

Any plans for shows, festival appearances or tours? And are we likely to see you in the UK?

We have some confirmed/planned shows in Poland and Germany. I don’t know about the UK, but we’re open for any good offers.

What would be the ideal setting for a Blaze of Perdition performance?

A small show for dedicated people, where we could prepare everything just as we would like to.

What does the future hold for Blaze of Perdition? Early days I know as the album is just about to be released but is there more music in the works?

We’re not writing any new music at the moment, but there’s one song left from NDR session, so I guess we’re release it someday, as a split maybe.

Thanks for the interview!