“…it’s the speech of Darkness”

Hi both. Thank you very much for taking time out for this interview and congratulations on Katabasis, a great album (reviewed here) and an excellent follow-up to Extinctionist.

Skyggen: Thanks for your words. When I read your review however, I’m just guessing that you probably need to spend some more time with Katabasis to get to the core of the album. Not to speak bad about Watain, but using Necromorbus Studio doesn’t make you a Watain-like band or Watain-clone or whatever. For some it does seem though, which is fucking boring. It’s nothing new that everyone is trying to compare things when it comes to music in general, but mentioned Swedish band seems to be way overused by reviewers these days. Each second black metal release “sounds like Watain”, or “this riff there was like Watain” and so on. But, well, maybe to them Watain are kind of originators of black metal, or perhaps one of those very few black metal bands they know after all which makes them a kind of point of reference… That might be a reasonable explanation, maybe. Nothing more to add in this case than good old “one man’s garbage is another man’s art”…

Jason: Well, that’s me told. So, does Katabasis mark a progression in any way for the band? Has the creative relationship between the band members evolved since Extinctionist?

Skyggen: Guessing that all those who listened to Extinctionist and will deign to spend some time with Katabasis will spot a huge progression since the debut quite easily. We went through fire and chaos with the band to reach the point where we’re now. It was quite a gloomy period in our existence, but a fruitful one. We surely learned how to express our emotions and ideas in a better and more emergent way. To me, Katabasis is like giving new birth to the band. It’s finally something that was really well thought out, well executed from beginning to the end, through the music, lyrics and the artwork.

Jason: When you were working on Katabasis, did you have an idea of how you wanted the album to sound or did that develop as you were writing for it?

Skyggen: I personally never plan in which direction the music will go when I compose it. It just happens, period. It has a lot to do with feelings, moods, experiences and everything that inspires me at the time. You’ve probably noticed that the music on Katabasis is pretty dark, filled with negative energies and currents and that’s what reflects my personality or artistic soul if you want to call it that way. To me an important part of this band is that it’s kind of a vent for my possessions and obsessions. It’s probably better way both for me and my environment that I manage to channel it through the medium which to me is Tortorum, than to spend time in prison, a mental institution, or some other place of such kind. At least for now…

Skyggen: Extinctionist was a more wilder and raw album I’d say, while Katabasis contains a way wider perspective of how our vision of this music actually is. It’s a way more spiritual, atmospheric, deeper and personal album than the debut was. As mentioned above, all these changes happened pretty naturally, it just had to be this way. I was working on the musical side of Katabasis with the new spirit named Specter, who joined us on guitar last year and who brought some fresh blood with him. It was quite important change when it comes to how the album came out. Barghest wrote the best possible lyrics/incantations and his vocal approach developed quite a lot since Extinctionist. His work is just tremendous on this album in my opinion.

Barghest: “Katabasis” is Greek for a descent or a down-going. During the Katabasis period a lot of images, words, voices, sounds, presences were made manifest to me. One of the words was “Katabasis” – a word that made its presence known to me quite early on in the album process. For me “Katabasis” means (and meant) ritual death, a descent into the abyss, transformation, a risk of life and the physical-mental body for the sake of otherworldly knowledge – the knowledge of the dead. At least for me…

Jason: Is there a lyrical or conceptual theme across the album?

Barghest: I guess this is more or less answered above. There is no “concept” here. The only theme is the theme of Katabasis, a relation of personal experiences and insights uncovered by the light of the abyss.

Jason: Where does lyrical inspiration come from?

Barghest: Inspiration comes from direct experience, dreams, states of possession; trying to put the word-less into words. Certain phrases used in the lyrics were dictated to me by….shall we say….demons, when in certain states of consciousness. And yes, I am deadly fucking serious.

Jason: Can you tell us about the artwork? What does it represent? And how does it relate to the music?

Barghest: Oh fuck, the album cover is filled with so much symbolism and meaning. I think this could turn into a separate essay in itself if I were to explain every aspect of the cover and what it means or refers to. Even if I started to explain just one symbol we would be here all day. I think if you read the lyrics, while studying the cover, and have some knowledge of ancient myth, esoteric cults, and occult philosophy you will find just how deep-running and profound the symbolism is, and maybe come to your own answers. But I refuse to give any clues here.

Jason: Who’s the artist? What was it about their work that drew you to him/her? And how much direction did you give the artist in its creation?

Skyggen: The one responsible for the brilliant artwork for Katabasis is a Slovak artist named David Glomba, probably better known as Teitan Arts. He previously worked for Cult Of Fire (reviewed here) and some others. I just got spell-bound when I saw some of his works, literally. We were discussing different options and considering different artists with our label and, eventually, we contacted David who said “yes”.

Another reason why we decided to ask him was that he isn’t too popular, at least not yet, haha. By saying “popular” I mean that he wasn’t working for each second or third band out there which happened to some artists and I think we ended up with something pretty unique. We, of course, explained him what we wanted to achieve and in which direction he should go, but he was kind of reading our minds and – in many cases – he basically came up with something what we exactly thought of or imagined. Or even beyond that. He’s responsible for all the graphics that you’ll find in the booklet for the album. He drew illustrations for each single song on the album too, illustrations that reflect the lyrical side of it to some degree. It’s amazing work, really. Wait and witness, especially on LP format.

Jason: For black metal bands, artistic expression is more important than commercial success. How important is this to music and black metal in particular?

Skyggen: You should probably add “for SOME black metal bands” to your question, but well, whatever. I basically don’t care about the scene or how the others look at this topic or what they think is right or wrong. I walk my path and I am true to myself and that’s what counts. To me black metal, or more particular THIS band, is something that represents and channels my views and my beliefs, it’s the speech of Darkness as I see it, it’s liberation and a tool that breaks the limits, rules and laws of this fucking rotten world.

Jason: Early days I know as Katabasis is yet to be released (release date is 8 March 2014), but are you working on more material for Tortorum? Do you have ideas ready or in development for future releases?

Skyggen: We actually are working on some new songs right now. We plan a special limited release later this year through an underground label of our brother Iscariah, Edged Circle Production. Our main label still remains WTC, but we just felt it was totally right to show the respect to Mr. Iscariah and support him by releasing something on his label. It’s going to be a different thing than Katabasis, but all those interested can check it out in due time. It is way too early to speak of next album yet. But the inspirations are out there, lurking in the shadow of the night…

Skyggen: None yet. We’ll see what happens when the new album is out and if any serious offers will pop up… To be a bit sarcastic I’ll refer to today’s scene by saying that we’re probably not lucky enough, or to say it better and more up-to-date, not hyped enough to hit the road and get on the bills of festivals yet, but keep your fingers crossed, hahaha…

Jason: Again, thank you very much for taking time out for this interview and congratulations on Katabasis. Do you have any closing words for our readers?

Skyggen: Thanks for the interview. May the Lightbearer show you the Path in the Darkness! 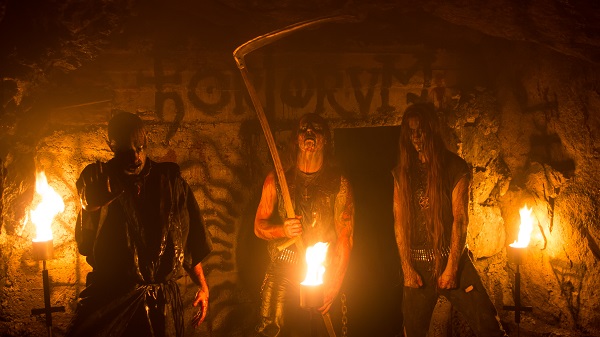