As we know from the ancients, sound is sacred, as is its expression…

Founded earlier this year, one-man Serbian symphonic occult death/doom project Temple of Gnosis released debut EP Mysterivm Magnvm through Goathorned Productions on 5 June. Here, mainman H.M.T. talks to MR’s Jason Guest about, amongst other topics, the band, his music, the Western esoteric tradition and transmutation of the spirit before leaving us with a poem…

Thank you very much for taking time out for this interview and congratulations on Mysterivm Magnvm. To begin, can you give us some background on Temple of Gnosis? What inspired you to create music under this name?

Temple Of Gnosis was created as vessel for the katharsis of being, which is needed in order to pass towards the unification with Self and Divine. I wanted to express this part of myself and to transfer my emotional, cognitive and spiritual state of meeting my own Shadow into the sound. As we know from the ancients, sound is sacred, as is its expression. Temple Of Gnosis is equally part of my own inner journey and an expression and “teaching” to the outer world in the form as you see it now.

Can you tell us about the EP title, its meaning and significance for the music on the EP?

The title is highly symbolic and has multiple interpretations. The rough translation of “Mysterivm Magnvm” from Latin is “The Great Secret” which represents the hidden journey through the dark which must be undertaken in order to reach the Light. This phrase was also used in alchemical and esoteric teachings, signifying something which needs to be obtained in order to complete the Work (e.g. find the Philosopher’s Stone) and this “something” is reserved only for the initiated. It is the great secret, but once you enter the right path there is no more mystery. The entire alchemical work itself was oftentimes called “The Great Secret”.

What did you want to achieve with the EP?

I wanted to present Temple Of Gnosis to the world and to promote the concept of Alchemical work, especially when it comes to its appliance to psychospiritual level. I also wanted to intrigue the audience with this kind of music and imagery to see how they will react. I make music for myself and to be honest, I didn’t know how the world would react on it. I also see this EP as an intro to the upcoming debut full-length.

I had an initial idea for the entire concept in my head (how it should sound, what should it be about, how it would look like) before I started to work on it. There was a grand plan and structure that came to me, but the creation of individual tracks went by flow and spontaneity.

Almost half a year, almost constantly. 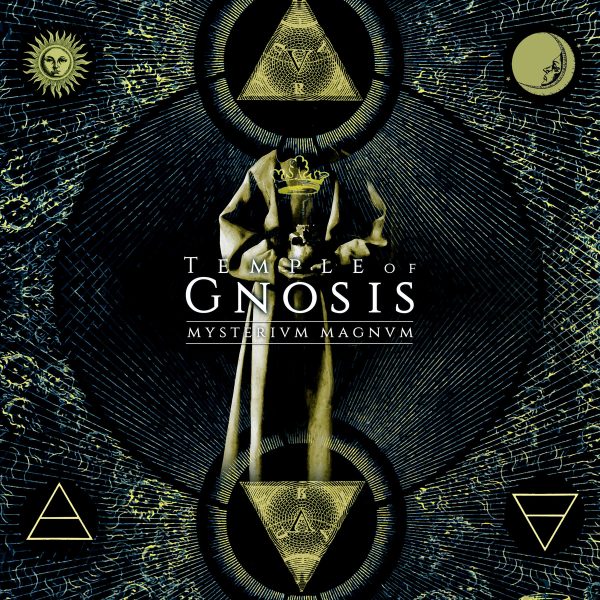 The artwork is very impressive. I take it you designed it yourself, yes? Can you tell us about the artwork and how it relates to the music?

Thank you. That’s right, I designed the artwork. The imagery is greatly based upon renaissance alchemical engravings, adapted to this “dark” style, my concept and way of expression. It symbolically represents the alchemical work (the Great Secret) and the process of deconstruction of the elements in order to form a new being. In the same time, the imagery is also set up as a kind of “puzzle” to visually represent one passage from the famous alchemical and esoteric book, written by the father of Alchemy. This passage is revealed on Temple Of Gnosis t-shirts (here).

How did you come to work with Goathorned Productions for the release of the EP? And do you plan to stay with them for future releases?

It’s an interesting story. The owner of Goathorned found some of Temple Of Gnosis material online and contacted me asking me to actually buy the CD if it’s available. In that time I reached a deal with another label for full-length, but I wanted to release an EP before that. What happened next is that I suggested to him that we release this EP now and we made a deal quickly. Goathorned are a great label, but as I said I already reached a deal with another label even before I got introduced with GHP, so now I can’t stay with them even if I wanted to.

How do you approach composition? Is it lyrics first, or the music or a melody perhaps?

Usually first it’s the melody that reaches my conscious from my subconscious, and after that come the lyrics. But sometimes I already have the title and concept in my head and i fit the music into that structure.

As we know from ancient teachings, God is an ultimate Creator, his main job was to create and maintain the creation (everything). So, music making, and being creative in general, is a sacred and divine act for me. It also helps me to express myself, and I really like the feeling you have when you make something special.

You describe your music as “alchemical, occult death / doom metal”. Can you elaborate on this?

This is only a rough description; I don’t like categories and labelling things, especially not with genre-labels. I actually can’t describe this music. I only put that because the project is completely new and people often don’t have the time to check out everything in detail before they have some idea what it might be. So when you write “occult doom metal” people who like doom metal in occult concept will check out your stuff.

The concept of the EP is inspired by the Western esoteric tradition and involves the transformation of mind and spirit through deconstruction of the old – “the original structure” – and building of the new – the “transmutation of the spirit” (forgive the crude paraphrasing; a much better explanation can be found here). What drew you to this tradition?

I was always interested in the areas of religious and philosophical studies, mysticism and esoteric traditions. What especially drew me to alchemy was its spiritual and psychological foundation. I was fascinated with the symbolism in medieval alchemical engravings. They all hide some secret which connects to the spiritual development of Man, and I started studying them in order to try to decipher the meaning.

Absolutely. In almost every spiritual tradition sound and music are sacred and are even considered a creative force of the universe, the medium through which the universe is created. When you think about it, music is a very weird phenomenon. There are some vibrations of the air and when they reach yourear- membrane magic happens. And you can transfer the entire worlds through these simple vibrations. That’s why I love it.

The occult and metal have become almost synonymous. Has it become cliché or is the occult still relevant?

I don’t want to judge others and I can’t speak in their name. Those that use occult in metal in order to look “evil” and in order to get some applause from whoever are free to continue doing it. But it’s true that now all of it may look to many as some cliché. Everything that is abused in some superficial purposes eventually becomes boring, but that doesn’t mean that the thing by itself loses its true meaning and power. If commercials start using Salvador Dali’s works massively and making money of it that doesn’t make Salvador Dali and his works cliché. Personally, I don’t care much what people think, I create what I like and what I feel like creating.

Symbols (images) are more ancient and much more complex way of communication than words. We as a species heavily used them in our pas and they are embedded in our subconscious. In the esoteric tradition, symbols are used to transfer some hidden message, which is encoded in such a way that everyone can see the symbol but only the initiated ones can know the true meaning. They hide great things in plain sight, and are thus very powerful. Unfortunately, today we have a situation where many sceptically ask, “this symbol obviously can be interpreted in a million ways, is there some meaning in it at all?” But this is only because nowadays there are many self-proclaimed “wisemen” who think they know what this or that symbol means, and they interpret them to the public. So we have multiple interpretations of one symbol, and this serves to make the symbols be taken less seriously and even as a joke or a game. As far as I’m concerned, ancient symbols hold great significance and every symbol is carefully thought and designed by someone to transmit one exact message and signify some specific thing.

I don’t think so; I’m not much interested in that.

What would be the ideal setting for a Temple of Gnosis performance?

Probably some kind of temple or church-like setting.

What does the future hold for Temple of Gnosis? Is there more material in the works?

How do you see your music developing in future?

There is no some special “plan” when it comes to music development of this project. I wanted to create something exactly like this and I made it happen. If I feel a need to change, add or shift, I will do it when the moment comes.

Thanks very much to you Jason and to the The Midlands Rocks for this opportunity to introduce the concept of Temple Of Gnosis to you and your readers. For the closing words I’d like to share this short poem:

“Search ye for the Black Dragon dwelling in the caves of your being.

Descend deep into the Unconscious and meet with the darkness of your Shadow.

There shall ye find your true Selves;

Then shall ye be liberated from your Selves.”

For more details on the band and to hear the music, follow these links: