I can maintain what I’ve learned, but you aren’t getting this voice without living a bit.

Scott Sorry’s musical career has been on an overall upward trajectory, albeit with a few blips, since he first appeared on the rock radar with US rockers Amen way back in 2003. Since then he’s been a Bride of Destruction (replacing Nikki Sixx), a Wildheart, and leader of Sorry And The Sinatras – what he regards as his first ‘proper’ solo record, ‘When We Were Kings’, was released last week via PledgeMusic (http://www.pledgemusic.com/projects/scottsorry).

Ian Savage caught up with him to talk about the new album, songwriting influences (or not) and growing up gracefully (or not)…

Ian: ‘When We Were Kings’ had an 11-month Pledge campaign and finally became available this week – how long has it been in the pipeline overall?

Scott: Well…the songs are based on riffs and lines that I’ve had stuck in my head or written down since I left active duty a few years back. After the last Wildhearts tour I did in 2014 I became reinvigorated and decided to finish all the ideas I’ve had, weed out the shit ones, and put a out a record. So all in all I’d say this has been in the works for about 2 or 3 years.

How did you find the Pledgemusic experience?

Tough. Pledge is great, I can’t express that enough, but for me it was tough. It’s just really hard for me to have an online presence. The past year, after I announced the pledge, has just been crazy – I can’t be online as much as I feel I should be for updates and stuff like that, y’know? I’ve got kids, a wife, work…my father was passing…tons of shit all seemed to happen at once and all of these things demanded my attention 100%. There was no break.

When I first signed on I was like “yeah, I’ve got 10 minutes a day to update people on my record”…nope. No I did not. So it was tough. Like people were trusting in me enough to pre-order my record and I was having a hard time even getting online to let them know how it was going. I just don’t have to have an online persona. So it was tough.

The project raised well over its target amount [414%] – what luxuries if any did that allow in the recording? 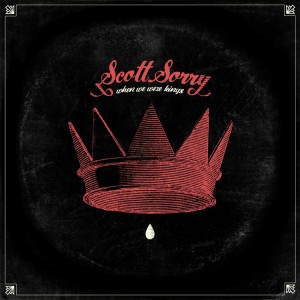 Studios who was INCREDIBLE to work with. My initial intention on this record was to just put out a good sounding punk record. Then a lot more people pledged than I had expected, so I used the extra money to make the record sound impressive.

I figured, this many people put their faith in me, I’m gonna do them right by making it sound massive. Jon took care of that. The record does sound incredible…the rest of the money that’s left over goes to Autism Speaks. So, so far, it’s been a win/win. If I can make records like this for a while I’ll be a happy man.

Where did you record and how was the process?

We recorded with Jonathan at Halo Studios in Windham, Maine and the experience was incredible. They really took care of us over there. It was one of the best times recording that I can remember. I was so used to recording on a substance…this one we did dry. Sober for every take, made all the difference. Jon even kind of acted as a life coach…we’d go to lunch and he’d say “you have this to do so eat this” or “stay away from this cause I need you to do this”…it was great.

We had a very small amount of time to make a killer record and he was very capable of getting us to give our best performances. I really have to give Jon and the band a lot of credit on this one. Every take the guys played their asses off, and Jon made every second sound incredible.

To my ears it’s a more accessible LP than Sorry And The Sinatras’ 2009 ‘Highball Roller’ (more like a heavier Gaslight Anthem than GBH, if you will) – is that down to the writing being solely your own rather than a band effort this time or something else?

Honestly, I’d say it’s down to age. I’m not where I was when I wrote Highball Roller – I’m a lot more focused, not as drug and booze fuelled. My life was a fucking disaster when I wrote Highball…holy shit, my nickname was “Scott Sorry Ruiner Of Lives”. For real. But I write what comes natural and I don’t force it. I write what I know and I keep it honest. If that made it more accessible than I couldn’t be happier, but I never sit down with accessibility as the intent. I just write.

Are there plans to tour the album at all?

At first there weren’t – we were just going to put a record out for the sake of putting a record out. However, it came out too good to ignore. I feel weird saying that, but we all feel the same way…it would be a shame if we didn’t play this one live. We have the songs and a killer band…so let’s fucking go for it. It’s the first time I’ve been excited about playing with a band in years. So yeah – we’re fucking touring.

Will the band be the same musicians as the record?

As long as law and luck are on our side, yes.

Who would you say are your main songwriting influences?

OH SHIT *laughs* I hate this question only because I can never pick a couple. My influences range from Quicksand to Sam Cooke…I take a lot of musical influence from Bob Mould…lyric influence from Jason Isbell and Steve Earle…I love the Bronx and Against Me…but I love Phillip Glass and Neko Case and  Wilco as well…so I have no idea. *laughs*

There’s this mash of a sound I hear in my head and what ever comes out just fucking comes out. I love music. I’ll listen to Black Flag and find the connection to Rocket From The Crypt and chase it back to Hall and Oats…so influences? Music. Best drug ever.

There’s a number of songs on WWWK that seem to be directed at a person or persons in particular; how much of your writing is rooted in real-life experience and how much is ‘fictionalised’ to a degree?

On WWWK just about every song is a letter to someone or a few people. I have one hell of a hectic life these days with more going on than I’d ever expected. I have too much going on to make up a fictionalised song, so basically, all of these songs are letters to others. The only song that’s even a metaphor is ‘End Of Summer’, that was a metaphor about the record itself.

What’s your starting point for lyrics? Can a song be built up from a single catchy hook or cool title, or do you tend to have something in mind to write about and power through?

I’ll come up with a guitar riff, I’ll make up a melody over that riff, I’ll start riffing over that melody until I find a phrase I can work off.

Like ‘When We Were Kings’ [title track of the new album] – I just started humming a melody, then lyrics started to form…so I get the line “when we were kings”, and at first I think it means one thing…then I’ll realise I was wrong and THIS is what the song is supposed to be about. Once I get to that point it’s easy, but every song takes time to mature. I’ve become so picky over lyrics. Every syllable, every line, every beat has to be perfect or fuck it, whats the point?

How does fronting your own band and being the creative lynchpin compare to being more of a sideman as in The Wildhearts and Amen?

Amen was a job. Plain and simple. The Wildhearts were different…I feel like I am to this day a Wildheart. They are my brothers and I was never treated like a “side guy”. I wrote a lot, I sang a lot…I was really accepted into a dysfunctional as fuck family. But the songs on this record…every lyric is personal. That’s the difference. I didn’t write it for any one else. And I couldn’t have anyone else sing these songs. So I guess the answer to your question is that it’s freeing as fuck. *laughs*

An alarming number of Wildhearts off-shoots are releasing solo albums around now, how likely are gigging hook-ups?

Eeehh…well…here’s the thing with that…I want to play and tour with other musicians. What is the point of touring with Wildhearts without being The Wildhearts? If Ginger or CJ are playing the same night I’m in a town, betcha life I’ll be at that gig…but I’ve already toured with the Wildhearts. I’m looking to tour with other bands and grow as an artist. I hope that makes sense?

How do you keep your voice in shape on tour? Most lead singers can’t carry off the kind of grit that’s in yours for a single session let alone night after night…

Once upon a time I’d say meth and cigarettes *laughs* These days…sit-ups, raw organic honey, and green tea. Sit-ups help your diaphragm which helps your air flow, honey helps your vocal chords, green tea for energy…but the one thing I have that trumps all of this is road-worn experience. My voice comes from years of couch surfing and rough living – I can maintain what I’ve learned, but you aren’t getting this voice without living a bit.

It’s obvious from lyrics and liner notes that your family are incredibly important to you – aside from them and music, what else do you make space in your life for?

Nothing really. My family is my world, my wife and kids are my best friends. I don’t go to bars anymore. I rarely meet friends for drinks…not because I don’t want to, but because I don’t have a sitter.

Before my wife and kids, I’ll be honest, I sucked. I took advantage of every situation I was put in. I really had to come to terms with the fact that I was a selfish prick. Now, I’m happy just staying home. So I have to be honest…the only thing I make time for anymore is my wife and kids.

Last question – let’s play ‘Desert Island Discs’. Five songs, one book and one ‘luxury’ item to last you indefinitely on a desert island…

The book I’d have on a desert island…I’d love to be poetic and say something like ‘Cash’ by Johnny Cash or ‘Hardcore Troubadour’ by Steve Earle ‘cos both of those books ground me.

But let’s be honest, if I’m stuck on a desert island, I’d take a Playboy and a guitar.  Let’s be real…