We are increasingly successful in being meaningless…

With their fourth album, Nocel, released in October 2014, bassist Sars of Polish black metal band Furia spoke to MR’s Jason Guest about the band’s progression, the new album and it’s themes, the artwork, lineup changes, and the prism of language…

Thanks for taking time out for this interview and congratulations on Nocel.

What was it that you wanted to achieve with Nocel? What kind of progression does it mark for the band?

We have no rational order on the horizon and eventually even those abstract goals are unclear to us. In short we work without purpose or meaning. We don’t treat music as a tool for inflating our egos and therefore we’re not interested in the typical goals of typical bands. Each new record is a step forward for the band, but we try to make at least one step to the side and three steps back. That was the case with Nocel. Progress is the nomenclature of boring reality.

We’ve worked less than a year. In Poland, we use a different calendar so it’s hard to determine such facts properly.

In fact we used both types of composing music. In the beginning there is the main idea, the vision that guides each song and represents 99% of its content. Then, during rehearsals, it turns out that some things can be done differently and finally we have 140%. This is beneficial because on the one hand arrangements of the songs are uniform and on the other hand, we can add a pinch of salt to improve overall impression. The matter of sound is however 100% clear to us – we do not want to sound like modern bands, it’s the sound of “Panzerfaust” that we’re willing to follow.

There’s the theme, some hidden agendas here and there but… let the music speak for itself.

The title is already dead Polish word that describes the condensation of unreality in reality. Nocel is a dense night in the woods. World is ruled by the sun but it’s the night when the most interesting things happen.

How did you approach composition for the album? Is there a process that Furia follows, such as lyrics first, then guitars, etc…?

We don’t compose music during rehearsals. Every time there’s one person (in most cases it’s Nihil) that brings up 99% of the track. Then we all together add some ideas and at the end we have above-mentioned 140%. It works better for the music, we don’t have to deal with conceptual trash. Music is usually the first – we use the words to emphasize the contents we’re not able to express with the music.

ArturRumiński joined the band in 2013. Why choose to work with him? And what has he brought to Furia?

Arthur Rumiński brought along a lot of reverb. We’ve probably decided to play with him because he is very different from us.

Can you tell us about the artwork and its relationship to the album? 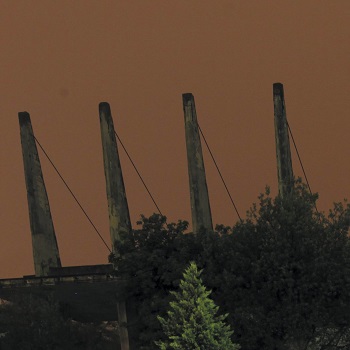 Artwork for Nocel, as in any other case, is the pictorial version of the music. It all fits together and works well – we do not see any other possibility. This all needs to be uniform even if we use the contrast. We attach a great importance to this.

Each of you has been or is in other bands. What does Furia offer that those bands perhaps didn’t or don’t?

Furia operates within the framework of mutual experiences, perceptions and reality, but ultimately, we’re not the same. The place for our other bands is where we differ.

We are all a bit taller. Some of us are thinner and some have put on weight since 2003. Generally speaking, many things have changed, we regret some of them but we are more precise in what we do right now. I’m not necessarily speaking about musical skills. We are increasingly successful in being meaningless.

There are countless black metal bands that write lyrics in English despite it not being their native language but all of Furia’s lyrics are in Polish. Why choose to write in your native tongue?

We think through the prism of that language and as a consequence we speak in it. It is quite simple and despite the fact that it is important for us, I wouldn’t look for any revelations. We simply choose what is natural for us.

What does the future hold for the band? Early days I know as the album has only recently been released but is there new material in the works?

We’re planning to record three materials this year, however, we had not decided yet when they would see the light of day. A lot of work is ahead of us so we’ll probably play no shows for 3/4 of this year (with one exceptional gig in Poland).

Any plans for shows or a tour in support of the album? Any plans to come to the UK?

Nocel promotional tour took place in November 2014 in Poland and it was fun. On the concerts in the UK, we’ve already talked to our compatriots in England, however, there are no details yet. We’ll probably arrive to you sooner or later.

I have nothing interesting to say, bye.