“Thither I go and none may lead.”

Jason: Thank you very much for taking time out for this interview and congratulations on Divination Labyrinths (reviewed here). To begin, can you tell us about the band name, what it means, and what it signifies for the band? 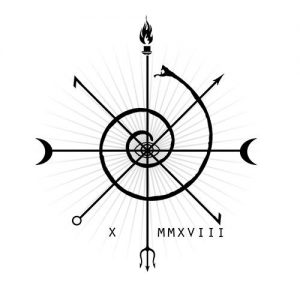 Sarpedon: Greetings! The name was chosen at the beginning because our lyrics dealt with the dark side of ancient Crete and the Minoan civilization (since I am from Crete and had a certain fascination with its history) and therefore we wanted something of exquisite uniqueness. The Taurus was used as a symbol mainly in Crete because of its strength and beauty so we thought it really suited our cause. It still does, even if our lyrics are touching more esoteric themes but it doesn’t matter because we see beyond mere words. I must denote here that for us it was never just music or copying other elder bands of the genre. As I look back now, our roots into Black metal’s general philosophy were deep and pretty serious from the very early stages: The path had to be made from us and not from others.

Jason: The band was started in 2007 by you and Sythanagon. How has it developed since then?

Sarpedon: Well, we still are the main driving force inside the Kult, and by that I mean that we have been continuously growing and touching deeper and deeper subjects and music from within ourselves. Every new member that enters our Kult understands that we take things with absolute seriousness and so he must contribute his fullest. So far the two new members (Hellscum and Bile) have been integrated really well and their offerings have strengthened us. But there are always more things to be tamed.

Jason: Is there a philosophy that underpins the band’s music?

Sarpedon: Of course there is! Otherwise we would have not chosen the black metal field. Since the beginning of the band we were restless explorers. Reading, travelling, examining, testing, practicing. Probably boring stuff to the majority of the modern world who can’t live without their iPhones for one hour but necessary if one seeks enlightenment. Those interested only on sitting in front of a screen in their lazy fat arse reproducing the nothingness of their lives on the net are part of a world that we have turned our backs to long time ago. Hunger for knowledge and inner growth has been our no.1 concern. The quest for excellence never ends, and he who thinks he knows enough shall die in the agony of stagnation! To sum it up, our philosophy takes form in our lyrics, imagery, live shows and spoken words. Our cause is of such great importance that it should not be manifested in limiting ways. That’s why we always try to exceed ourselves. For example, I cannot restrain myself only in vocals and lyrics but instead I extend the expression of my inner flame to visual creations (handmade and digital) too! Same goes for other members within the Kult. Attainment through sacrifice! We shall return to where we have emerged from, in triumph!

Sarpedon: Musically we could be influenced by many things that carry the spirit and essence of their creator be it metal, classical, ambient, progressive rock etc. But in the end it is our very own essence that we try to extract into sound. Our creative process involves many things that are not be shared in public.

Sarpedon: Divination Labyrinths had been in the making for quite some time so yes from one point of view you could say that it developed as we were writing for it. Then again, from the first songs of the album we realised it is some weird material and it might need some weird sound.

Sarpedon: Sinister spirituality reigns supreme in our lyrics. It comes from worlds beyond worlds to poison the material illusions and to strengthen those who follow the Luciferian paradigm.

Sarpedon: Divination cannot come unless you destroy all limiting illusions. The process of transformation is indeed of labyrinthian nature and those unworthy might get lost and never escape! It fits the music perfectly considering it’s chaotic structure in terms of song-writing and various emotions that accompanies it.

Jason: Can you tell us about the two-part track, ‘Tree of Gifts’? What inspired this approach and how did it evolve?

Sarpedon: It is a wordplay between the Qabalistic Tree of life and the Tree of knowledge. The first part with the subtitle ‘VOID’ is basically a personal interpretation of how the tree can correspond with one’s personal liberation, since we are dwellers of the void and thus it begins with “The seed was planted in ruins”. Man’s greatest fear is death, but in a way death is the motive from which the search begins. “You stand on skulls, you lust for life but this tree offers not!” The second part ‘Death’ is an instrumental trip that signifies the end and eventually rebirth, after you have attained the answers. This was perfectly manifested in visual form on the front cover of Divination Labyrinths, created by our second guitarist Bile.

Jason: The album features some very effective use of electronics. What inspired you to take this approach? Was it something you had planned before you started writing and recording for the album?

Sarpedon: Yes, we had discussed that the nature of the album did need some samples although we were sceptical about the amount since we did not want excessive use of electronics in any way. But Vicotnik proposed that we should let him handle them based on his feeling on our music and I think it turned out great! The more you listen to it the more you discover.

Jason: The album was mixed and masterd by Vicotnik of Dodheimsgard. How and why did you choose to work with him for Divination Labyrinths?

Sarpedon: Based on what I said earlier about our material, we wanted someone who could give it an identical sound. We all are big fans of his work with Dodheimsgard so it wasn’t hard to decide and sent him an email. We had huge conversations with him analysing every detail on where we wanted to go with it, our musical tastes and our hopes for the final outcome. This might sound strange but during the production process we felt that he was an actual member of the band. He blended himself perfectly inside our music and it is pretty obvious.

Jason: Divination Labyrinths is your first release through a record label. How and why did you choose to work with Forever Plagued Records?

Sarpedon: Forever Plagued Records was among the first serious BM labels that showed interest in releasing Divination Labyrinths. We came to an agreement and since then they have been very supportive to our vision.

Jason: You’ve just announced a split release with Erevos Aenaon entitled Born of Fire, Forged by Death. Why did you choose to release split with this band?

Sarpedon: We come from the same city and we have known them for many years. They are one of the few dedicated old black metal acts in northern Greece with whom we’ve shared many experiences since our first days as Kult Of Taurus that created a very special bond. This split is of great importance to us, since it contains some of our first songs re-recorded while Erevos Aenaon are making their first official presence.

Jason: What tracks will you be including on the split?

Sarpedon: ‘Blackened Skies’ (1st demo), ‘Traitor’ (2nd demo), ‘Reformation Of Evil Spirits’ and ‘Ending The Chapter Of Humanity’ (split). We chose those particular songs because we thought they had potential and we re-shaped them, giving them at the same time the sound we wanted them to have back in those days.

Jason: What does the future hold for Kult of Taurus? Is there more material in the works?

Sarpedon: We have been working on our second full-length and this year shall be offered to that task.

Sarpedon: No we don’t; we are very selective as far as performing live shows inside Greece. If anything comes up concerning UK, we’ll let you know.

Sarpedon: Thank you for giving us the chance to spread our word. At this point I would like to quote Austin Osman Spare: “Thither I go and none may lead.”