A deeply esoteric process of giving birth to a new artform…

Released on 27 February 2015 through World Terror Committee (Website; Facebook), Devathorn’s new album Vritra (reviewed here) is much more than its component parts. Here, Saevus Helcath gives MR’s Jason Guest an insight into the new album, its creation and the contributions of numerous members of the underworld, the band and its development, the relationship between creativity, music and spiritual liberation, and how marital problems and fashion shows should never be part of black metal…

Thanks for taking time out for this interview and congratulations on Vritra, a phenomenal album.

Hails. Thank you for your great words and the excellent review on Vritra.

Other than the two splits released in 2010 and 2013, it’s been eight years since your debut album, Diadema. How has the band developed in that time?

The past years have been full of creation and evolution for Devathorn, a process that granted us experience in many levels, musically and spiritually. The second full length opus of Devathorn contains the evolved and evolving aspects of the band, the raging elements that led to the manifestation of the Opus.

Our main goal was to be absolutely free to let our Inner Flame be channelled into the result. It was a very demanding task, to materialize the initial Vision of Vritra. The goal is always to evolve and progress, avoiding stagnation and repetition. On this occasion, we strived not only to achieve progress, but create a unique album bearing the characteristics of Devathorn within.

The work on the album practically began in 2012, while the material of the composition was gathered a while ago. The urge of manifesting Vritra though was very strong since the earlier years, the ember that became the fire of inspiration. We had numerous ideas and concepts on the album, and when the time was right, we proceeded on giving them form.

How did you approach composition for Vritra? Did you have an idea of what you wanted it to sound like or did you take a more organic approach? 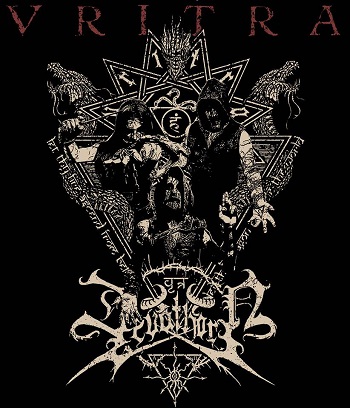 The process is completely improvising. Every song began as a vibration, emerged as an idea or a concept. We do not force anything to create music; we compose completely unbound by any standards. This is the main factor of creation for Devathorn, this very process of combining diverse elements into a result that still breaths our influences, experience and background.

The album title, Vritra, is the name of the mighty Asura Dragon, an adversarial archetype of a Serpent God opposed to the divine order. Within the archetype of Vritra we explored and revealed all the philosophical values and axioms that our perspectives and Paths represent. It became the symbol and symbolism of the album, enriching the result with His aura.

The album draws on numerous mythologies and religions for its symbolism – Qliphothic, that of the Old Testament, Greek and Egyptian mythology, Mesopotamian and Vedic religion, and Satanism. That’s a diverse list of sources. How have they informed the album?

We do not regard any spiritual or religious system as diverse, by the total meaning of the word. Western religions derived after a huge influence from the East, and the eastern esotericism evolved more and more within the Western intellect. Every system has its value, a vast amount of mythological sources and anthropological references that build their whole. We ignore organized religions and their dogmas though, since they have been constructed to serve social manipulation purposes. As for Vritra‘s references, we explored the qualities that the symbol represents in many systems, and constructed strong symbolizations to let the listener unlock them. The Qliphothic King becomes a sign of spiritual liberation, a Dragon that brings forth the treasures of Knowledge, through numerous avatars and forms.

What do you find in these sources? And how does it manifest itself in your compositions?

We explore and invoke the aspects of the Dragon through numerous entities, qualities, philosophical concepts, religion doctrines and mythological figures, striving to reveal his marks. It is not a plain mythological reference of the Hinduistic tradition that is shown, but a powerful spiritual symbolism of Knowledge, Chaos and Liberation. The Serpent of The Desert, as the Asura Dragon Vritra is pictured, embodies the fury of Leviathan, the liberating spirit of Prometheus, and the majesty of Set-Sutekh the King. He is the dreaming Dragon Tiamat, Typhon the Destroyer, and Lucifer, the great Adversary. The powerful rebellious force that revokes the dogmas of divine order to reveal the path of spiritual ascension. Those axioms reflect within the Opus, planting seeds within the listener, to explore and reveal.

You’ve re-recorded three of the four tracks from your 2010 and 2013 splits. Why choose to include these tracks?

Each track of Devathorn is not just a musical result but a step on our Path, reflecting very important values for the Circle. The re-recording of those tracks held very severe purposes, since their concepts were very important to complete Vritra. Practically, we could have released a full album without any re-recording, but instead, we have chosen to given those particular rites a new form, and let them manifest their Draconian aspects.

The album features members of Acherontas, Temple of Baal, Serpent Noir, Monk Adramelekh, Temple of Algolagnia Chthonian Alchemy, and Mother of Millions. Why these musicians?

We are proud to have had those individuals granting their poisonous aura to the Opus. Acherontas V.Priest of Acherontas on serpental chants and summerian astral mantras, Amduscias of Temple of Baal on lead guitar evocations, Chiva of Serpent Noir and Monk Adramelekh on Draconian invocating chants, Temple of Algolagnia on vibrating ambient tracks, Denwar of Chthonian Alchemy on Promethean choir and K.K. of Mother of Millions on lucid acoustic pulses. Each one of them has a special connection to the Circle of Devathorn, and brought their fiery elements to the creation of the album

What did they bring to the album? And was the music written with them in mind?

Their participation was very important, as they elevated their parts to a powerful result. Many of their parts were composed with them in mind indeed, and their parts hold a very strong significance to their personal values.

The artwork for the album, like the music, is very striking. Can you tell us about the design, what it represents, and how it relates to the music?

The design represents the values of the Dragon and his numerous aspects within our perspective. We would like to let the symbolism and details remain hidden, so the listener can delve deep into the artwork and regain the hidden messages. 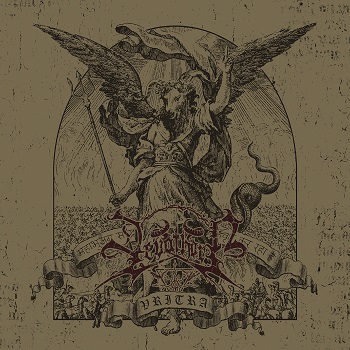 The cover artwork and layout was envisioned by D.R. and Holy Poison Design. Why did you choose to work them? And how much direction was given in its design?

Daniel Rosten, which is the murderous throat of Marduk and Funeral Mist mastermind (as Mortuus and Arioch, respectively) is a person of great value and respect for Devathorn. His art and music has carved our view in black metal deeply. It was very important for the Circle to let his very powerful connection grow into a tremendous artwork. Little directions were given, as D. needs no recommendations on how to manifest pure darkness. We were just amazed and enthusiasted to see the final result.

A lot of progress has occurred; progress in every level. Devathorn consists of an entity that has grown out of our aura and energy, and brings forth our experience. We become more and more experienced through this process and evolve.

Artistic expression is clearly more important to you than commercial success. How important is this to music?

For us, it is the main task of our Art. Commercial success is just a mundane goal, an ephemeral purpose that fades after some time. Honest expression is an obligation to the serious artist, otherwise he resembles a chimp that dances to what his viewers want to see (and listen) just to gain attention.

What does the act of creating and performing music mean to Devathorn?

It is the utmost channelling of our Inner Flame, the materialization of our perspectives and views. A deeply esoteric process of giving birth to a new artform through expressing the Inner Self.

Black metal is the route, the channel that we have chosen to express our Vision though. Its values and unbound, unchained artistic expression became our field and obsession since the early years, and stills remains.

Times change. Every period had their aura, and it is romantic to believe that the glorious days of the 90s will ever return. It is true that there is a lot of degradation within the scene, with most of the old and newer bands acting dull and idiotic for cash and attention. But we just ignore them; there will always be devoted bands and individuals to the true black metal spirit, delivering masterpieces to the audience.

I can’t really understand what we set as intellectual black metal. Because, most of the intellectual bands were hipsters that wanted to sound like Fates Warning playing Mayhem riffs, being extreme but not so dirty, trying to rationalize black metal to prove that black metallers are not all murderous Satanists and wild-savages. Ridiculous. Black metal should be extreme, with teeth and fangs, bearing values and axioms that the normal mindset would not tolerate. Within the most extreme bands I have met the most intellectual individuals, but still not trying to persuade their audience of how not-dangerous they are, and be accepted; rather they delivered some of the milestones of darkness in the genre. Otherwise we would all end up singing about socially accepted and understood thematology, about marital problems and fashion shows.

The new album will be supported and spread with several live shows. We are very selective regarding the shows we participate in, as we regard each Devathorn live rite a special occasion. It would be great to visit UK given the chance; we have got very strong feedback.

What would be the ideal setting for a Devathorn performance?

As stated before, every live emanation of Devathorn is a unique channeling of our Inner Flame. The ideal setting would be a manifestation of Vritra upon a stage filled with banners with special designed sigils and Art to represent His forms and avatars, and musk incense burning, creating a multidimensional experience of raging black metal Serpental chaos.

The circle has already begun working on new material, the next manifestation we soon emerge. More details will be revealed when the time is right.

Thank you for this very interesting review on Midlands Rocks. The new Opus bearing the name of Vritra is out now via World Terror Committee. The release will be followed by a royal DLP vinyl edition and tape. Open your Hearts for the Suphur Dragon and Chant His names in Madness Divine. Salve Ars Sinistra, Ars Gratia Draconis! 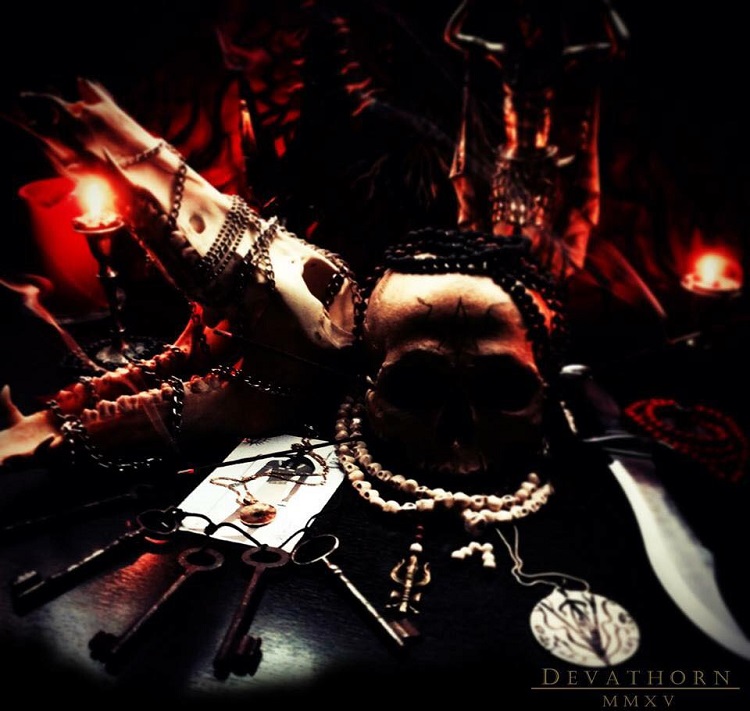