Texas’s Ryan Hamilton released his first album with his UK-based band The Traitors to great acclaim last month (MR’s review is here). They cross the Atlantic for live dates supporting it next month; MR’s Ian Savage bent the frontman’s ear via the internet to discuss the past, present and future…

Alright, to start off: you first caught peoples’ ears about a decade ago in Smile Smile, a pretty indie/folk/acoustic-ish outfit – can you give us a potted history of that?

I am forever grateful to Smile Smile. NO WAY I’d be here now if it wasn’t for the success of that band. It was a difficult band to be in. Rewarding, but difficult. Here’s the short version: I was in that band with my fiancé. She cheated on me very publicly, and we broke up. But we stayed in the band together, and I wrote a bunch of songs about how she cheated on me. Those songs became an album called Truth On Tape. So, we would tour, and play these songs about this terrible experience we had just been through. Sometimes we wouldn’t even make it to the end of the show.

In the last few years of Smile Smile you also hooked up with Jaret Reddick to do People On Vacation – a slightly more rocky, ‘big-chorus’ kind of band. Was that something you were always leaning towards?

No. I’ve always preferred more classic sounds. But when Jaret asked me if I wanted to write some songs together, it provided the opportunity to try some new things. People On Vacation went to shit in the worst possible way. But it ultimately made me a much better songwriter. For that, I am thankful.

From a bit of internet research, the reasons for POV coming to an end in 2013 aren’t public knowledge – care to share anything, or is it a closed chapter for you?

The thing with that is, people think they know. But I’m yet to hear anyone get it right. It’s all gossip and bullshit. I’ve been purposely vague about it all. Even though I admittedly let my emotions boil over every once in a while, I’ve never said anything I didn’t mean. But I can’t expect people to understand where I’m coming from if they don’t know what really happened to me and my bandmates (Mickey & Rob). It’s been VERY frustrating. Hell, Chris Burney (BFS) even took to Facebook to publicly call me a “worthless piece of shit, and a coward” and then invite everyone to join him in bullying me and saying terrible things about me. All based on the lies of someone else trying to cover their own ass. It was terrible, but ultimately really embarrassing for him. The negative comments on his post were overshadowed by an outpouring of wonderful messages and support from people who know better. It’s the price you pay for taking the high road, I guess. But sometimes it’s REALLY HARD not to blow the top off the whole thing and tell people the truth.

So most of Smile Smile and People on Vacation’s tunes were apparently collaborative writing efforts, while your solo material is, well, solo – do you find it easier to write alone or with other people?

I actually prefer to write on my own. But I am very thankful for the things I learned while I was writing tunes in Smile Smile and POV.

Your 2015 debut solo album [Hell Of A Day] was another step away from acoustic indie/folk stuff and towards electrified classic rock ’n’ roll (even explicitly name checking Tom Petty and The Rolling Stones) – how did that one come about?

That was more of an experiment than anything. I was trying to figure out what I was going to do after leaving POV, and I really wanted to make a solo album. I’m super proud of that album, and it led to SO MANY great opportunities. But when I listen to it, It’s clear to me that I was still trying to figure out how I was going to (or wanted to) sound.

You seem to have found better pickings in the UK than in the States over the last few years, certainly in terms of touring – what are the differences between the two countries for a musician?

Yeah, the UK has really taken a liking to me and the guys. I think people forget that the rest of our band is actually FROM (and lives in) the UK. Haha. I think the main difference I’ve noticed is, people in England get more excited about going out to shows… where as Americans love to be at home.

As you mentioned, you’ve picked up your backing band from the UK too [The Traitors are comprised of drummer Mickey Richards, of Love/Hate and Snuff Znuff and Rob Lane, ex-Teenage Casket Company] – how did that happen?

We were in POV together!

Is it difficult in terms of logistics to run a band across the Atlantic?

Sometimes. But the magic of the internet makes it work.

Is this the first time you’ve had an actual band as opposed to a couple of ‘core’ guys plus drummer and bassist?

Yes! I love it SO MUCH. I think bands should feel like a brotherhood, or a family, or a gang (in a good way). This band feels like that.

Also, ‘…and The Traitors’ is one of the best backing band names since ‘The E Street Band’ or ‘The Heartbreakers’, who came up with it? I’m sure I remember Rob throwing something out on Facebook a year or so ago…

Yeah, Mickey and Rob had used the name before when they backed up some other guy on a tour. So the name was there to use. THEN, the new Star Wars movie came out. We all LOVE Star Wars. The “Traitor” thing really rang true. On several levels.

So coming up to present day – how did the new album [Devil’s In The Detail] come to fruition?

We funded it via PledgeMusic. Had a really successful campaign. I wanted to go record in the middle of nowhere in Scotland, and we dd just that. I think we accurately captured the sound and vibe of this band. Dave Draper did such an amazing job producing the new album. It’s on it’s way to be the most successful thing any of us has ever done. Feels amazing.

It seems pretty autobiographical lyrically, how far back do the songs on there go?

It absolutely is. The songs are a direct reflection of the past few years. All the shit that went down in the POV aftermath etc…the struggles, and the hope that comes from believing in yourself, working hard, and seeing results. I think the album feels hopeful. I like that.

I’m always intrigued by how the crowd-funding model works for people in a port-record-label age, how did it go for you?

And the uncrowned rock king of PledgeMusic [Ginger Wildheart] made an appearance on guitar, apparently?

Not just an appearance! He’s all over the album! Lead guitar, backing vocals etc…I love that dude. Look up to him so much.

You also collaborated with Ginger and Givvi Flynn on a charity single last year? (listen here)

Yep! Super proud of that tune. Not just because it sounds killer, but because of all the good we’ve done for mental health awareness and suicide prevention.

You’ve done very well from apparently pretty simple videos since Smile Smile (from ‘Topic’ through ‘Karaoke With No Crowd’ to current single ‘We Never Should Have Moved To LA) – how do you make videos work on a budget?

You just gotta have the drive to put something together that works… with NO MONEY *laughs* …sometimes I wish we had more money for better videos. But I think we do pretty good with what we’ve got.

Standard ‘towards-end-of-interview’ question – what’re Ryan Hamilton And The Traitors up to next?

Touring… LOTS of touring. Oh! … and Traitors Club. It’s my new favorite thing. It’s like an old school fan club. Exclusive music and other fun stuff. You gotta check it out here.

As a Midlands-based website, we have to highlight the Birmingham and Nottingham shows on August 22nd and 23rd – have you played there before?

Yep! Mickey and Rob are from that neck of the woods. Those shows are always extra good.

And a final couple, just for you – what historical person (real or fictional) do you most identify with?

Annnnnd….if you could play any character in film yourself, who would it be?

Ryan Hamilton And The Traitors’ debut ‘Devil’s In The Detail’ is available now, and the band are touring the UK in August… 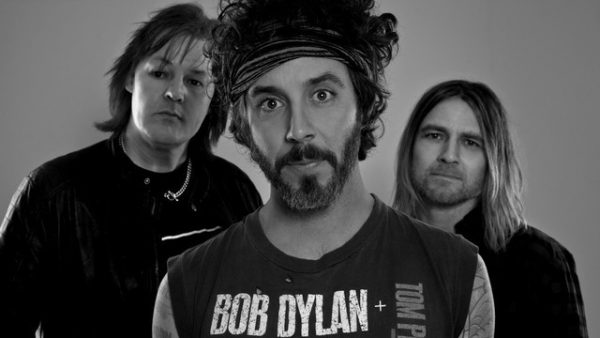