With new album Velua released 20 March 2015 through Napalm Records, Heidevolk proved that the numerous challenges that the recent line-up changes have brought to the band were not going to put a stop to the band and its music. Here, bassist Rowan Roodbaert talks to MR’s Paul Castles about The Veluwe – the mythical and utterly beautiful woodlands in the Netherlands – that inspired the album, its progress and development, touring in support of the album, as well as Pagan philosophy, and of course, ale!

Hi Rowan. Thanks for taking time out for this interview and congratulations on Velua. The mythical and beautiful woodlands in Holland known as The Veluwe form the backdrop to your new album. What can you tell us about this place?

The Veluwe is a big slice of nature in the Netherlands. It has got woodlands, heathlands, sandy planes and a lot of wildlife. As you might know the Netherlands is quite small and mankind tends to build a lot without any regards to nature. So this relative large piece of nature is quite unique. But it is not only unique for its place in the Netherlands. There are a lot of legends and myths connected to this place; stories about weird happenings, horrible fates and strange creatures that come to life in cold moonlight. Stories like ‘Herboren in Vlammen’ about Gerrit, a man that commits a terrible crime. As punishment Gerrit will never find piece in death but he ignites in flames every night and runs across the heathlands. A story about Urth, one of the fates (Norns) that weaves the threads of life and decides our fate. And of course the deceiving ‘will ‘o wisps’ that lure weary travellers to the swamps where they drown and ignite a light of their own. These and other great stories, as well as early pagan traditions and the everlasting beauty of nature, form the main inspiration for Velua. 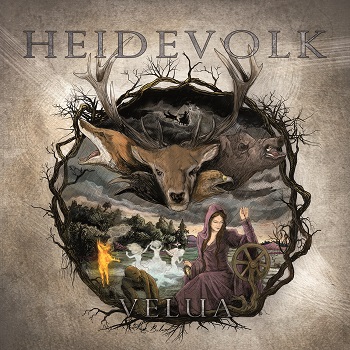 Could you explain something about the goals and aspirations of the band when starting to work on this new record?

After our previous album Batavi and the tours that followed we had to regroup and rethink what Heidevolk was about. Because just before Batavi (2012), Sebas left the band and after the North American (2013) tour Joris left the band. Both were founding members. We took in Kevin and Lars as new members and we had to gain stability as a band to find out what would be our course. That is why it took us 3 years instead of the usual 2 years. With Velua we set out to make a record that would represent Heidevolk in 2015.

We found out almost immediately that we didn’t lose our Heidevolk sound and that we all wanted the same thing: To create a piece of music that sounds organic yet would stick but not bore, something you can listen to over and over again. Atmospherically it had to be a soundtrack that would accompany you on a journey through the mythical forests and heathlands. So we had to balance and fit music and lyrics together to tell the story. This way the listener will have the experience that we’ve envisioned… even if your Dutch sucks, hahaha!

Since you finished work on the record two band members have left, Reamon (guitars) and Mark (vocals). Why was this and how big a blow was it to the rest of the group?

Well, as always there are several reasons. One of the main reasons is that playing in a metal band is hard to combine with a full-time day-job. Reamon (guitar) couldn’t come on tour with us because of his job for several years now but he was an active member nonetheless. Over the last year he felt that he couldn’t put his heart for the full 100% in the band anymore, and that was his own cue to leave the band. Mark (vox) got offered a full-time job that didn’t allow him much time for the band or to go on tour. He decided it was time to work on his personal life so he accepted it. It was hard for both of them and us, but we accept their decisions and wish them all the best. Losing two members is a hard blow but we saw it coming and we already did a tour with 2 session musicians (Paganfest 2015). We will do all the other shows this year with these sessions members too, including our just announced North American tour.

Losing your singer in particular is significant for a band. Would it have been better had Mark left before the new album was recorded?

Personally I don’t think there is any good or bad time to lose a band-member. If he left before the album we might not have released this album before the summer because we had to find another singer. The best timing is his own timing. If he cannot fully commit to the band then it is time to leave and that is what he did. Luckily we found Jacco, a great session vocalist to replace him live. I think consistency is key here. We’ve only just started promoting Velua and we are booking a lot of shows right now.

I understand two artists, Jacco and Kevin will step in to help you on the USA tour in September. Are they likely to become permanent members of Heidevolk and who will replace Mark on vocals?

Both Jacco and Kevin have been on tour with us this spring and will be touring with us throughout 2015. Jacco will replace Mark on vox for this year and he is doing an excellent job. We’re not deciding yet who will become a permanent member. We are looking to build a steady line-up for the years to come so we cannot choose a new member overnight. We have to be absolute certain that everyone has the same goals and wants to achieve the same thing with Heidevolk.

Are there plans to promote the album in Europe and will it include UK dates?

Right now we’re booking European festivals, there are about 7 confirmed festivals already – Graspop (Belgium), Summer-Breeze (Germany) and more. We are also booking (headlining) shows in Europe for October/November. We might hit the UK somewhere at the end of October or early November!

How strong is the pagan philosophy in Heidevolk? Is it an area the band explores in great depth?

Paganism is an interesting topic. Although Pagan itself is just a word to state that you have another faith than one of the ‘big three’. In our case it is mostly the Germanic approach. As any archaic belief it often stands close to nature, the year cycles and everyday happenings. It is very recognizable and there are a lot of very ‘human’ interpretations to life. It is not that we are Asatru but we like to explore the old ways. Sometimes it is just great to take step back from life and instead of browsing the internet for entertainment one can delve into the past. Search for interesting places and traditions in your own region. You’ll be amazed how many valuable pieces of history and older traditions you will find. Read it, visit the historical sights, or just look around you, there are a lot of ‘artefacts’ in plain sight. The world gets more interesting and you’ll be less bored if you are aware of these things. Then there are the amazing stories about gods, giants, goblins, etcetera.

Could you suggest a book, film or place that someone eager to explore paganism might find as a useful starting point?

Well, like I said. You might as well start in your backyard, your local library or a good search online. If you want to read more about the classic Germanic mythology you can of course go ahead and buy an Edda or the Prose Edda.

You look like the kind of guys who enjoy a good feast with lots of ale. Is that the case?

Do we? Hahaha yes of course. Heidevolk is not a job, it is a big (time intensive) hobby and when we are together, well… drinks are drunk. We like to have a good drink with anyone who is in for party!

It’s been a momentous time for Heidevolk with band members leaving and a new album on the way. Is the future still a bright one and do you all approach it with enthusiasm?

Most definitely. Heidevolk was prepared, we already did a tour with two session members, we’ve made an album that got amazing comments and we’ve only just begun promoting it. There is so much more ahead, both touring and recording. In fact we are writing new songs as we speak.

Thank you Paul! For the readers of Midland Rocks: if you haven’t had the chance to listen to Velua (or Heidevolk). Give it a try and let us know what you think. We hope to see you all soon at one of our shows! 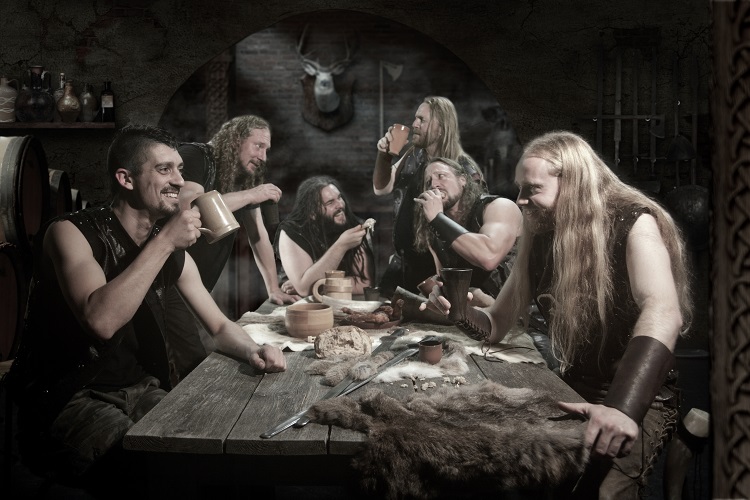