The whole climate of the music industry had changed dramatically. It’s changing by the second it seems… Over the years recording budgets got lower and lower and the quality of the recording output is diminishing as well in my opinion. [but] there’s still some amazing stuff coming out. 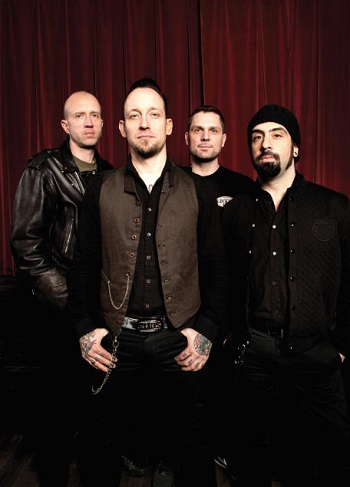 Raymond: Volbeat’s UK-tour starts in Birmingham, the home of British metal. Are you excited?

Rob Caggiano: Certainly, I’ve played in Birmingham many times with Anthrax. I love the UK in general. Every time we’re out here I’m having a great time and the shows are always killer. This is my first tour with Volbeat in the UK, so I’m very much looking forward to it. I also played Download with Volbeat this year, but this is my first actual tour with the band in the UK.

Raymond: Let’s talk Outlaw Gentlemen & Shady Ladies for a bit (Ed: MR’s review is here). How does your style of guitar playing and your creativity lock in with the rest of the band?

Rob Caggiano: For one, I do have my own specific style of playing and I do the things I do. One thing I’m really proud of with the new record is that people that are already familiar with my playing that they can hear some different sides of my playing and my musicality. When the other guys asked me to be the new guitar player, I was really blown away by it. I really pushed myself to be as creative as possible. There were no rules and no limits of things we were trying. We were just having fun. There are so many cool textures and overdubs on there. There’s so much guitar on the record. What I bring to the table complements what they already had going on in a very organic way as far as the Volbeat sound goes and vice versa. It’s killer.

Raymond: So how did you end up from being a producer to actually becoming a full time band member?

Rob Caggiano: The funny thing is that Michael (Poulsen) and I ended up collaborating on three or four songs. It set the tone for all the rest of the stuff. We really clicked on a creative level and we just had fun. We were bouncing ideas back and forth and those songs turned out really good. That was the trigger for the rest of the guys to ask me to join Volbeat.

Rob Caggiano: You know, being on the road and playing these new songs the more you get comfortable with them. There are some guitar riffs here and that we’ve modified slightly, because with Michael singing and playing some bits may turn his vocal off, because of a brain twist you know. I really don’t want to change things really. What we’re playing is pretty much on the record.

Raymond: Some longtime Volbeat fans think the new album is a little too radio-friendly at times. What are your thoughts on their criticism?

Rob Caggiano: I don’t really agree on that. Volbeat isn’t the type of band that writes specific hit songs that are consciously tailor-made for radio. No one in the band thinks like that. Michael doesn’t and neither do I; nor does the rest of the band. Volbeat is the kind of band that worked really hard to develop their sound over the years. The band does what it does, you know. The fact that fans connect with the music and the shows are packed every night is a reassurance  that we’re on the right path. We’re still having fun and we enjoy what we’re doing. As for the people that say that we’ve become too radio friendly, do they listen to songs like ‘Doc Holliday’ and ‘Dead But Rising’? Those are some of the heaviest songs the band has ever written. If anything, this record is the most diverse Volbeat album the band has ever made. There’s literally something for everybody.

Raymond: Volbeat is a Danish rock/metal formation, so how do you gel with the rest of the band on a personal and cultural level given the fact that you’re from America?

Rob Caggiano: It’s actually quite easier than one might think (laughs). For one we connect on a musical level. The fact that I’m from New York and they’re being from Denmark doesn’t really matter on the level of activity and touring Volbeat operates. We’re all living on the road in a tour bus. That’s the reality of it. I’ve been doing this for years. Even with Anthrax I did little else. With Anthrax we didn’t see each other much. Frankie (Bello) and I did, but the rest of was spread all over the US (laughs). Of course the Volbeat guys speak Danish among themselves, but they also speak English. We connect on a personal level and I really love the guys. It’s all about the music. There are only twelve notes to play, doesn’t matter whether you’re from Denmark or the US (laughs).

Raymond: So what are the main differences between playing in Anthrax and Volbeat?

Rob Caggiano: There are definitely more chicks in the crowd now (laughs). The whole transition was so organic and natural to me that I really didn’t have to think about it. There is so much room for guitar playing and having fun both on stage and in the studio with Volbeat. I’m just having blast. Anthrax was never a creative outlet for me at all. That’s why I got burned out on it and that’s why my heart wasn’t in it anymore. I had to to move on and the Anthrax guys really understood this. Volbeat is my creative outlet, I love the music and I’m playing more guitar than I ever hand, so it’s great all around. I don’t mind seeing more chicks in the crowd either (laughs).

Raymond: You mentioned it a couple of times that being in Volbeat is all about living on the road. It isn’t the most healthiest lifestyle around, so how do keep yourself in shape both mentally and physically?

Rob Caggiano: That’s a really good question. I think the key is getting proper sleep. Some of the other guys (in the band) have been struggling with that. Some people have problems sleeping in the bus. I personally don’t, I sleep as a baby in a bunk. I’m used to this, so I’m fine. Another issue is eating properly, because it’s isn’t easy finding healthy food when you’re on tour. It’s tricky, but once you’re doing it for a living as long as I’ve been doing it, you’ll find your groove and it becomes routine. You know what to do and what not to do. It becomes second nature. It also helps to keep the party antics in check (laughs).

Raymond: You had a pretty good run as a producer, including one or two Cradle Of Filth albums. With a band as active as Volbeat how does this affect your career as a producer, if you still aim for one that is?

Rob Caggiano: One of the Cradle albums actually got nominated for a Grammy (laughs). This is a good question as well. You know, a few years back I made the decision to focus my production stuff on bands that are either very close to me or bands that I’m actually in. The last three albums I produced were with The Damned Things. We finished that record and went straight on the road. The same with Anthrax’ Worship Music. The same happened with the Volbeat record. Producing records is one of my passions and I will always keep doing it, but right now my focus is on touring and playing live. When my schedule permits I’ll get back into the studio (laughs).

Raymond: I guess the ever shrinking recording budgets and the fact that many bands produce themselves nowadays doesn’t help either..

Rob Caggiano: You’re absolutely right. The whole climate of the music industry had changed dramatically. It’s changing by the second it seems (laughs). Over the years recording budgets got lower and lower and the quality of the recording output is diminishing as well in my opinion. Not across obviously, because there’s still some amazing stuff coming out. All this contributed to my decision to focus on either the bands that I’m creatively involved with writing-wise or bands that are close to my heart.

Raymond: Finally, with this in mind what is the added value of having a real producer involved?

Rob Caggiano: I could talk about this forever (laughs). For me what a record producer is capturing the energy of said band and bring them to the next level. This could mean a gazillion different things. Some bands need work and direction with their arrangements and other ones need help with the lyrics and melodies. There’s also the capturing the performances of the playing and getting the magic takes. It’s all about chasing that right kind of energy and atmosphere. You really need to have a vision. In my opinion there are a lot of people out there that are recording engineers that can spin a good sound, but that doesn’t make them a record producer. A lot of the younger bands that produce themselves are really good at it. There are a lot of talented people out there nowadays. There’s more to it than making things sound good. That’s the easy part in my opinion. Creating something special that actually moves people is a totally different thing. Sometimes you’re a shrink, a referee, the guy in the middle and something you’re a father figure (laughs). It’s a very intense and stressful job. 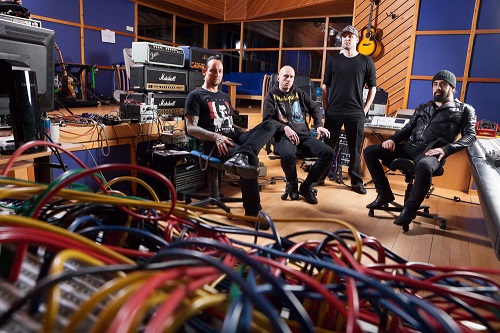