Walsall’s rising rockers Stone Broken release their debut album All In Time on January 29th. In December, they played their album launch show and biggest headline date so far at Wolverhampton’s Slade Rooms. Before the show, frontman Rich Moss chatted to Paul Davis of Midlands Rocks.

It’s been quite a build up to tonight’s launch show. How does it feel now the day has finally arrived?

Well, like you say, it’s been a huge build up, so the past month, it’s all we’ve been thinking about. It’s actually a relief. We get here, set up and that’s when we know it’s going ahead.

It feels great, we get to headline the Slade Rooms. All the preparations are done, it’s quite stressful putting the whole thing together. But with Pete (Peter Keevil, TMR Band Services) on side, it’s a lot easier.

You were originally planning to record an EP. How did that become your debut album All In Time?

We spoke to a few people and asked if this was a good thing to do. We spoke to PR people and they said yes. So, we sent the old tracks back to Romesh, our producer, he remastered the whole thing. That’s kind of how it happened.

How does songwriting work in the band? Are you all involved with that?

We are, in some degree. We get to our rehearsal space and someone will play a riff or have an idea. Once we have the ideas we want to go ahead with, we’ll start working on them together, making sure that we can make a decent song structure. A lot of the lyrics and melodies I work on myself while the other guys work on their parts.

From the new tracks that you’ve recorded, do you have any favourites yet?

I think there’s three. Obviously, ‘Stay All Night’ because that’s the lead single , I really enjoy playing that one. ‘Not Your Enemy’ because it’s an all out rock track and also ‘Wait For You’ because it’s a little bit softer, I can use a bit more of my emotion in that song.

Going back to that first single ‘Stay All Night’, you’ve gone onto the ‘B’ playlist at Planet Rock. We’re not just talking a couple of plays on the New Rock Show are we, this is a big deal isn’t it?

It is, it’s huge for us. In the space of a week we were playlisted on Kerrang and Planet Rock. Like you say, usually bands like us, we get played one time and it’s on Wyatt’s show or Johnny Dooms show, late at night.

You were played at 8.30 in the morning on Paul Anthony’s show.

That was the first time we were played on Planet Rock and it was amazing. We didn’t even realise we were going to be played until we started having tweets and Facebook messages.

How have things changed since signing your management deal?

The main thing is there’s a bit more structure now. Not to do with music, but the behind the scenes kind of stuff. Pete’s taken a lot of the marketing and PR side of things on. So we can concentrate on the music. It’s also taken us into other avenues like Planet Rock and Kerrang Radio.

Who are the bands that have influenced Stone Broken?

There’s a huge range. It would be a different answer for everyone. But, as a collective, I would say the likes of Black Stone Cherry, Alter Bridge, Theory Of A Deadman.

What would be the dream support slot for the band?

Any of the above! Black Stone Cherry would be absolutely mental. But I do have a soft spot for British rock and roll bands like Heavens Basement. So, we would love to support anyone who’ll have us!

There’s a few things on the horizon. The album comes out January 29th, there will be a big push on that. We’re also looking to book a national tour, back end of March, maybe April. There’s some festivals in the summer, we’re playing in Scotland at Wildfire Festival. Also RockWich in Cheshire and Upload Festival.

We’ve played outside the West Midlands a few times but we really need to try and establish ourselves in the other cities. 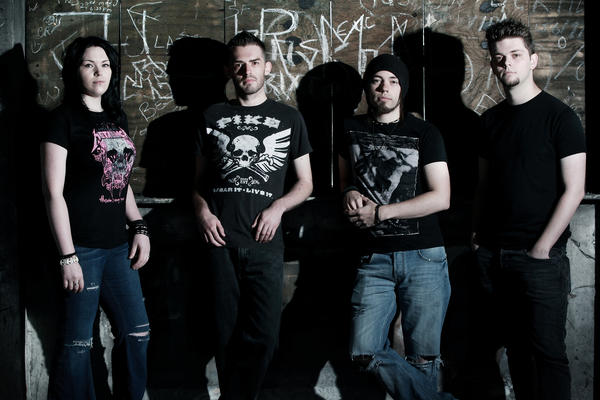