Anglo American rockers Legion have released five albums in three years. On the eve of their latest release ‘V’, Woody wanted to catch up with lead vocalist American Phil Vincent and talk about it and his song writing partnership with Black Country guitarist Vince O’Regan.

You are about to release your fifth album with Legion – V. What can fans expect from the latest Legion opus?

I think this album contains more consistent material throughout. You see, the usual process with Legion is Vince sends me the music, I write and record the lyrics and vocals send them back to Vince, he mixes and masters them, then when we have about 13 or 14 songs completed, Mark Alger from Z Records picks the final track list.

On “V” he sent me the final song list and I didn’t see “House of Cards”, which is my favourite song on the CD so I e-mailed him and Vince and asked to include it. I didn’t understand why it wasn’t there in the first place but it’s there now!

The album sounds fantastic. Vince has received a lot of undue criticism for his production abilities and since I am an audio engineer I can’t figure out where those complaints are coming from. If these people are listening to the CD on computer speakers then the problem isn’t with the production! *Laughs*

You have a prolific song writing partnership with English guitarist Vince O’Regan – who seems to have found a partner finally who shares his musical vision. What’s it like working with Vince and how do you feel about your song writing together?

Vince is a massive talent who should be far more popular than he currently is. His sense of melody and dynamics is phenomenal. I get very excited when I see a new song in my in-box. He’s also an extremely nice guy. We didn’t meet face to face until after the 2nd CD “Code of Honour”. Out of all the songs we’ve written there was only 1 or 2 that Vince wanted changed in some way. We work very well together and I’m very fortunate to have this opportunity.

You have produced five albums in three years with Legion. If I’ve had one quibble about the band it’s I feel on a couple of albums some weak tracks have slipped past quality control in order to get albums out more frequently. Are you happy enough to pump albums out so quickly?

Vince and I don’t pick the final track listing. I wish I was asked my opinion but that’s not how it works and to be fair to Mark, it’s his money going into the CD production so he should have his input but I think I have a pretty good grasp of what people like to hear. I use my Facebook page as a gauge. I’ll post a tune up there and see how many “likes” it gets just to see if they’re hearing what I’m hearing. That’s one of the reasons I fought for “House of Cards”, it ALWAYS gets the most positive responses when I post it.

As far as pumping out the albums, Vince sends me a lot of material so we could have probably put out 8 albums in this time frame! We also want to change up the content a little so you might hear a song or two that’s slightly different than the rest of the album but that’s by design so what you may say is “filler’ is really experimentation.

V is a really strong album overall and whilst retaining the Legion signature it feels really fresh and I’d go as far to say it’s the best Legion album yet. It feels more complete, more hooks and more variation. Was it your goal to write an album that gave fans something a little new and varied?

Thank you Woody. Yes. That’s always the goal. If you release so many albums so close together you have to be cognizant of repeating yourself. But Vince’s production of “V” is MASSIVE and I think with new equipment and new perspective, the sound should progress and so I’m very appreciative of your compliments. As much as people probably don’t understand this, it’s VERY hard work to write songs so quickly, especially the lyrics. To date, I’ve released 14 solo albums, 4 with my band TRAGIK, 3 with my band D’Ercole and one Circular Logik CD. All available on cdbaby.com and itunes (shameless self-promotion, I know!). So it’s a lot of work to stream ideas across instrumental pieces of music but I love a challenge. 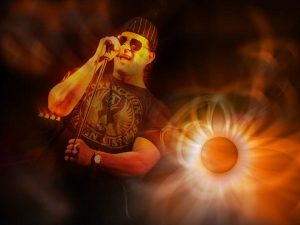 Can you talk to us about a few of the songs on the album and any meanings or stories behind the songs?

I don’t like to talk about what the lyrics are about because I try to write material that could have multiple meanings to multiple listeners. Like when I first heard ‘Addicted to Love’ by Robert Palmer. I thought it was a song about being addicted to love, but over the years I’ve heard stories he wrote it because he was addicted to cocaine. I like to leave it to the listener.

Are there any plans for Legion to perform live in the future especially here in the UK?

Unfortunately, travelling out of the US is not something that is a logical thing to do for me right now. I have a full time engineering career that requires me to be on call in case of natural disasters and I have family responsibilities that require my frequent attention. I wish the guys in Legion could fly here because I have built a moderate size fan base over the years and people ask me all the time if we could play live at this venue or that venue but I have to tell them it’s not financially prudent to fly 5 musicians, with their techs, here. It’s much easier to fly me there but maybe things will change. Who knows what the future holds!

If Legion could hook up with any other bands to tour with whom would you choose and why?

Judas Priest, Winger, Foreigner… the reason why is obvious, great musicians, great songs, devoted fans, I would be in heaven.

You are an extremely busy musician and write solo albums as well as working with other bands, can you tell us about any other projects or releases you have coming up?

I am currently working with David Zychek, from the band Airborne, and drummer David Prater, (producer of Dream Theater, Firehouse, Texas Hippie Coalition and also the drummer for Santana at one point). It’s the heaviest music I’ve ever done. Zychek plays the guitars and bass, Prater plays the drums and handles the production and I will be singing and screaming over it all! *Laughs*

David Prater will be coming to my studio this winter to record my vocals and then he’ll mix and master it.

Is there anything else you’d like to add or say to Midlands Rocks readers?

Thank you Woody, so much for taking the time to ask about Legion and my other projects. I hope I’ve answered all the questions thoroughly and avoided redundancy! *Laughs*!

If you would like to hear more Legion, Phil Vincent, Tragik, D’Ercole or Circular Logik please go to itunes,  http://philvincent.com or http://www.philvincentbands.com, and you can also download 8 unreleased songs from my vast catalogue for FREE! It’s my way of saying “Thank You” to the fans that have stuck by me through all the years and it’s been quite a while if you think about it. 1997 was a long time ago. Take care and KEEP ROCKING!