That’s too much of a monkey with an organ…

On 15 April 2016, Belgium’s Alkerdeel returned with their third full-length, Lede (released through Consouling Sounds). While the muddy and filthy sound is still present, the music has evolved towards a more direct and head-on approach eschewing most of the sludge influences in favour of old-school influences and the kraut-like psychedelics at the fore. Here, vocalist Pede talks to MR’s Jason Guest about the album, its concepts, recording live, improvisation, the band and its evolution and farting devils…

Hi Pede. This is Jason from The Midlands Rocks (based in Birmingham, UK).

Ha! Birmingham! Have a very good friend in Dudley and visited the city during a late snowblast three years ago. Good times!

Thank you very much for taking time out for this interview and congratulations on Lede. Your first album in four years, what did you want to achieve with the album?

With pleasure Jason. We have this old Osmose tour poster on the wall of our rehearsal room, dating back from ’95 with Absu and Sadistik Exekution on it. The title says “Sex, drugs and Rock ‘n’ Roll”, so maybe that’s unconsciously our goal.

What kind of progress / development does it mark for the band?

Musically, the sludge/drone parts are pushed to the background in favor of some influences that we hadn’t gone deeper into before such as death metal, crust and even some kraut or psychedelics.

We do not really sit down and start to write a new album, we just continue writing songs. So mostly there’s a logic evolution between the songs, they can influence each other but also be a contra reaction. As we’re really slow in composing this phenomenon can also happen within the song itself. We had worked for months on the atmospheric intro of “Lede” for example, becoming completely fed up with it and almost threw it away, which explains the more punky nature of the other parts of the song.

We wanted the album deliberately to be an aggressive album. People expected us to go further into the experimental field because of the collab with Gnaw Their Tongues. After Morinde came out, some pushed us even in the Depressive Suicidal genre because of the slow and heavy pace of certain parts of the album, while we actually loathe that segment of the genre.

We had a clear idea of the sound itself: the album had to sound as if the listener was standing next to us in the rehearsal room or a live gig. This doesn’t mean we aimed for a lo-fi, bedroom recording – that’s something else. We wanted a natural sound, no processed studio sound. It’s an aim we always had, even in the beginning, when using two track recordings. The producer (Frederik Segers from the dutch krautrockband Stadt), with whom we worked on the GTT collab and split with Nihill, totally gets our view. He’s a pleasure to work with and even introduced some new tools, such as this mic which allows me to sing in the same room as the rest of the band.

“Lede” can be many things. It could be an uninteresting town in Belgium, it can be translated as “sorrow” but it can also be the dialect word for “a wet fart by an old woman”. You may decide yourself and make conclusions.

The album has a gatefold vinyl release and the inside of the gatefold shows a two page comic, that illustrates the concept, which reaches back to themes on Morinde and the split albums in between. I don’t like to write about it, rather discuss it face to face. As we almost never publish any lyrics (except from the lines on the backside of the split with Nihilll) I do understand it’s hard for the outsider to trace the concept … Have you seen Being John Malkovich? There’s this 1/2 floor in between two levels of the building, that can only be reached by blocking the elevator? It’s some kind of portal. Take this idea, relate it to the comic and even the clip for “Dyodyo Asema” and you might get an idea. It is impressions and childhood fantasies, that evolved during growing up with some acid sauce of Belgian surrealism on top.

The album was recorded live. How much preparation did the band undergo in readiness for the recording?

We do not rehearse more when coming closer to a recording. We rehearse once a week and if there’s a need to record, we call Frederik, go to the studio in the morning, have some croissants and coffee, make sure everything is set-up at noon, try some of the new tricks and tools, have some more coffee, record song by song, if possible in one take, mostly two, choose the best parts, go to a restaurant, have an aperitif, dinner and say goodbye. And another afternoon, there’s some more coffee and eventually, some mixing. 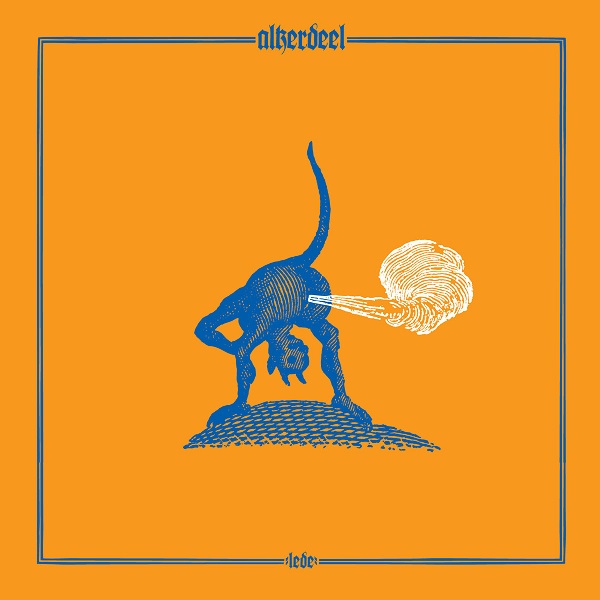 The artwork is orange and blue because I knew it had to be that, combined with the image of the farting devil. Orange and blue is also the color of a not so much attended youth movement in Belgium (KSA), and many people dislike their color combination. There’s this comic “De Amoureuze Amazone” from the Suske & Wiske (Spike & Suzy) series, that takes place in space, and had a mysterious orange sky. Also, if I would go through box of vinyls in a store, finding an album with these colors, I’d be interested. Actually, the comic at the inside of the sleeve is older than the cover. The devil appears in the final version of the comic, but originally I intended to draw some figure with a donkey head. When coming across on an old book about witchcraft in England (“Prince of Darkness: A Witchcraft Anthology” by Gerald Verner, 1947), I found this engraving of the little devil. The original engraving is by Jacques Callot ‘The temptation of St. Anthony’ and I immediately knew that little dude had to be in front and be the protagonist of the comic. It relates to the music in the way it’s provocative and unbalancing. 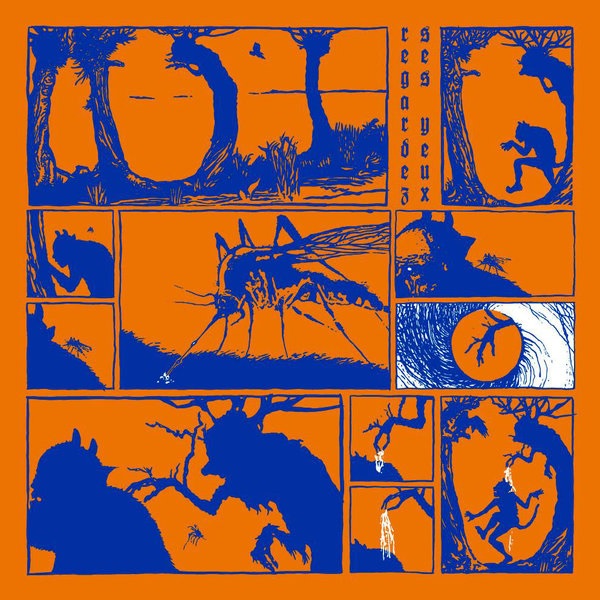 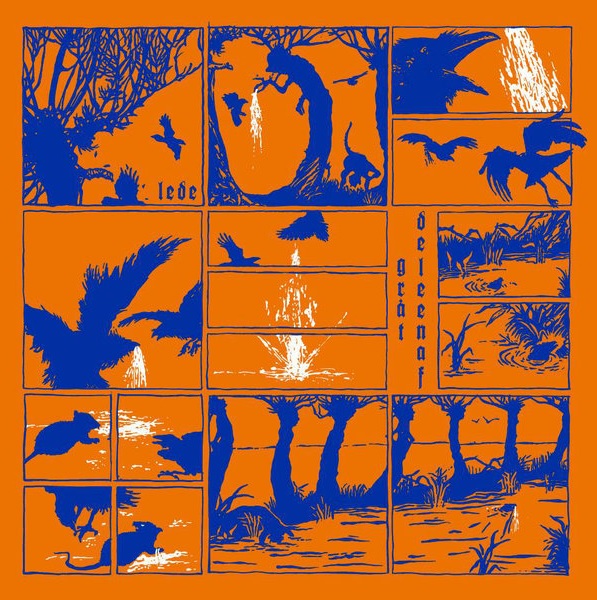 About the band, can you give us some background on Alkerdeel? What drew you together to form and create music under this name?

We’re all from the same area, close the Ghent, in a region called “Meetjesland” (“Land of old Women”), which is in East Flanders, the northern, Dutch-speaking part of Belgium. Nieke (drummer) and Pui (guitars) are childhood friends, while QW (bass) and me were in the same class at school when we were 16. I met Pui at high school. I was into tape trading, saw a dude with some fancy shirt, approached and asked if he was into trading. Back then, there used to be a very cool and known metal bar in Ghent, called the Frontline, and attended by everybody with a little bit of appreciation for the riff, so we would have met anyway. I used to write for a metal zine, but got fed up by writing about music and wanted to create. I was really into primitive black metal and sludge/doom that period, nobody was playing these styles and Pui seemed to have a similar interest. As his current band – Headmeat – ceased to be, he asked his good friend Nieke to play drums. QW stepped in, after his main bands Thee Plague of Gentlemen and SerpentCult went on ice. He had been showing interest for ages, and although we knew somewhere in the back of our heads he would end up with us, we thought it was funny to let him wait more than a year.

Did you have an idea or a vision for the band’s music when Alkerdeel first started?

Yes. Ildjarn and Darkthrone mixed with Burning Witch and Eyehategod. That’s what it really was. “Let’s mix these four bands.” Actually, we played one gig under the name of “Dark Torre” (Dark Fart – farting again. It really is unintended!), playing Ildjarn medleys mixed with Iron Monkey and EyehateGod riffage. The experience was amazing so we decided to go on yet with a better name. At first we even did some Merzbow noise too, but I didn’t like to turn buttons on my knees during gigs so we ditched that.

What does the act of making music mean to Alkerdeel?

Think that differs from person to person in the band. It feels good hanging out together and creating. Never expected it last so long. But that’s basically it, it feels good. The music, the whole band.

The improvisation evolved from the Ildjarn-Eyehategod medley finger-in-the-nose playing to jamming round self-created themes that eventually become a song. The only improvisation left is in the vocals. The main themes of the lyrics are fixed, even some basic lines, but around this fixed concept, I give myself the freedom to sing what comes up. Chorus-Verse-Chorus, the same lines again and again, would never work for me. That’s too much of a monkey with an organ.

What are you striving for when creating music for Alkerdeel?

We do not think about that. We just do. We could think about it but then I’m sure Nieke would implode.

Any plans for shows in support of Lede? And will we see you in the UK at any point?

Yeah, in July there’s the big “Feast of Ghent”, 10 days of Sodom and Gomorah in Ghent. We’ll play in a small, smelly and overcrowded bar full of drunks at three in the morning. Did it two years ago and it was the best ever. Then in August, Ieperfest, the vegan-hardcore-turned-metal fest with Tribulation, Wiegedood and some others. The organizer used to have this vinyl store where we bought lots of our music, so it’s cool to play there. We’re also working on some dates in October in Berlin and Prague. No plans for the UK. We’ve played London and Leeds before, loved it so if someone he who still loves some pieces of the continent reads this and is interested, drop us a line!

What would be the ideal setting for an Alkerdeel performance?

You know that barn on the cover of “Hex” by Earth? There. High temperature, smoke and mist coming through the wood. We’d be support for Darkthrone and Burning Witch. Lots of Kruger Pils.

There should be a three week trip through the US be connected to that gig too, with stops in the bayou of Louisiana, Yellowstone, NY and those fields where tornados are.

What does the future hold for Alkerdeel? Is there more music in the works?

Of course but we’re still in the post-Lede laziness. Some tics that hint new creations are becoming visible. But first summer and holidays.

Thanx so much for the interview Jason. Invite us to Brum so we can have a drink and play a tune. 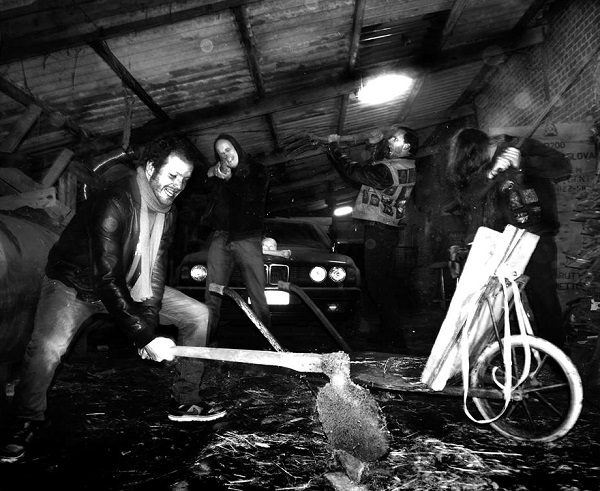