“When you strip the blues back, it can be more powerful than a 15-man band.”

Interview by Will Harris

Later this month, funk-heavy blues-rock trio Paul Lamb & The Detroit Breakdown return to the UK for a string of dates in support of their new compilation album. MR caught up with main man Paul to discuss taking new material on the road, his upcoming acoustic blues album and a brand new soul-injected project.

Hi Paul, great to speak to you again. How are things?

Good, things are well; looking forward to coming back to your wonderful country.

That’ll be the second UK tour in just over six months; how was the last one?

The last tour was fantastic, it went great.

Was it good fun taking Ready, Fire, Aim out on the road?

It was. It’s always fun doing new material and all of that stuff we’d never really debuted on stage before, so we almost played the entire album live. It was a lot of fun.

You said last time we spoke that you often find that the songs evolve while you’re gigging. In what kind of ways do they change?

Live we never play the same song the same way twice. And somebody’ll do something, y’know maybe Joey’ll do a bass lick or Layla’ll do some sort of drum fill or I’ll do some sort of lick, and that particular individual will like the way it sounds, and you’ll notice it starts becoming part of the repertoire of the song. With that then, you start to play off that, and before you know it you’ve got these complete arrangements that have happened non-verbally.

Do you ever deliberately make the songs – maybe some a little funkier, others a little rockier?

I bet that’s been a lot of fun to do.

Yeah, and it keeps it fresh for us as well.

You’ve just released Take It From The Top; what made you decide to release a compilation album then?

Really more than anything it was for PR so we had something fresh for this tour. We decided that we had this collection of four albums all of which were kind of done in different places, obviously at different times, worked on with different people, so we just took this collection of songs that were most requested from radio or from fans at live shows. And then we remastered them and put them all in a package, and Ed Wolfram, the great master engineer over at Motown studios, United Sound, remastered the songs and they came out really good.

Do any of them have any special relevance to you?

Y’know, songs are so interesting; you write a song and you’re in the moment in time, and then when you record it you kind of move on, but they take a certain part of you. I always compare it to they’re my children, I like some more than others at certain times, but they’re all very close to me!

And are you working on anything new at the moment?

Yes, as a matter of fact I’m in the studio this summer doing somewhat of an acoustic blues record. Literally three acoustic guitars, maybe some piano – a real stripped-down project. Then I’m gonna go right into another blues-rock album towards the end of the year. Those are my two projects that I’ve been writing for this year, which has been interesting: putting my mind in two different places, one the traditional stuff that we’ve been doing and the other one somewhat of a departure.

What was the catalyst for the decision to do an acoustic blues album?

It’s definitely something I always wanted to do, but it actually started when I started putting together Take It From The Top, and I thought to myself, ‘We’ve got the sound, but you know what I’d like to do? I’d just like to strip it down: a couple of guys playing acoustic in a room and sing some songs.’ It’ll be something a little more traditional blues, I’ll still have the more song-oriented songs that aren’t in a 12-bar structure but I kinda wanna do both. But we’ll see what happens, ya know? But really stripped down, no really fancy production techniques, really live, just sittin’ around a microphone, old-school style.

That sounds fantastic; some of my favourite blues albums are the acoustic ones.

It’s amazing, especially with the blues, when you strip it all back and get down to the purity of the song and the emotion; it can really sometimes be more powerful that way than having a 15-person band behind you.

And what about the blues-rock album?

That’s just more of what I’ve most naturally evolved to personally and soulfully, it’s a funky, Detroit blues-rock sound. It’s real natural to me and usually when I hit the studio I’ll have 30 or 40 songs ready to go, and we’ll demo ‘em out, whittle ‘em out down to 10 good ones and then record those. So that’s the real house, as we call it.

Are there are any new directions you’re interested in taking in the future?

Yeah, actually I’ve started a new project with some fellow Detroit musicians, and it’s just a side-project that we’re just doing for ourselves right now. We like to compare it to Bill Withers or Gil Scott Heron; kind of acoustic-ky but still more of a full-band thing, with two keyboard players, a bass player, a drummer, and I’m literally just playing acoustic guitar and singing and we have another lead guitar player. We’ve been doing some pretty interesting things with that. It was another outlet for some song ideas that a friend of mine and I had that we couldn’t really accomplish in the bands we’re currently in.

Would you ever look at taking that project on the road?

Absolutely. We’re definitely planning on getting it out, but we each have our own bands that are in the process of touring so you don’t wanna bite off more than you chew! But if we really think it’s something presentable and we can move it, and we shop it and somebody digs it then yeah, we’d definitely get it out there!

Paul Lamb & The Detroit Breakdown tour the UK in May and June. You can find out more and order the new compilation album from http://www.p-a-u-lmusic.com/ 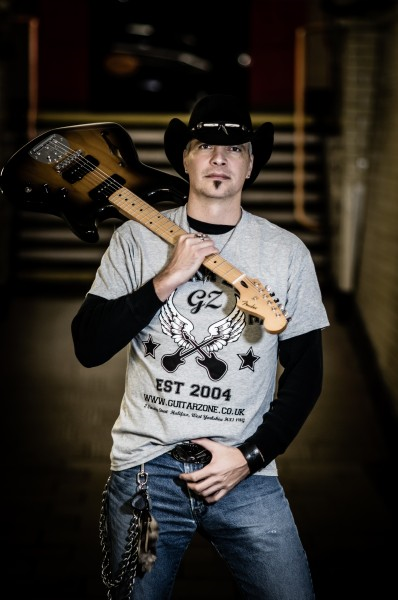