Italian duo Agatha released their fourth album Gravis Atqqe Gravior in May 2014 through Chaos Rural Records. With Pamela on bass and vocals and Claudia on drums and very loud cymbals, they make more noise than a band twice their size ever could. Here, Pamela talks to MR’s Jason Guest about the band’s history and how they became a duo, their music, lyrics, and artwork, and their involvement in Milan’s DIY music scene, their zines, and freedom from age/gender/sexual orientation stereotypes…

Hi Pamela. Thanks for taking time out for this interview. Agatha was originally a trio featuring guitarist Daniela until 2008 when Viole replaced her. Then in 2010, Agatha became a duo; you on bass and vocals and Claudia on drums. What prompted this change?

So, Daniela left in 2008 when she found out that she didn’t have time anymore for playing. I was really sad when she left, because she was my best friend and we had been playing together since when we were 14! Now she’s a big Agatha fan, and her boyfriend did the vinyl mastering of Goatness and Gravis Atque Gravior. When Daniela left, we started playing with Viole, a good friend of us from the DIY scene of Milano, and we played together two years, playing a lot live. Then after these two years when we wanted to do more heavier stuff, Viole left the band and we decided to continue in two, because we clearly knew what we wanted to do and we thought that we could do it as a duo.

How does working as a duo compare to being a trio? Does it give you more creative freedom?

Playing as a duo for us has been really stimulating. We really felt that finally we could do exactly what we wanted.

As a duo, how do you create songs? Is it collaborative or do you write individually? Do you discuss ideas about what you want each track to be about or is it an evolutionary process?

We like to jam a lot in our shitty rehearsal place, a garage super cold in the winter and super hot in the summer. Usually I play some riffs, then we work on them together, but a song can start also from a drum rhythm. The creative process is kinda free being just two.

Is there a theme, concept, or a philosophy that underpins your music?

No, I wouldn’t say that there’s a concept or something that underpins our music. We play what we like and what we feel at the moment. It’s a very direct and raw kind of making music. Music for me and Claudia is still a way of doing something different from where society and life bring you to, a way to escape the boring daily routine.

What are the lyrical themes? Where does inspiration come from?

I think that the lyrics of Gravis Atque Gravior make a change from our previous albums. Before, I really liked writing ironical stuff, some tongue-in-cheek lyrics, also because the mood of our previous releases was like that. Goatness was a sort of transition I think. Heavy sound but still ironical lyrics. With this record I felt I wanted to write more serious and personal stuff. As the atmosphere was heavier, I thought that the lyrics too had to reflect this kind of mood. There’s a song about punk and DIY, there’s one about death and the end of life we will all have to face, there are also some more militant songs, about feminism, femicide and freedom from age/gender/sexual orientation stereotypes… The inspiration simply comes from the things I like, I see, I read and I feel 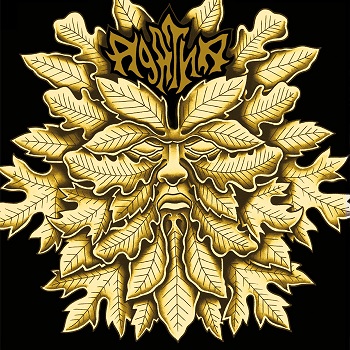 The artwork for Gravis Atque Gravior is intriguing. Can you tell us about the artwork and what it represents? Who designed the artwork? Why did you choose to work with him/her? And how much direction was given in its design?

For the record we wanted something related to nature, but also something decadent, autumnal. That’s why we thought about a green man, a mythological subject made of leaves. Our good friend and tattooist Marra Teppalife offered to paint it, because he really enjoyed the record and the subject, and that’s how the artwork was born. This is our second collaboration with a tattoo artist. The artwork of our previous record, Goatness, was also made by an Italian tattoo artist, Pietro Sedda.

Can you tell us about Chaos Rural Records and how you came to work with them for the release of Gravis Atque Gravior?

Chaos Rurale is a DIY label from East Canada. When we were looking for labels Mathieu contacted us saying that he really enjoyed Goatness and he regretted that he didn’t help us at that time and that he wanted absolutely release our new record. That’s how everything started. It was really cool working together on this project from one side to the other of the ocean. And it was really funny after month of mails in English to discover that we were both more comfortable with French.

Do you plan to stay with the label for future releases?

At the moment we’re not planning releases in the immediate future, but of course why not!

According to your Facebook bio, you’re both active in the punk DIY scene of Milan organising shows, being in collectives and printing zines. Can you tell us a little about the scene, the bands, the shows, etc?

Milano is a quite active city for punk shows, collectives and squatting. In the last years the scene is getting bigger and more active and we’re really happy about it. There are some really cool bands (Ojne, The Seeker, Class, Holy, Fiele, Essere, Cospirazione, Corpse…). I once wrote a report on the Milano punk scene for the American label No Work Records (the label based in Florida who released the tape of Gravis Atque Gravior). Here’s the link for an exhaustive report on that. Both Claudia and I have other musical projects: she plays in an indie-new folk band called Pueblo People and I play bass and I sing in an emo-punk-rock band and I play drums in a lo-fi-acustic duo called Malaise. I am a part with other 5 friends of a feminist non-mix collective called Queens Of Chaos with whom I organise DIY punk shows in squats, workshops, meeting, vegan benefit dinner and many other stuff.

Which zines do you work with? What’s their focus? And where are they available?

With Queen of Chaos we print our zine where we talk about feminism, sexism and omotransphobia and of course also about music. Usually we have them with Agatha when we tour. 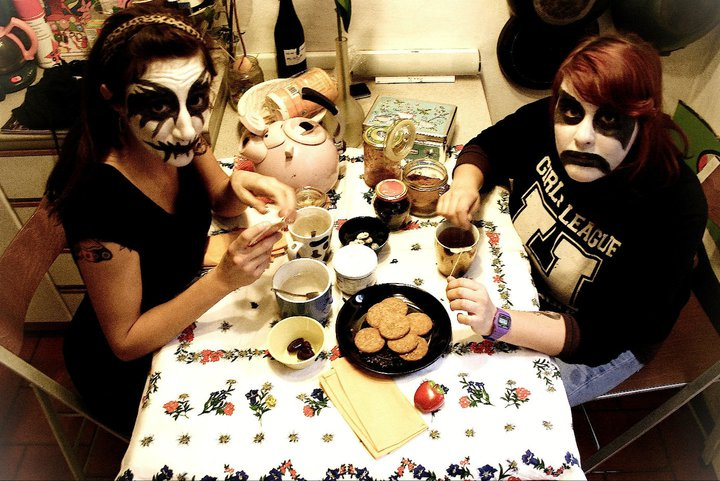 What’s next for the band? Is there more music in the pipeline? Any gigs or tours planned? Might we be seeing you in England any time soon?

As I was saying before we’re not focusing on composing new music: we’re really enjoying playing live this new record so we’re playing as much as we can. And of course, as always we do have touring plans, the problem is that life is shitty and we can’t tour all the time because of our jobs. But we already have some really cool shows already booked till summer 2015: we’re playing again in a festival in Sweden, then in a Festival in the South of France and then some other cool stuff in Italy and in France again. Our big plan for this summer is to go to the States and Canada at the end of August. We’re focusing on it, and we really would like to. We toured the UK in 2009 and we loved it, so yes, we totally would like to come back and we hope to do it soon!

Ciao ciao and thanks for the interview.