Birmingham has constantly spawned artists, venues, labels, and collectives, and will continue to do so…

Another Midlands band for your grind entertainment, the recently formed Our Earth’s Blood take time out to talk to MR’s Jason Guest about all things noisy, grindy, and gory…

Can you give us some background on Our Earth’s Blood, how the band formed and what drew you together?

Luke (Vocals): Well all of our members have been around the Birmingham music scene for years. We have all played in various bands (Another band I am vocalist for is VICIOUS BASTARD) and have gotten to know each other through gigs etc. The rest of the guys got together to create something raw and fresh and I was called in to help complete the line up.

Chris (Bass): Yes, we have generally, and separately – been around for a very long time. Scott, who plays guitar – has served time and released records with GODSIZE, who were going for a very long time, he now plays in Burden of the Noose. I have been in a host of local bands, including the heavy I AM COLOSSUS, and more recently – a five year stint with SELFLESS. Rich and Baz worked together in WRONGDOING. SELFLESS split January 2015, following the release of the third 7” and third album…. I just spoke with Scott, who had recently joined SELFLESS, and we decided to stick together, and put a power violence-influenced grind outfit together. We formed Feb 2015.

Who and what are the band’s main influences? And how have they influenced the band and its music?

Luke: I think what makes this band work is that we all each have our own sets of influences, whilst still sharing the common goal of creating nasty, loud music. I, for instance, have always been drawn to the extremes of the fast and the slow, learning my trade through observing other enigmatic frontmen and creating a real stage presence.

Chris: A running thematic includes annoyances, everyday life annoyances, whether it be phone/technology addiction, door step political canvassing, or old knee injuries form skating… Luke brings the blood. We are conscious of our surroundings, and everyday life – it destroys a little of the fabric of our surroundings simply by the way we live. We can make changes to reduce pollution, waste, suffering – but we (People) do not.

Chris: From Man is The Bastard. An act I have been intrigued with since the mid 90’s. We didn’t want to sit around and think of band names. It fits what we do. Our Earths blood – it’s important.

How does the band write? Do you write individually, collectively, jam on ideas…?

Luke: Again, I think the beauty of this project is that our own experiences in the music scene have helped us be able to bring in material to the studio and work it together to create something well brutal and uncompromising. Often times one of us will come to practice with either a finished song (which never ends up untouched!) or even just the odd riff or structure idea then work from there.

What are the lyrical themes in the band? Where does inspiration come from?

Luke: Well, being a huge horror/gore geek I have to say that this usually comes through in my lyrics. Without trying to write songs containing huge amounts of gore and direct references to films I aim to capture the nastiness of human nature and the futility of life and all its trials. Our song “Escapism Through Gore” relates to using horror and exploitation films as a means of escapism and a coping mechanism to deal with people in your life who you just wish weren’t there.

Chris: I agree with Luke, music is an art form, and art forms celebrate escapism. Music provides an outlet for communication, or for simply letting off steam. Inspiration is drawn from horror movies, personal feelings, frustrations, yet there are elements that refer to our pasts, skating, thrash.

You’ve been playing shows around the Midlands and have more coming; how healthy do you think the local scene is at the moment?

Chris: We have generally kept a low profile gig wise. A lot of hard work goes into a show – for any band. We want to play, but play when we want to play, and with who we choose too, hence a forthcoming event with our good friends CEREBRAL SCAR in Northampton. Mark Freebase (C.S. vocalist) is a good friend, and C.S., we feel, are very much on our wavelength. The right elements for the right show. 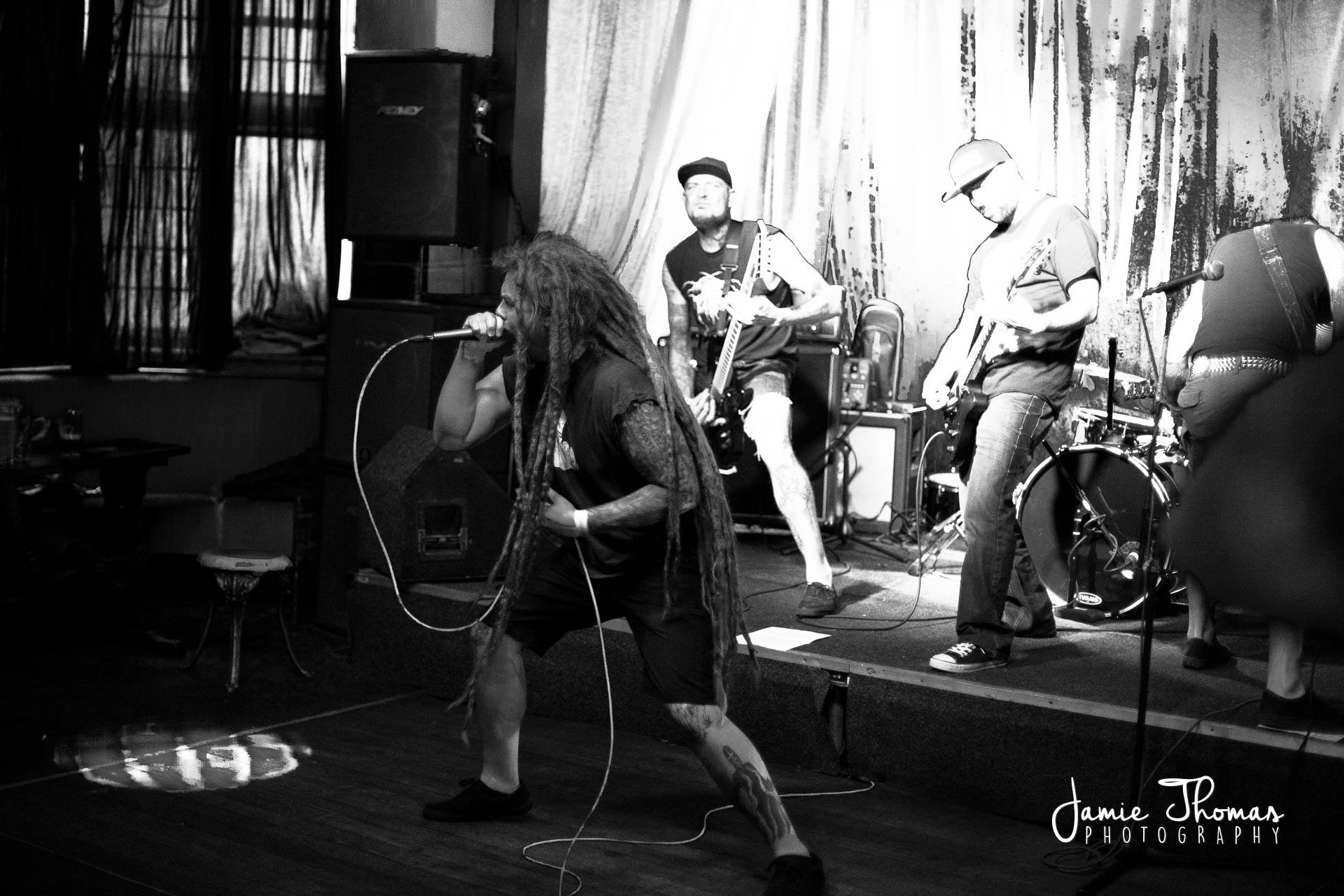 You played Fearfest (Asylum 2 on 10 and 11 October) on the Saturday, the same day as Benediction and Cerebral Fix. How did you come to be involved in this show?

Chris: The event promoters (Fear Me! Music) are a very very cool couple, who wanted a new, fast and exciting act to support Bennie and Fix. We are also great friends with members of the bands, so it just happened. It is Benedictions only U.K. show this year, so we are super grateful to be able to be part of that.

What are your thoughts on the Midlands being identified as the Home of Metal? Is heavy metal entirely dependent upon the social, cultural and economic factors that affected this one particular area?

Chris: It is where the leading lights came from obviously, and we do not need to mention the prominent acts. But to be brutally honest, there are other parts of the U.K. that have spawned incredible scenes/bands also (Newcastle ‘Neat’ scene). More U.K. HM bands do not come from Birmingham than those that do. The biggest true Heavy metal band in the world – IRON MAIDEN, they are not for Birmingham. I would suggest metal is dependent on its supporting factors. Industry draws people, culture provides art and social connectivity, and economic factors provide leeway for people to be able to encounter and express themselves in relation to any given interest. This can be relayed to any given area in any city / country. Birmingham does not celebrate its history – Birmingham talks of its metal heritage, but not enough is done physically to celebrate it constantly. But, it cannot be denied – Birmingham has constantly spawned artists, venues, labels, collectives for a very very long time, and hopefully it will continue to do so.

Luke: Yeah we are slowly getting more and more gigs presented to us. In the month we are played at The Bear in Northampton on 3 October, The River Rooms in Stourbridge on 16 October (Supporting our guitarist Scott’s band Godsize) and we’ll be playing Scruffy Murphys in Birmingham on 13 November. Hopefully we will be getting many more gigs over the coming months!

What does the future hold for Our Earth’s Blood? Any plans to release any material?

Luke: We will be recording and releasing a demo tape (yes, tape!) in the coming weeks as well as a proposed LP later on down the line. We are also currently working on a merch line so we will have tees etc. for sale at our shows.

Chris: Yes, we are planning to record an album early in the New Year; there is also talk of involvement in a compilation LP featuring a host of cool U.K. bands.

Luke: I suppose the main thing I would like to say is to check us out if you haven’t listened to us yet and come along to one of our shows to get your senses violated!