With Darkness Evermore recently released, Portland duo Nightfell took a few minutes, probably less, to talk to MR’s Paul Castles and reveal as little as possible about the dark world that they inhabit…

Thank you very much for taking time out for this interview and congratulations on Darkness Evermore. It’s been really well received with lots of positive reviews (including mine) How pleased are you both with it?

We are both really pleased with it. Mersky did a killer job helping us realize our vision.

Was it something that you had been working on for a while or did things come together quickly?

Is there any particular theme or concept behind the songs? 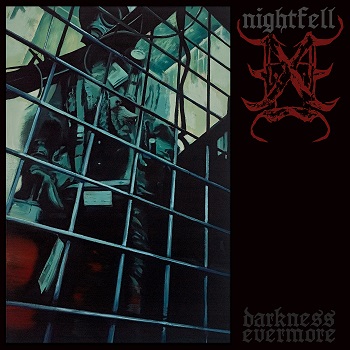 Can you tell us where it was recorded and what producer you worked with?

Who is responsible for the album artwork?

Carl Auge, amazing artist that played in HHIG with Todd.

What are the origins of the band – where did you both meet?

We have known each other for years, Tragedy and Aldebaran used to practice next door to each other. We had talked about playing music together many times over the years and finally the time was right.

Are you happy for Nightfell to remain as a duo or would you prefer to expand the band?

We are currently putting together a live line up, remains to be seen if for recording purposes we will keep it to a duo.

How difficult is it for you to capture your studio sound live on stage?

Darkness Evermore has great atmospherics and passion. Where do your musical influences lie?

Quite a wide range of influences between the two of us, a list would be exhausting but let’s just say it goes beyond the metal/punk realm.

Any plans to tour this album?

What’s the underground metal scene like in Portland at the moment?

There are a bunch of great bands here actually; it’s quite active, a lot of fresh blood.

Playing live, and working on a new album.