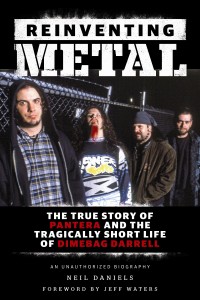 Browse through the music biographies at your local Waterstones or our very own brand new Library of Birmingham and you are almost certain to see the name Neil Daniels on the shelves. As a prolific journalist and author for a number of years Neil has built an impressive body of work. His latest book, Reinventing Metal – The True Story of Pantera and the Tragically Short Life of Dimebag Darrell, has just been released and offers a really good insight into the history of the Texan metallers. For myself, as a reader who was very much unaware of Pantera pre-Cowboys From Hell, the first few chapters are particularly enlightening. The glam metal years are Pantera’s hidden history and this part of the story makes for very interesting reading. Daniels covers a lot of new ground by pulling together recollections from those concerned – early band members, other musicians and individuals who were around on the scene at the time. The narrative also reflects on how the Abbott brothers were influenced by rock and metal musicians and in turn how much the legacy of Pantera has influenced and inspired the next generation.

You’ve taken on the history of Pantera for your latest book, what made you choose the North American metallers this time around?

I couldn’t believe that there wasn’t a serious critical biography of this important American metal band. I pitched it to a number of publishers that I’d worked with before but only Backbeat, who I’d never worked with, saw potential in the book and after a long process it was finally commissioned.

If you look at the band from Cowboys from Hell onwards you see a short body of work that is vital to the progression and growth of modern American metal. They made a huge splash on the scene and throughout the 1990s, with Slayer they were the two bands that kept the flag flying for metal. Dime was also an incredibly gifted guitarist and obviously became one of the greatest in metal.

Before Cowboys they made fun party pop metal. Don’t forget they were just kids self-releasing their own music. Their live shows went down a storm and they were hugely popular on the Texas club scene. Dime – then known as Diamond Darrell – proved his worth very early on.

They have this whole hidden history that I was largely unaware of and I actually found this the most interesting aspect of their story, what was your approach to researching the book?

It took a year – about 6 months of research and interviews and then 6 months to get the book into shape. First I started with a chronology of the band’s history and then I build the research into it and the word count subsequently grows to the 80,000 that it was contracted for. It then took several months in post-production with edits, proofs etc.

Thankfully a majority of people are on Facebook. That’s the modern world, I guess. Some friends from childhood didn’t reply to my messages but many did. I also got in touch with some producers and record label people; some refused my requests for interviews, others didn’t. That happens especially with a band whose history is as complicated as Pantera’s. Some interviews were done by email; many were done on the phone. Stuart Taylor, Dime’s best buddy, was a massive help. I also spoke with ex singers Terry Glaze, Donny Hart and Dave Peacock and they were great. It was great to have Jeff Waters of Annhilator write a foreword and Brian Slagel of Metal Blade Records to pen an afterword. 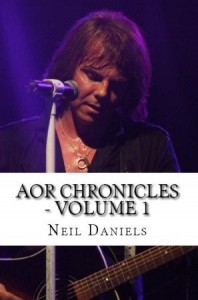 You mention in the notes that you were met with some resistance when trying to secure interviews with some people who are associated the band. Was this the worst instance you have experienced so far and it is an occupational hazard of writing about bands and what goes on around them?

Sometimes the publisher’s prefer for the artists not to get involved because it gets too complicated especially regarding money so I try to dig deeper by speaking to roadies, producers, friends, etc. I’ve been met with some resistance but you deal with it and move on to be honest.

Your books are largely highlighted as being unauthorised by the artists and written without their co-operation. I guess the benefits of this are that you can provide a balanced and critical viewpoint…

Yeah, I think so and there is a stigma surrounding unauthorised books. It’s silly, really.

Your upcoming UFO book is one I’m particularly looking forward to and they have had quite a history with line-up changes and career highs and lows. Tell us a little about what we can expect from this one…

I was asked by the publisher at Soundcheck books. It’s due out next month, finally. It wasn’t an easy book to write as they have a very complicated history and you’re right, they are very underrated, I hope fans will enjoy the book. It covers their entire history right up to this year and includes rare photos. There is a foreword from Eddie Trunk and an afterword by Pete Makowski.

Can you expand on what has been happening with your Create Space release via Amazon?

I’ve released six books via Createspace which as many people might know is Amazon’s print on demand company. AOR Chronicles and Rock & Metal Chronicles are hefty 400+ page books featuring dozens of reviews of albums mostly released over the past decade or so during the time I’ve been a writer. Hard Rock Rebels is basically my two Rock N Roll Mercenaries books (out of print) together in one 476 page book with bonus interviews. It features dozens of interviews I’ve done with members of Maiden, Priest, Queensryche, Van Halen, and many more. AOR features the “lighter” albums I’ve reviewed over the past decade and Rock & Metal features the heavier stuff while Hard Rock Rebels is a massive 476 page book that features all the Interviews I’ve done for magazines. It doesn’t include the countless more interviews I’ve done for my book work, though. Maybe I’ll put those in print some other day. I’ve written all the reviews and I’ve got many more to include in future books. I’ve also got the Rock N Roll Sinners books, previously published as All Pens Blazing, though the third volume is entirely new with exclusive interviews with rock writers not featured in vols I and 2.

I’ve got a fictional rock novel out, too, called It’s My Life. I’ve set up a page on my blog neildanielsbooks.wordpress.com which will detail all my Createspace books. You can also check out my books at neildanielsbooks.tumblr.com and I’m on Twitter (@NeilDanielsBks), Facebook and LinkedIn. 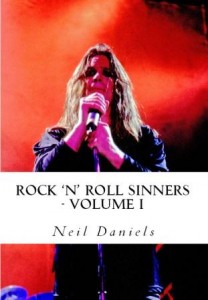 Rock n Roll Sinners includes the one and only world-wide exclusive interview with Yours Truly so I’d certainly highly recommend that one. Can you tell me more about your fictional rock novel?

I wrote it a while back for a bit of fun and when I started to work on Createspace books I saw the perfect opportunity to release it. It looks pretty cool. Here’s the premise:

“This fictional rock memoir tells the story of Johnny Cannon, an Alice Cooper tribute singer who was once in a band called The Druids, one of the most exciting and distinctive bands of the hair metal era. They released two albums (The Flight Of The Druids and Kingdome Come) and toured the UK, Europe, America and Japan. Vividly recalled and explicitly written, this “mock rock memoir” is filled with hilarious anecdotes, candid diary entries and is also a handy historical document of a bygone era. Hair metal was big business in the eighties until grunge exploded and consequently it became universally derided and a “thing of the past.” Many bands lost their record deals, folded or suffered constant line-up changes and were reduced to playing in tiny clubs. Johnny Cannon was there and he can tell you everything.

Johnny Cannon tells the history of The Druids and the hair metal genre from the early eighties to 1991 when everything changed. It’s My Life (Stories Of Excess By A Former 80s Rock Star Turned Tribute Singer) is Britain’s answer to Motley Crue’s hugely successful autobiography The Dirt.”

Self-publishing appears to be a favoured route for many, what impact do you think it is having and will have on traditional publishers, how will they survive?

It’s certainly harder to get book deals know than it was just a few years ago and sales have dropped for music biogs and advances have either stalled, decreased or been deleted in favour of royalty deals. Createspace gives writers full control but then the hard work is promoting. Most but not all of my books are out as eBooks now.

Next year looks set to be another busy year for Neil Daniels releases, what else can we expect in the coming 12 months?

I’ve got books out on ZZ Top and Bon Jovi as well as a book about the origins of a major British heavy metal band which is due next year. Go on then, I may as well tell you who it is as it’s on Amazon: Iron Maiden. In between those I’ll be working on more Createspace books.

You’ve written a book on AC/DC and sometime soon we will get your ZZ Top effort, there are still plenty of bands in between but is there anyone who would really be top of your list to write about if you could have “access all areas” to their story? Also would you consider venturing outside of the rock and metal sphere if an interesting opportunity arose?

I have lots of ideas but I wouldn’t really want to mention them online because somebody could beat me to it. And I’d love to start writing books on films and cult TV. 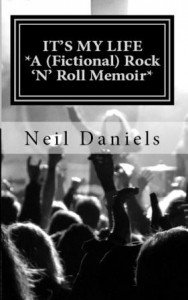 Thanks for taking time to do this interview and I hope fans like my books.

I’m on Facebook, Twitter, LinkedIn and Tumblr and I also have a blog neildanielsbooks.wordpress.com. I’d love to hear from readers. So yeah, I’ve had 18 books published with titles on Judas Priest, Iron Maiden, Journey and Metallica as well as AC/DC and Bon Jovi et al. I’ve got commercial biogs out this year on Pantera, UFO and ZZ Top and next year I’ve got a book out on Bon Jovi’s Slippery When Wet and a hefty study on the early years of Iron Maiden covering the years 1975-1983 as well as more Createspace stuff.

It’s pretty exciting. I’m not quite as prolific as Martin Popoff or Dave Thompson but it’s not a race and I admire those guys immensely. I like to move between the self-published stuff which fills in the gaps between the commercial releases.

For the very latest on Neil Daniels, head over to http://neildanielsbooks.wordpress.com/