Following in the redoubtable footsteps of Vanja Obscure could arguably be seen as something of a poisoned chalice.  The singer had helped Maltese metallers Martyrium establish a reputation as one of the hottest properties on the Med. Satanic hot.

Vanja’s theatrical visuals coupled with a no holds barred stageshow meant that Martyrium gigs were seldom forgotten. What Vanja’s bandmates didn’t realise when embarking on some European dates in support of fellow devil worshippers Batushka back in October was that this was to be her last tour with the band.

Yet barely a month later when Martyrium touched down in the UK for a series of dates supporting Abigail Williams, not only were they able to unveil new singer Mikaela Attard, but the flame-haired demoness proved every bit as captivating as her predecessor. Instantly enhancing the band’s reputation, Mikalea has in fact proved little short of a revelation in the role, although the ease with which she has taken on the Martyrium mantle is perhaps not as surprising as first seems. 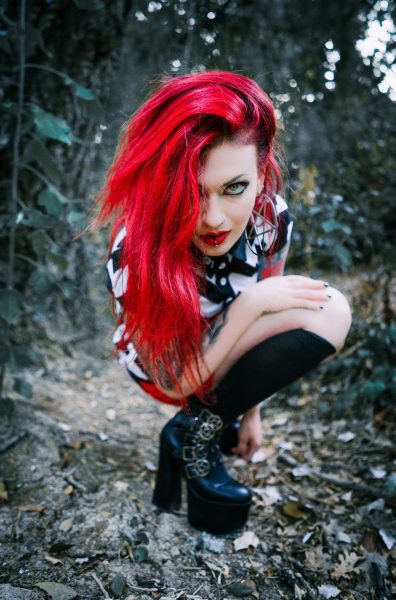 “When I joined Martyrium I was not thinking of competing with Vanja in any way, it was just about bringing my own skills to the band,” says Mikaela. “I really like Vanja and she has a style of her own, the way she looks and sounds as an artist. I saw her perform many times and I see her as a friend. I’m also related to the guitarist Count Mortem who actually formed Martyrium in 1999. Joining the band has been like joining a family for me. There’s a real connection between us already.

“I joined just before the Female Metal Voices tour and while I knew the songs actually learning to sing them is something different entirely,” she says. “They are not easy songs but I feel they have already helped me grow as a vocalist and I enjoy singing them.”

The Female Metal Voices tour was headlined by Butcher Babies, whose performing style invites some obvious comparisons with the new Martyrium frontwoman. “I was very much looking forward to meeting Heidi and Carla. They are really amazing singers who I have followed for such a long time. So to actually tour with them was awesome.”

While the #MeToo movement may make some question such an overtly sexual stageshow, Mikaela presents a coherent and balanced counter-argument which suggests the leather corsets, thigh high boots and plunging necklines are unlikely to be cast aside any time soon.

“The stage is my life and this is me, this is how I want to present myself,” she says. “I give it my all on stage and am not trying to be anyone else but me. My advice to all girls would be to go out and do what you want now so that people can see it is the real you. You should be comfortable in your own body.

“I get a lot of girls at gigs saying they love how I come across as a female figure which is really nice. Women should connect together rather than be against each other and I’m happy that people see me as an artist and respect me.”

With 2016 album Destiny Wore A Bondage Mask recorded well before Mikaela joined, she is naturally hungry to leave her own mark on the next full length studio release, the first few cuts of which have already been laid down in the studio.

While anyone who saw Martyrium perform in the UK at the tail end of last year will testify, Mikaela is a born performer but what is less transparent is how comfortable she is in the surrounds of a studio too. “I’ve just finished my Finals on a Batchelor’s Degree in Music Production at Berklee College of Music in Boston, Massachusetts, so any recording we do  fits in perfectly with my course and I really enjoy working in the studio.”

Up until recently Mikaela has been juggling her academic goals and her new role with Martyrium, alongside her solo musical project, the seeds of which saw her awarded ‘Export Artist of Year’ in Malta a few years ago. Part of the prize for that was securing some solo shows in London and now her debut solo album is also due this year. “I’m happy to be busy!” she laughs. “I keep myself disciplined and see deadlines as progress rather than something to be afraid of.”