Nothing less than black metal beauty at its most beautiful, on 24 June 2016, Le Jour Se Lève, the debut release from France’s Au Champ Des Morts will be made available through Debemur Morti. Here, guitarist Migreich talks to MR’s Jason Guest about a number of things including the band’s formation and their influences, the EP and its composition, and what we can come to expect from the band in the near future…

Thank you very much for taking time out for this interview and congratulations on Le Jour Se Lève, a very impressive piece of work. To begin, can you give us some background on the band, how you formed and what it was that drew you together to create under the name Au Champ Des Morts?

Migreich: Thank you for this positive feedback. Stefan and I met at a restricted underground festival in the centre of France in 2014. Stefan was the mastermind behind cult french act Anorexia Nervosa and I played (and I still play) raw black metal in Vulv. We quickly realised we shared the same views towards arts, analog sounds, music in general and black metal particularly. In 2015, Au Champ des Morts became a real band with the coming of Wilheim (Ex-Neurasthénie, Ex-Execution) on drums and Cécile G. (Ex-Olen’k) on bass.

Musical or otherwise, who or what influence or have influenced Au Champ Des Morts?

Migreich: Regarding our musical and cultural background, Stefan and I have a wide range of influences. Musically, we try to forge our own style at the crossroads of old-school Black Metal, early Hard Rock, Post Black Metal and Cold Wave. We’re interested in history, philosophy, religions and sacred sciences. We consider our relation with arts and music as a personal journey, a long internal quest.

What did you want to achieve with Le Jour Se Lève, your debut EP?

Migreich: Actually, with this EP, we wanted to introduce ourselves by showing two different aspects of our music: the ethereal fury of Le Jour se lève contrasting with the most atmospheric and doomy mood of Le sang, la mort, la chute.

Migreich: We had an idea of how we wanted the EP to sound and above all of how we wanted the EP not to sound. We worked on the songs for one year trying different analog and organic configurations especially for the guitar sound. We took time to choose the good distortion-pedal, the perfect amp, the special guitar, the most interesting pick-up and everything that would help us drawing the soundscapes we had in mind.

What are the themes on the EP? And where did inspiration come from?

Migreich: Most of our lyrics are about personal struggles, our internal duality (life/death; light/darkness; individual/universal), spirituality, cultural heritage, the collapsing of civilizations. Inspiration comes from our personal experience and from the way we look at the world we live in.

Migreich: The artwork represents a cross-shaped tombstone in a battlefield overhung by a sun. In this artwork you will find some of our key-elements. The symbol of the cross is really significant for us. It deals with essential notions also found in our music: the elevation of the spirit, the entrenchment, martyrdom. War and metaphoric battlefields deal with personal and universal struggles. Devastated and desolated landscaspes refer to the desperate harshness of our music.

Who is the artist? And how much direction was given in its design?

Migreich: The artist is Dehn Sora. He’s a French graphic designer/art director. He used to work with Blut Aus Nord, Manes, Code and other Debemur Morti artists. He also works for cinema and television. He’s really brilliant and we were glad to have worked with him. We gave him few directions telling him about our musical and visual symbolic interests.

How did you come to work with Debemur Morti for the release of the EP? And do you plan to stay with them for future releases?

Migreich: After recording our two demo-songs we listed label names whom guidelines and philosophy might converge with ours. Debemur Morti was one of them and Phil sent us a real positive feedback about our music. He perfectly understood what we wanted to do and what we wanted to say. That’s the reason we’ve planned to stay with them for future releases.

I see in the promo material that you haver composed over an hour of music. I take it some of that material is what is in the EP, yes? Do you plan on releasing the other material?

Migreich: Yes. The recording process of the LP will begin quite soon. We enter the Drudenhaus studios on June. The release is scheduled for the autumn/winter of 2016.

Can you give us some insight into how tell us about how Au Champ Des Morts approach composition?

Migreich: Every song idea begins with a guitar riff or a hypnotic guitar pattern (sometimes drowned in tons of effects). We are used to add layer and layer of guitar tracks to create an interesting harmonic intensity. Stefan is really talented to make order emerging from this chaos. When the first draft of the song is ready, then we rehearse with Wilheim and Cécile G. They incorporate their mark, and allow this piece of work to reach another level, becoming a real coherent song. We are used to write lyrics independently from the song and most of the time everything converge toward the perfect direction and then the magic happens.

What does the act of making music mean to Au Champ Des Morts? When writing and recording, what, if anything, are you searching for?

Migreich: Making music is a visceral need for us. We have to make some feelings and energies out. Furthermore, art is for us a way to reach a superior state of consciousness.

Any plans for shows? And will we be seeing you in the UK at any point?

Migreich: For the moment, we don’t have any plans for shows and we’re not looking for it. We are focusing on the releasing of the LP. We will give a couple of shows at a second time, we don’t know when and where for the moment.

What would be the ideal setting for an Au Champ Des Morts performance?

Migreich: The ideal setting could be an ethereal foggy atmosphere with backlight unit to enhance the “chiaroscuro” of our songs.

What does the future hold for Au Champ Des Morts?

Migreich: The future of Au Champ des Morts is the imminent recording of our first LP. We are very excited to throw these songs into the light.

Migreich: Thank you. Thanks for your support and thanks a lot for this interesting and complete interview. Stay informed about the releasing of our first album and keep up-to-date by joining Au Champ des Morts and Debemur Morti on Facebook. Longlive Midlands Rocks! 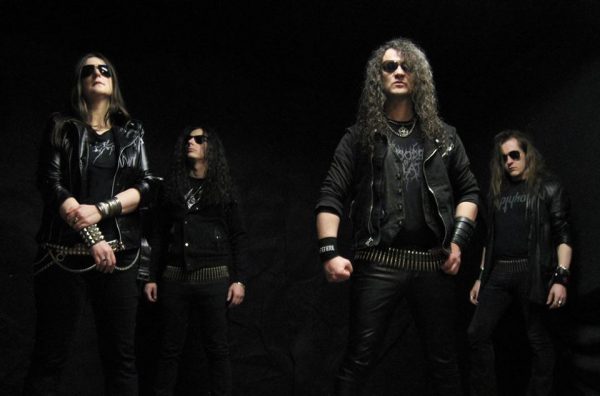