Newly signed to Moribund Records, Mexico’s Luciferian Rites delivered their second full length Evangelion of the Black Misanthropy, pure black metal barbarity, on 12 May 2015. Here, vocalist Count Shadow talks to MR’s Jason Guest about the band’s progression since their 2011 debut full length Evangelion of the Black Misanthropy, how they approached composition and the underlying philosophy behind the new album, and what black metal and the act of creating music means…

Hi. This is Jason from The Midlands Rocks (based in Birmingham, UK). Thank you very much for taking time out for this interview and congratulations on When The Light Dies (reviewed here). Musically speaking, how does it mark a progression since 2011’s Evangelion of the Black Misanthropy?

Hello Jason, greetings from Mexico and thank you for this opportunity. I think that the changes in the progression of the band are noticeable from album to album, I think that as a band we grew up a lot, the first album was a very interesting trip because it was the first studio recording for the band and a bit speedy process. It’s been a while since that and we managed to take our music to where we wanted. The rhythms have become more melancholic and varied with larger and darker songs. We are very satisfied with the result of the new album.

One thing we had very clear for this new album was the idea of producing it with an international label so they could help us with the diffusion and projection. Fortunately we made it with the help of this label and we hope we can reach places where we’re unknown and step on greatest possible stages. We are sure it’s a matter of time for us to win a place in the underworld.

I guess it wasn’t a direct idea. A lot of our music comes from our musical tastes; everybody in the band feels a great attraction to the Finnish black metal which is the 50% of our compositions and the other 50 it’s just spontaneous and works out itself like that. We work this way, Abomination (guitar) plays an idea in the guitar and the drums start to follow. If it works out, it stays. We try to enjoy each rehearsal and avoid making music by force. Everything flows easily.

I think that the process that better adapts to us it’s to simply relax and let the music flow, on the other hand, lyrics are thoughts that come up unexpected or in some other occasions come up inspired from literature of diverse subjects, most of the time comes a name or phrase to my mind and I elaborate a story from there.

A very emphasized theme in When The Light Dies is the theme of death and esotericism. I have to admit I’m a bit obsessed with that, the self-neglect, the loss of faith of everything and everybody, the hope of finding peace where there’s no life is something that gets my curiosity.

Can you tell us about the artwork, its design and what the shadowy figure represents?

We wanted to make something simple in the album art and easy to digest, the figure of the monk in the shadows represents the concept of the album, return to the roots of the own universe which is the darkness.

After some time of the release of the first album, we begun the recordings of When The Light Dies, still unfinished, we decided to contact Moribund sending some songs without voice, they asked us to send the finished album to check it out. Few weeks later, we got the answer that the album was accepted.

A lot of things have changed and will change in Luciferian Rites although we had the drop of our first drummer (Antichrist). This obviously unbalanced a little the stability of the band, fortunately we found people capable and willing to make black metal, in this almost 10 years since we started. In 2006 we keep the desire to excel, not to be the band of the bunch and I can assure you that we haven’t felt the years pass by musically speaking, we keep making music as if we were months from starting.

What does the act of creating music mean for the band?

Simply it’s everything, It’s a vital part in each Luciferian Rites member.

Black metal is a ritual for us; it’s the dark part of us that strengthens us.

Actually we don’t agree with that. It’s true that it became more accessible in last years and it’s been more commercialized, but thanks to the internet, today we have the chance to get to know bands which would be impossible to get original material otherwise or even heard of them. Black metal doesn’t change.

I have nothing against that. Each mind is a world and this concerns to each band, how they want to be listened and if that idea works out. In Luciferian Rites we prefer to do it the conventional way.

What does the future hold for Luciferian Rites? Early days I know as the album was released in September but is there more music in the pipeline?

In the short term, we have planned to start recording; we have 10 to 13 unrecorded songs. We’re trying to put together a tour in the USA and maybe release a split the next year.

Any gigs, tours or festivals planned? And will we be seeing you in the UK any time soon?

We don’t have any offerings at the moment in UK; of course we would like to be there soon. Right now we have some commitments here in Mexico and the organization of the tour in the USA, we hope next year reach Europe.

What would be the ideal setting for a Luciferian Rites performance?

We would like to play in a good black metal festival in Europe.

Thanks to you and your readers for taking the time to get to know more of the band. The new album will be available 12 May via Moribund Cult Records, hopefully you can get it. Again, thanks to everyone. 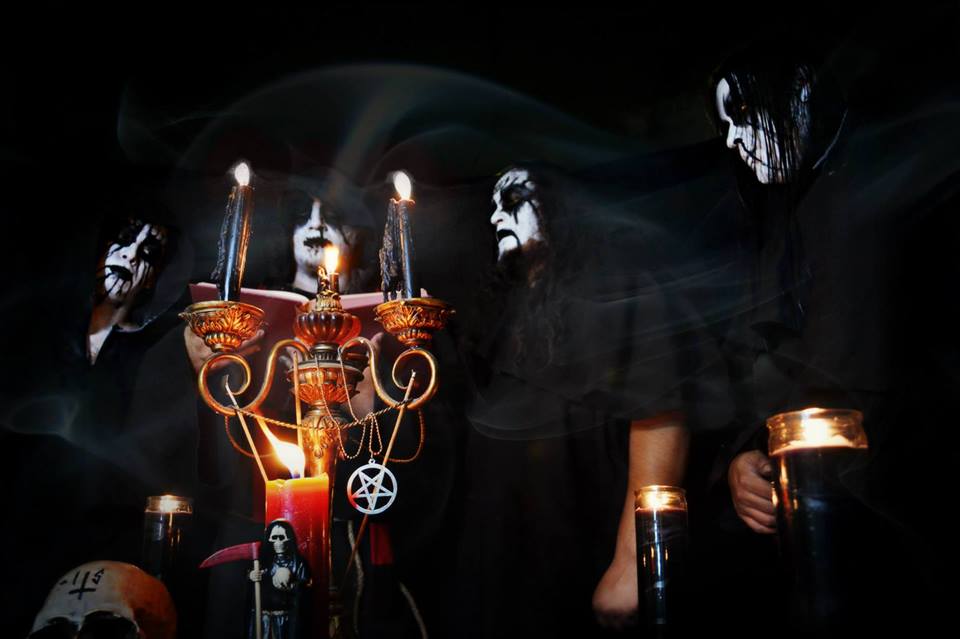